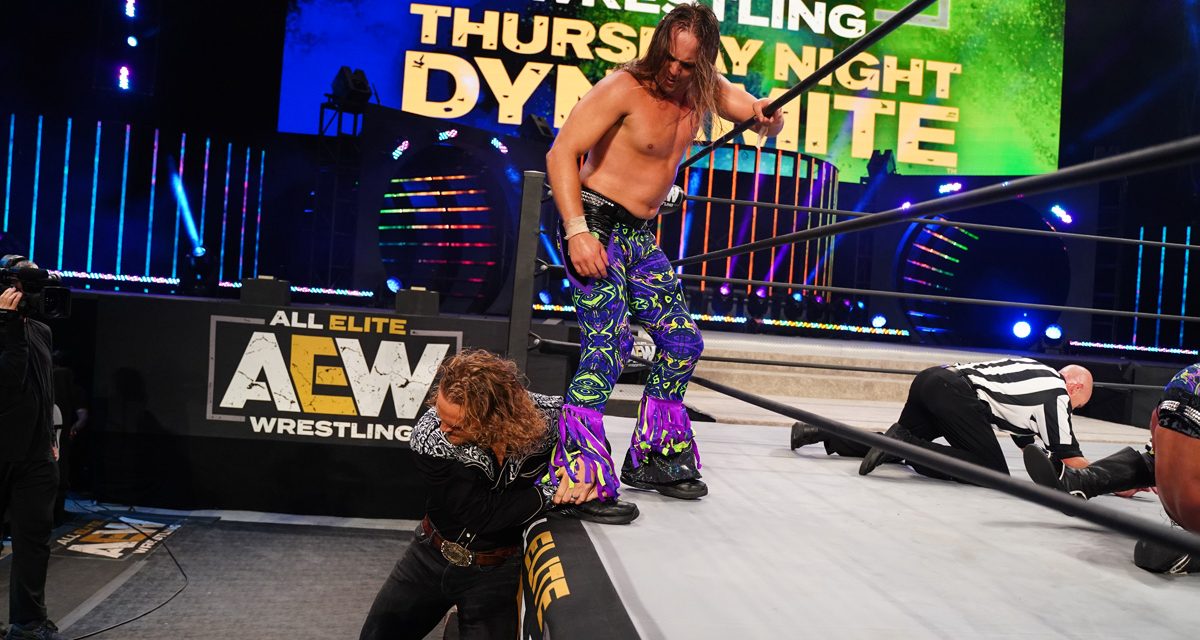 Live crowds for wrestling shows are a thing again. Sort of. AEW Dynamite has admitted people to Daily’s Place, albeit at only 10 percent of capacity, with social distancing enforced and masks “recommended” (and most people do appear to be wearing them). It’s at least a partial sign of normalcy in a year that, out of necessity, hasn’t had much of it. Let’s see if it provides a different feel as we head to TNT on a special night.

Making a strong rebound from getting his white jacket ruined, the Demo God, Chris Jericho, makes his way out to join the commentary team. And with those fans in the house tonight, people singing along to his entrance music is a thing again.

Match 1 – The Young Bucks vs. The Natural Nightmares vs. Best Friends vs. FTR – Gauntlet Match

It’s history, folks! The first ever Gauntlet Match in AEW history will decide the number one contenders for the AEW tag team titles. Jericho drops a gem by calling a Canadian Destroyer a Texas Destroyer, reasoning that the person performing it had never been near Canada (alas, untrue). QT Marshall has praise heaped on him by all three announcers, but it doesn’t protect him from being pinned by a BTE Trigger. Interestingly, after the Best Friends enter the fray, the “real” crowd is arguably not as energetic as the wrestlers-as-fans have been, despite two of the more over teams in the promotion facing off. The Bucks look well on their way to continuing on, but Hangman Adam Page holds Matt Jackson’s foot in place and costs his supposed teammates a pinfall. Page’s faraway look is the closest to regret we’ve ever seen from him. Kind of felt like a Kenny Omega heel turn was being teased, but maybe it’s Page who is turning instead. Or perhaps both, and they’ll just go their separate ways into different subplots. Naturally, FTR win and will challenge for the straps at All Out, setting up a conflict of interest for Hangman. Maybe. It’ll be fun to see where this ends up going.

Maluta is making his AEW debut, and welp, he’s in tough here. Archer reminds us of how vicious and how dominant he is, and that’s only half joking since he hasn’t been in the ring on Dynamite in a while.

After a commercial break, Archer and Roberts are still in the ring. They deliver a warning to the other contestants in the upcoming Casino Battle Royal. Roberts is interrupted by Team Taz for a rare heel vs. heel showdown. If Ricky Starks and Brian Cage aren’t enough of a combustible mix, Darby Allin skateboards to the ring and kicks Starks right out of his shoes. Every word of what I just typed is true. Starks and Allin scrap to the back while the two larger men simply posture at each other.

To the back we go, where MJF is grumpier than usual. He is in pain, after all.

A video package hypes the women’s title match between Hikaru Shida and Thunder Rosa, which may actually be necessary since a lot of fans probably aren’t as familiar with Rosa. We get to hear from NWA President Billy Corgan too, so that’s something. 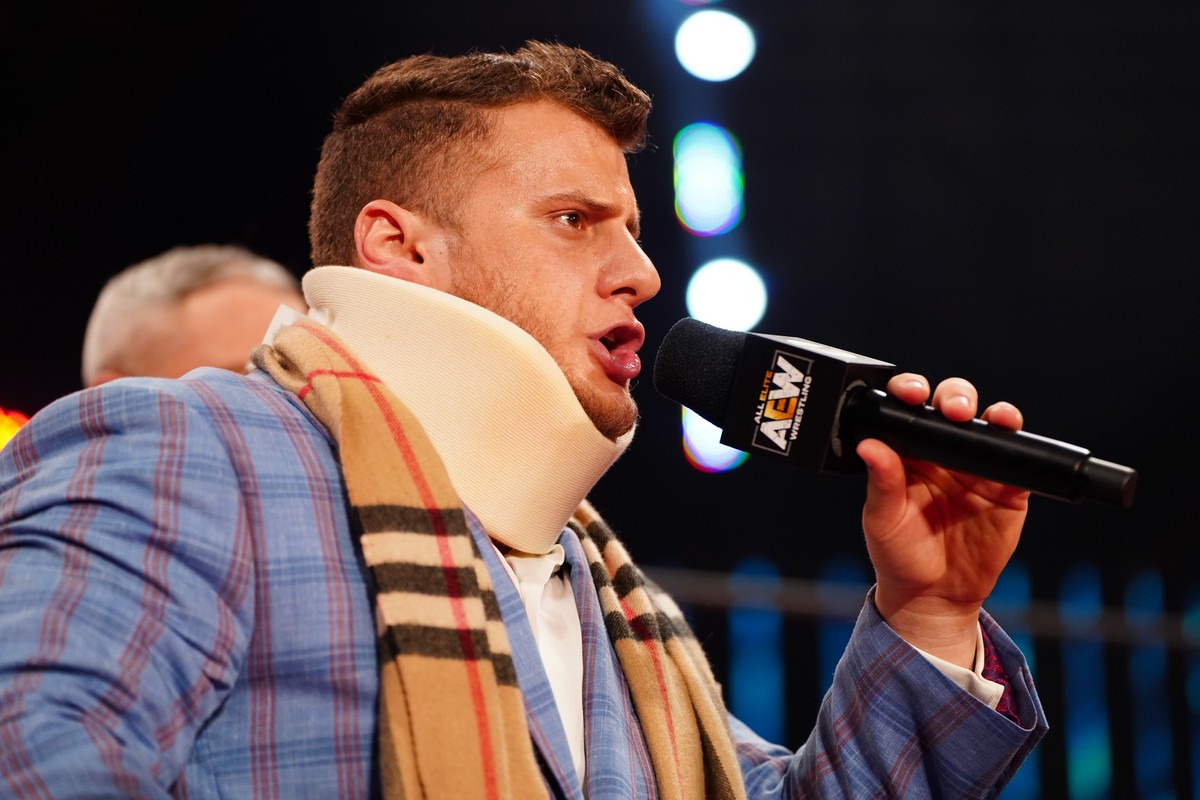 The PWI 500 just came out and had Jon Moxley listed as the No. 1 wrestler in the world. That’s relevant because he and MJF are headed to the ring for their contract signing (Chris Jericho is No. 3, for what it’s worth). MJF admits he thought Mox was a one-trick pony who was simply crazy, and would not want to be in a dark alley with him. But on Sept. 5, they won’t be in an alley, they’ll be in a ring, and he’s a pro wrestling prodigy. MJF cuts a long and compelling promo reasoning that he’s a better wrestler than Moxley, but it’s mostly some mind games to convince the champ to sign the contract that secures the match but bans the Paradigm Shift — and tries to get under Moxley’s skin by saying “tell your hot little wife I’m single.” It appears in the short term that Moxley takes the bait as he signs the contract, which sends MJF’s lawyer into hysterical laughter. He’s slightly less jovial when Moxley reveals he has added something to page 17 of the contract: He gets to wrestle the lawyer next week, the Paradigm Shift is legal, and if he doesn’t show up for the bout, MJF forfeits his title opportunity. Well played, Mox. Well played.

Santana and Ortiz aren’t exactly going to apologize to Best Friends for wrecking Trent’s mom’s van. Not that I thought he would.

Eddie Kingston addresses the rumors that he has formed a stable with these two tag teams by telling everyone to grow up. He’s simply leading some old friends to championships. A win here is a first step, I suppose. 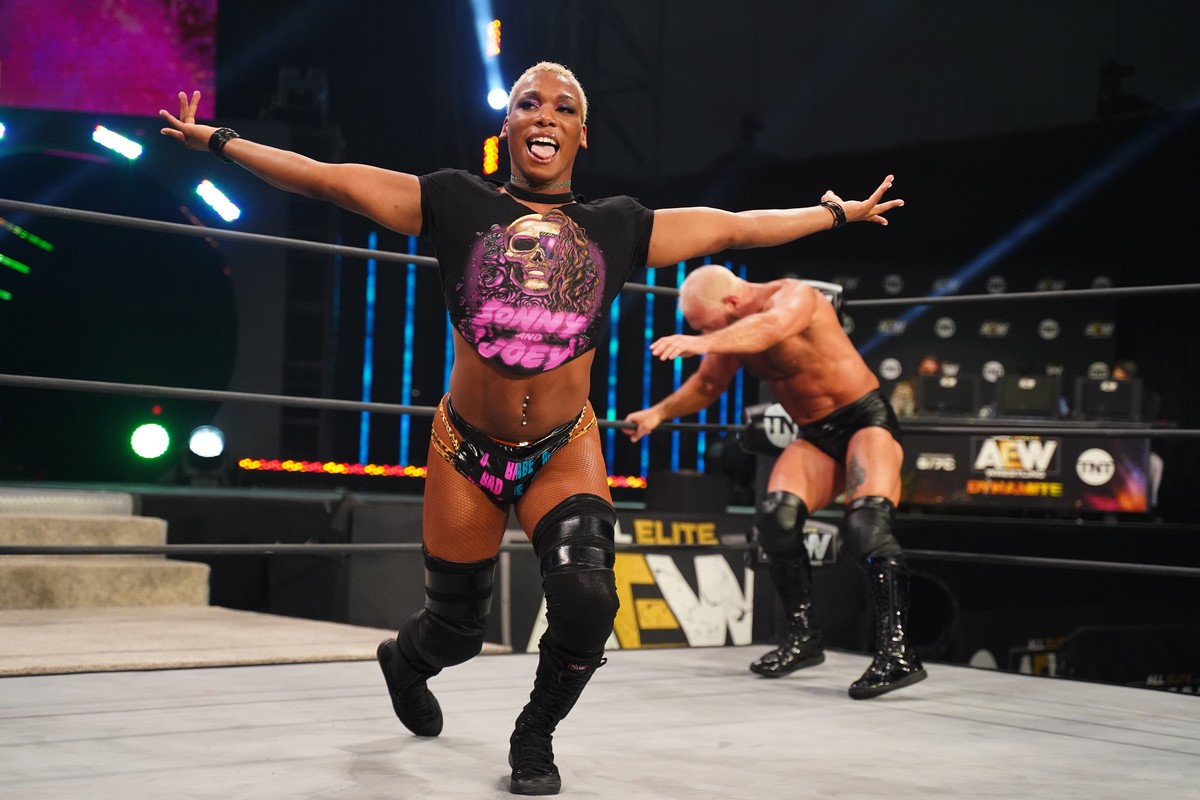 Sonny Kiss takes a moment away from the action to show off.

Footage from last week replays Mr. Brodie Lee defeating Cody for the TNT Championship and brutalizing him after he was carried out on a stretcher, which makes Jericho suspicious of whether or not Cody’s career may be over. On cue, the Dark Order comes out, carrying a coffin with them. It’s a symbol of the end of the Nightmare Family, even though it’s 10 in the coffin, not Cody. It’s all part of an elaborate introduction for Lee, who makes it clear that he is ending the open challenges and that Cody will never get the title back. He goes on to reveal Anna Jay as the newest official member of the Dark Order, but when he says no one can stand against him, Dustin Rhodes and QT Marshall try to lodge a formal complaint with their fists. It goes poorly. Scorpio Sky does better, nearly clearly the ring until Anna Jay distracts him for an ambush. As Lee and some of his associates withdraw, Matt Cardona comes out and lays into everyone in sight. Kind of a ragtag alliance against the Dark Order, but rebellions are built on hope. Heard that in a Star Wars movie once.

Back at the bar, of course, Hangman Page is drowning his sorrows when his interview is crashed before it can begin by the Young Bucks.

Feeling confident about the odds in this handicap match, Dr. Britt Baker declares that if Swole wins, she can have a one on one match against the good doctor any time she wants. If you think this might backfire … well then you’ve watched professional wrestling before. 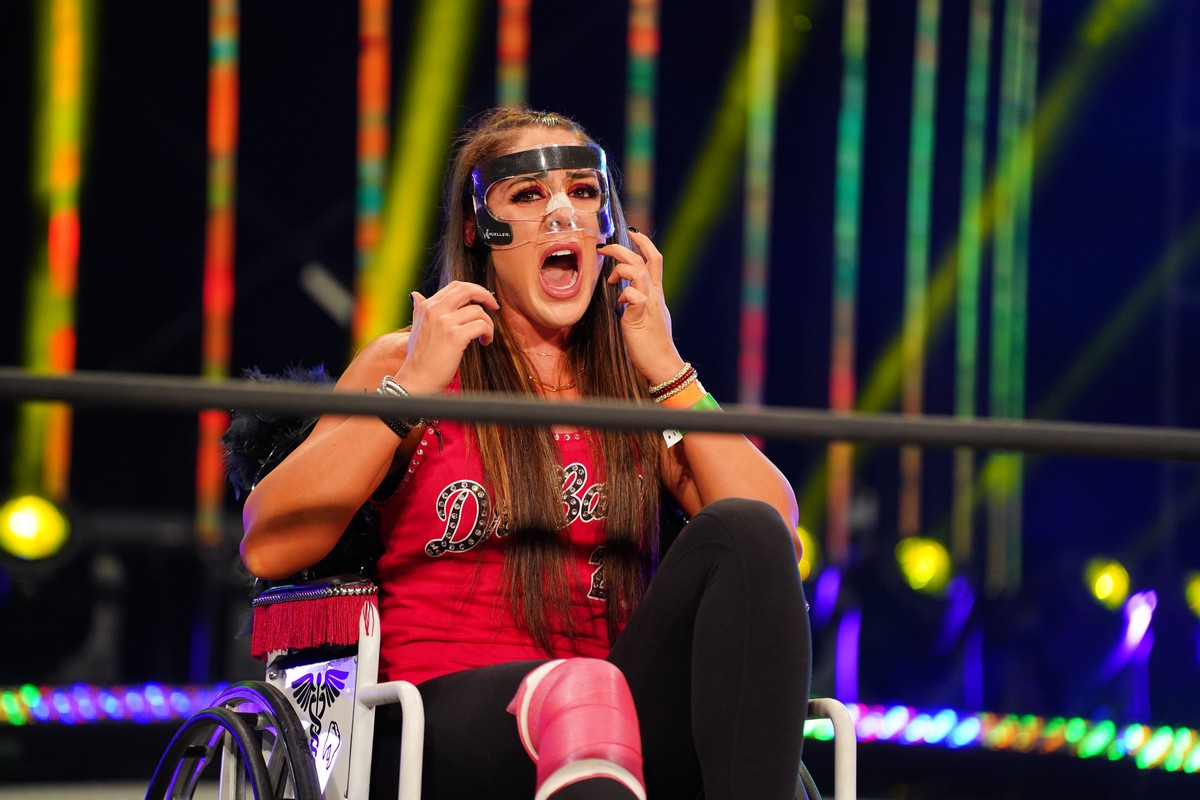 There are still some wrestlers at ringside, which means they can be the targets of recruiting pitches by the Dark Order. Tay Conti , you now have a decision to make.

Jericho points out that this is Hardy’s first time in front of a live AEW audience, which is true, but come on Demo God — it’s not like a he’s a rookie or something. Guevara is busted open and bleeding nearly as much as Hardy did earlier in this feud. It’s a nasty looking gash when the cameras get up close, but Sammy perseveres and wins with a suplex through a table. 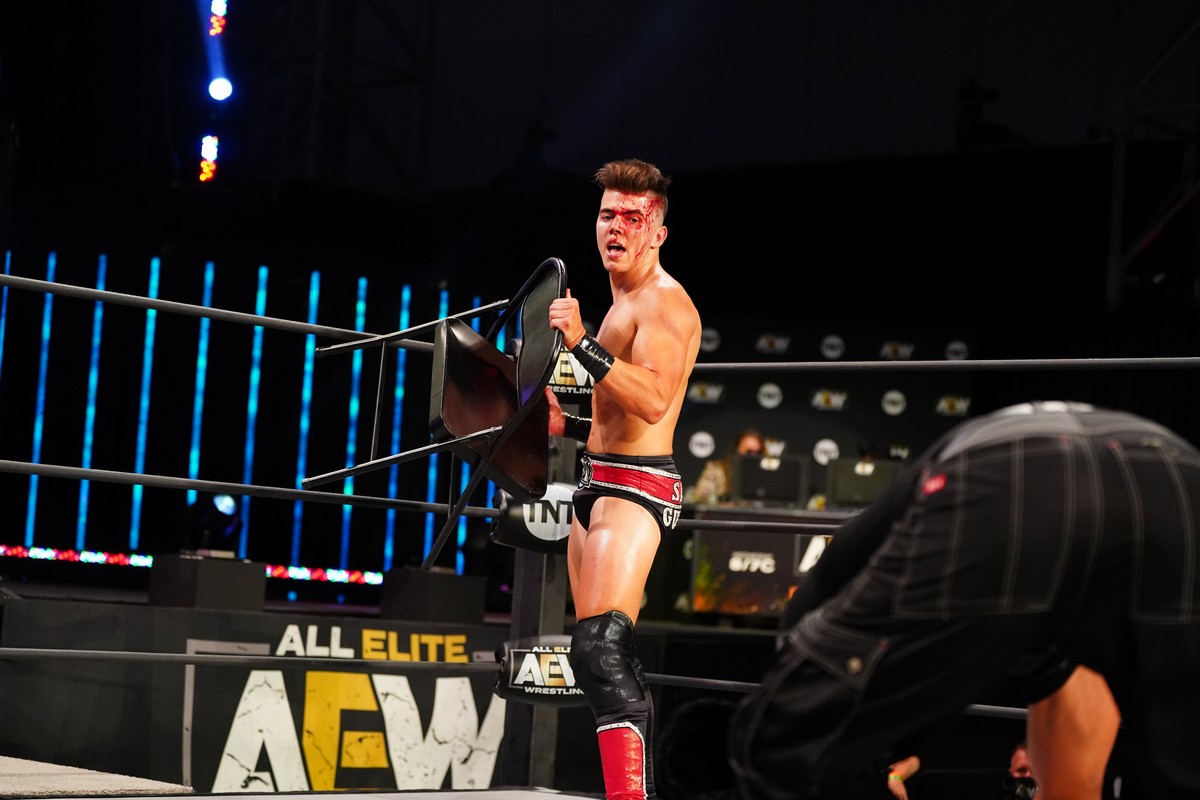 As Guevara (literally) licks his wounds, Orange Cassidy’s music hits and Freshly Squeezed appears from out of nowhere to attack Jericho. Every ref on the roster looks like they are out there, but it’s not enough, and the scrap continues as the show goes off the air. Dynamite is back on Wednesday next week, so see you in six.

Some good stuff tonight and a number of intriguing plot threads, but not AEW’s finest moment in terms of in-ring action. That happens sometimes. The live crowd didn’t make as much of a difference as one might have expected, perhaps because it was so much smaller than it would be under other circumstances. Still, All Out is shaping up nicely, and it’s not far off.