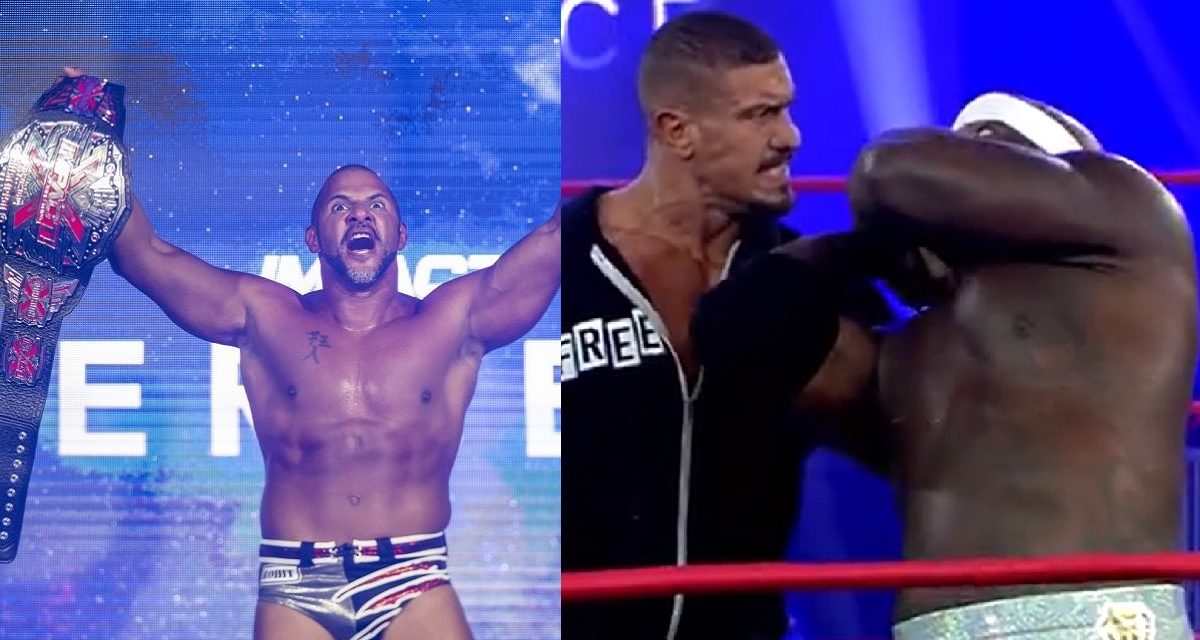 It’s too bad that Impact isn’t always part of the dialogue among wrestling fans. Because episodes like Tuesday night’s “Emergence – Week One” – which was chock full of solid matches top to bottom -demonstrate how good their product can be.

The show started off with a video package spotlighting the night’s big matches. Nice touch as it made the show feel a little more special than a normal episode.

This one was a TJP highlight reel, as he showcased a number of big moments throughout the match. In a couple of cool moments, he had a submission locked on one opponent, but he would also find a way to fight the other one – including putting on simultaneous submission holds at one point. The story here was that TJP had to fight off both guys, since Raju had committed to Bey that he would simply be there to assist Bey in retaining the title. Unfortunately, commentators Josh Matthews and Madison Rayne kind of spoiled the story by speculating that he would break his word to win the title if circumstances permitted. And they did. And he did. The end came when Bey was tied up in the Tree of Woe and TJP was down in the middle of the ring. Raju scaled the ropes but instead of going for an aerial assault on TJP, he took the low-hanging fruit instead, hitting a Stomp on Bey for the pin. This was a very good opener.

John E. Bravo and Crazzy Steve had a puppet show with some stuffed animals, but it got heated when Steve’s creepy monkey voiced its support for Kylie Rae in her match against Taya tonight. Meanwhile, Larry D put on his new cologne, Ring Rust, as he was still under Rosemary’s love spell.

In a video, the Good Brothers said that Ace Austin and Mad Man Fulton made a mistake by trying to get the Brothers’ attention. But now that they had it, they would pay for it.

Moose out-muscled Trey early on, throwing him around and trying to chop his way right through Trey’s chest. Moose impressed by seating Trey on the top turnbuckle, then hitting a standing dropick that knocked Trey to the floor. Moose continued the punishment outside the ring, and even moreso inside the ring, including heaving Trey halfway across the ring and hard onto the mat a few times. After an extended punishment, Trey tried to fight back with some flippy-doo offense, but to little avail. A Spear mercifully brought this one to a close. This was pretty much a squash match, but it was still entertaining. Trey earned his frequent flyer miles tonight with some of the crazy bumps he took. And Moose is great as the obnoxious monster heel. EC3 finally making his presence known physically should lead to a good feud.

After the match, EC3 attacked Moose from behind and dropped him with a Reverse DDT. He stole the championship and left the building.

Backstage, Reno Scum gave Hernandez the money they stole from Rhino. He gave them their cut, and afterwards, he said he may use their services again in the future.

A video package for Eric Young aired. In it, he recapped his TNA/Impact career history and the many personalities he’s displayed. He said that his recent mean streak is him in his purest form. He vowed to do whatever he wants to get what he wants.

The Flashback moment of the week was Eric Young beating Kurt Angle in a Gurney Match from 2015.

Backstage, Jimmy Jacobs interviewed Willie Mack about Eric Young’s actions against him and his best friend Rich Swann. An upset Willie started to reply, but the camera got hijacked by Brian Myers who insisted that Jacobs interview him instead. Myers whined about his lackluster career, and took a swipe at Vince McMahon, saying that it disgusted him that major decisions in this industry are being made by “an out of touch 70-year old man in some goofy production meeting.” He said he was taking his career and this business into his hands. Where he’ll probably drop the ball. Okay, he didn’t say that last part. As he finished, Willie Mack attacked him and they brawled briefly before snapping to a commercial.

A promotional video for Heath aired, complete with cheesy graphics and backgrounds. These segments are great. #Heath4IMPACT

"Joe Biden, you wanna pick your running mate on a Tuesday. Man nothing happens on Tuesday but IMPACT Wrestling. And what should have been trending was #Heath4IMPACT!" #Emergence #IMPACTonAXSTV @HEATHXXII pic.twitter.com/WGeDjIorVK

Josh Matthews spoke a mile a minute during the introductions. Wow, it was like they’re paying him by the word. Ace Austin took a beating for a while, but when Fulton came in, it was Karl Anderson who was on the wrong end of the beating. Finally came the confrontation between Gallows and Fulton, the big hosses of the teams. Every time Austin came in, the Brothers were able to turn things around. Austin and Fulton were surprisingly dominant for much of the match, even without taking dirty tactics. Anderson was in jeopardy for a while, but finally was able to tag in Gallows who stormed over both opponents. In the end, Gallows got the best of Fulton on the floor, and after taking him out of the equation, it was a simple matter of putting Austin down with the Magic Killer for the pin. This was really good. The Good Brothers really let Austin and Fulton shine. Before this match, it would have been easy to imagine this would have been a squash. But the match was competitive, and even though there was little doubt who would win, Austin and Fulton looked strong. It’s good to see them using Fulton this way, as he has the potential to be a huge star.

Alisha, Rosemary, and the Deaners were drinking, when tragedy struck – somebody stole their beer. Dun dun dun! They suspected it was Acey Romero, but he denied it. Susie then reminded the Deaners and XXXL of their truce before things could get too heated. Larry D started to flirt with Rosemary, but she brushed him off when John E. Bravo entered. Bravo was jealous, but didn’t do anything. Susie and Jake, after their disastrous date last week, were cool to one another.

Kylie tried to display some sportsmanship, but Taya wasn’t having it. Kylie was doing very well and had things in control, when Rosemary, who was reffing the match, tripped her up. Taya took advantage, even going so far as to bite Kylie, while Rosemary looked the other way. Kylie nearly got a win with a headkick out of nowhere, but Taya kicked out. Taya nearly won after a high back suplex, but Kylie wouldn’t give up. A deke by Kylie nearly sent Taya crashing into Rosemary, but Taya was able to stop in time. But as she turned around, Kylie clobbered her with a kick for the pin. This was actually a decent match by Wrestle House standards.

After the match, Rosemary told Larry D she’d see him next week. John E. Bravo was visibly disappointed. Meanwhile, the Deaners were still on the search for their stolen beer.

Match 4: The North vs. the Motor City Machine Guns (c) – for the Impact Tag Team Championship

As expected, this one started off as a battle between quickness and power. This one pretty much became a Texas Tornado match, as the referee allowed a ton of double-teaming throughout. The North used some dirty tactics to slow things down and keep Shelley stuck in their corner. After an awkward moment where it looked like Shelley may have been legitimately knocked silly, he was able to get the tag to Sabin. The Guns then took over and nearly got the win after an assisted elevated stomp to the back of Page’s head.  A neat sequence saw an exchange of rollup attempts that looked like it would end the match, but nobody would stay down for three. Things picked up in the end with the Guns hitting a flurry of offense, finally putting Page down with a Neckbreaker Splash combo to get the win and retain the titles. This was really good. The North have to be in the running for tag team of the year, and the Guns haven’t lost a step since their first run in the company. A best-of series between these two would be a great way to take us into the fall. 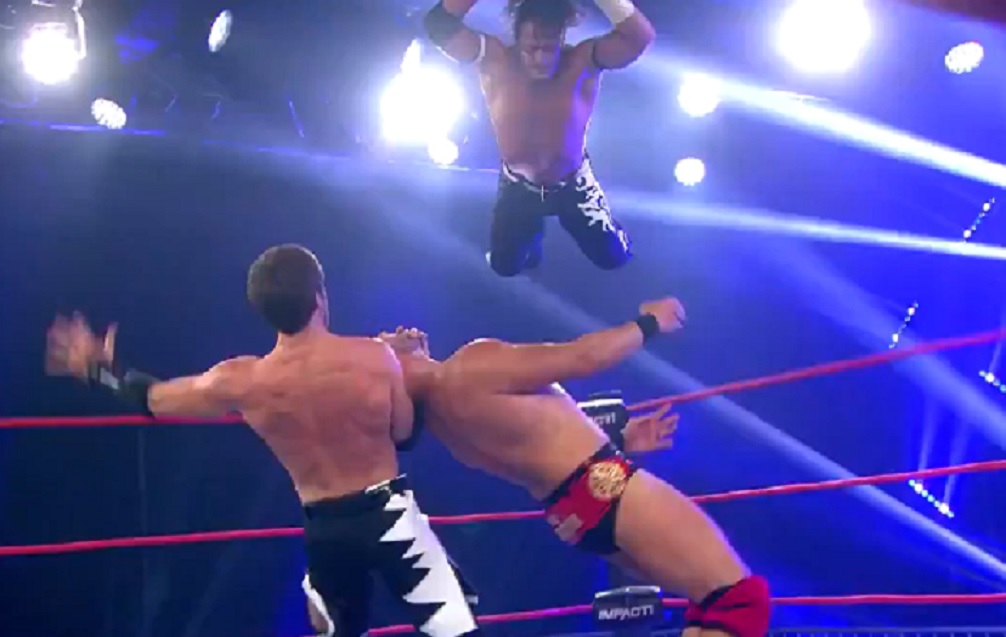 The show ended with the Guns celebrating their win.

A highlight of Impact’s summer, the first night of Emergence was packed with strong in-ring action from beginning to end. Hopefully night two next week will follow suit.