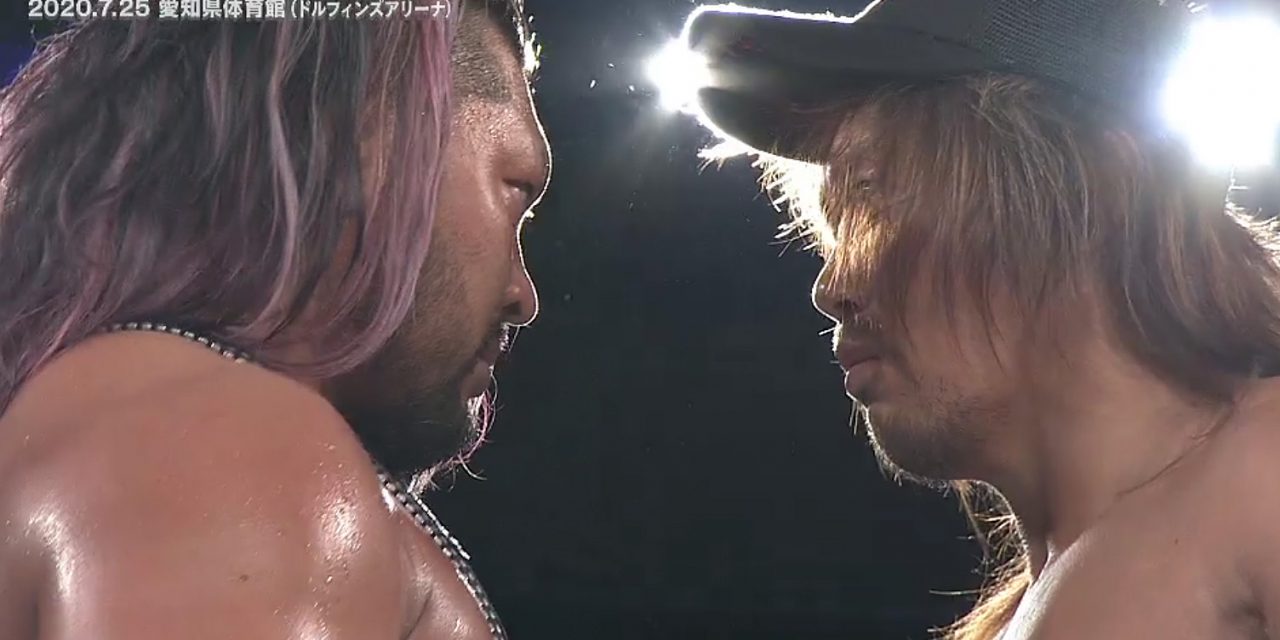 Whatever they are paying Dick Togo, the spoiler is proving to be a valuable addition to Bullet Club. He once again came to Evil’s aid keeping both the IWGP Heavyweight and IWGP Intercontinental Championships in the Bullet Club camp at NJPW Sengoku Lord.

Dressed in a white suit and a black beret, Dick Togo accompanies Evil to the ring. Evil smirks at Hiromu from across the ring. Hiromu starts the match off by walloping Evil with a shotgun drop kick and two running clotheslines. Evil bails for the safety of the floor. 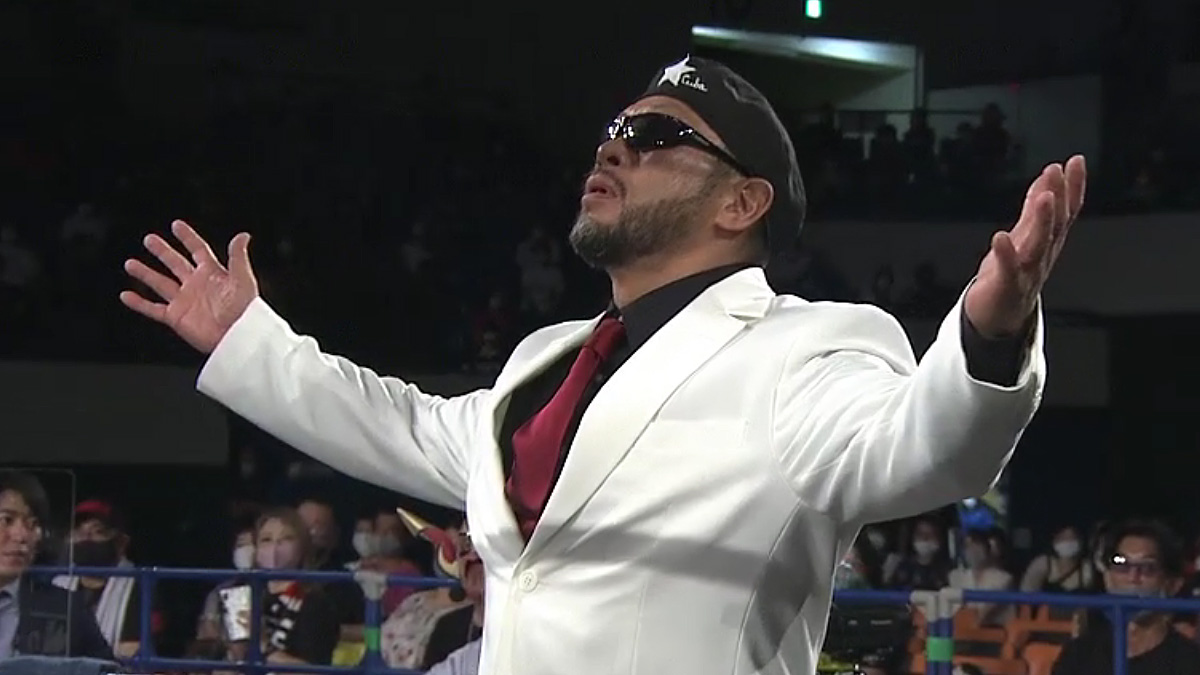 Hiromu shotgun drop kicks Evil from the apron twice. The second time has Evil flying right through the door in the barricade. Togo saunters over. Red Shoes steps between Hiromu and Togo. Seconds later, Togo grabs at Hiromu as he bounces off the ropes inside the ring. Togo throws up his hands. Evil hurls Hiromu through the ropes. Evil distracts Red Shoes so that Togo can put the boots to him on the floor. Togo throws up his hands once again.

Hiromu takes the Evil Con-chairto. He falls to the ground holding his throat and neck.

Hiromu climbs to the top rope. Evil pulls Young Lions in the way. Hiromu does a moonsault anyway. With Red Shoes wiped out, Hiromu nails Evil with a running Death Valley driver into the turnbuckles and a Time Bomb 2. Evil kicks out shocking Hiromu and the crowd. Hiromu hits his Time Bomb finisher. It looks like Hiromu has the match won. Dick Togo plays spoiler as per his nickname once again by pulling Red Shoes out the ring. Togo snatches his garrote from under the ring. He chokes out Hiromu. Darkness Falls and Everything is Evil pins Hiromu.

Taji Ishimori attacked Hiromu after the match giving him a Bloody Cross and rubbing the IWGP Junior Heavyweight Championship in his face. Ishimori was going to hit him in the head with the belt but Naito came running out. Ishimori scuttled away while Naito confronted Evil face to face.

In the other championship match of the evening, Shingo Takagi sought to not only defeat challenger El Desperado but to reclaim the Never Openweight title from him. Desperado stole the title in an attack at New Japan Road.

An arrogant Desperado comes to the ring with the stolen Never Openweight belt around his neck. Shingo complains bitterly to Red Shoes who admonishes Desperado. Desperado swings at Shingo with the belt. Shingo ducks, retrieves the belt from where it flew outside the ring and threatens to belt Desperado with…well…the belt. Red Shoes convinces him not to do so.

Desperado tries to flee the ring. Shingo grabs him by the back of his trunks hauling him back in for a barrage of chops and haymaker punches in a corner. Desperado splits to the floor. Shingo bounces his head off the ring apron and the security railing. The crowd voices their approval cheering for more. 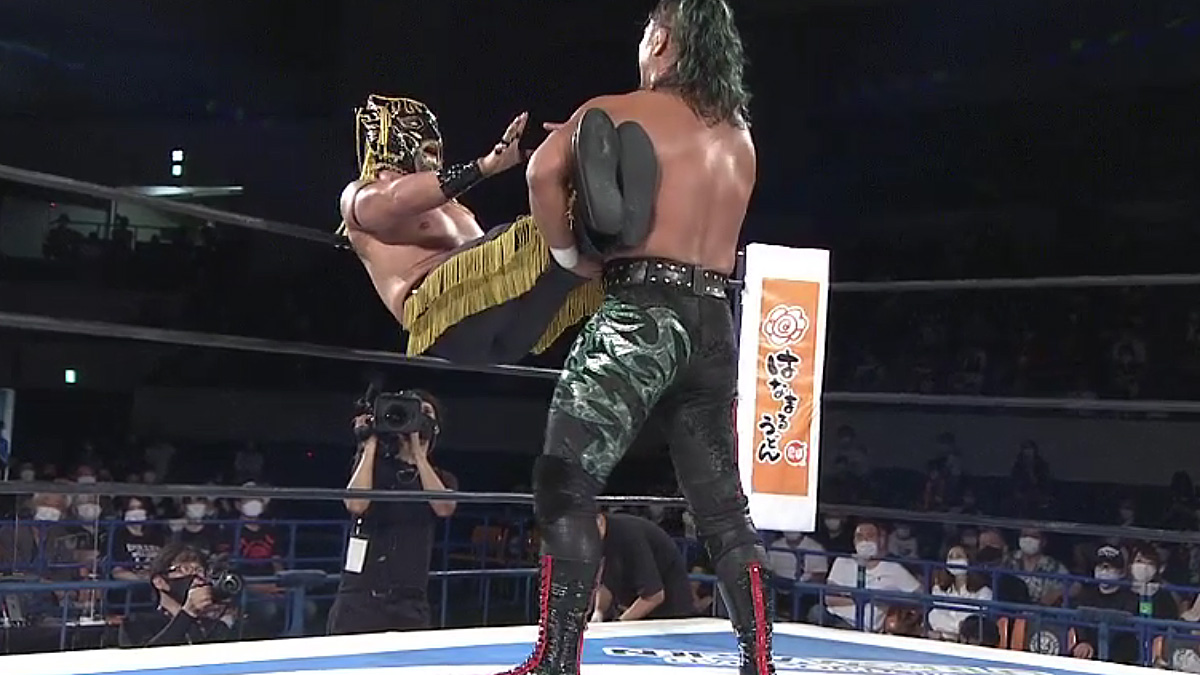 Desperado reverses an Irish Whip in the barrier. Shingo shrugs the attack off but Desperado pulls him into the steel post by his trunks. Shingo staggers back into a barrier. Desperado drop kicks Shingo’s knee into the barrier and hits the knee with a steel chair. A knee breaker back inside the ring has Shingo on the defensive.

Desperado wraps Shingo’s leg around the ropes bending that knee in a direction it is not supposed to bend. Desperado then stands on Shingo’s knee, gives it a dragon screw leg whip and a single leg crab of sorts. Shingo reaches the ropes to end the hold.

A head butt and clothesline ends Desperado’s momentum. Shingo gives Desperado a super dragon screw leg whip by positioning him in the ropes.

Desperado gets desperate. He hits Shingo into the head with the belt. Shingo retains by knocking Desperado head over heels into the air with a Pumping Bomber and Last of the Dragon.

Ibushi pins Douki with a Kamigoye.

Takahashi submits to the Cobra Clutch after taking a Tombstone Piledriver.