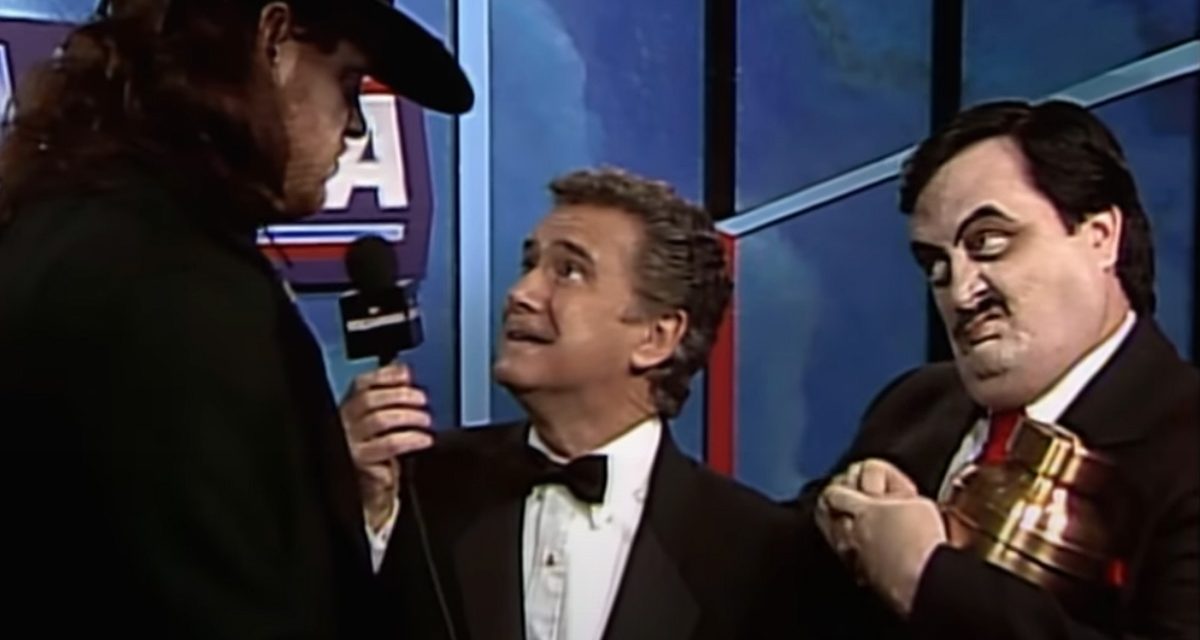 The pro wrestling world is paying tribute to television icon Regis Philbin who passed away today at the age of 88.

While he is best known for hosting Live! with Regis and Kathie Lee and Who Wants to Be a Millionaire, Million Dollar Password and the first season of America’s Got Talent, Regis Philbin also contributed to the world of pro wrestling. Regis confessed numerous times that he had been a wrestling fan his entire life.

On Live! with Regis and Kathie Lee he hosted many wrestlers including The Undertaker, Yokozuna, Diesel, Shawn Michaels and a host of others.

Philbin was an on-air guest at WrestleMania VII and even assisted with the play-by-play of the main event match between Hulk Hogan and Sgt. Slaughter for the WWE World Heavyweight Championship. He also interviewed The Undertaker at the event backstage…

He would return years later to congratulate the WWE for its 1,000 episode of Raw.

The WWE itself issued a statement saying:

WWE is saddened to learn that legendary entertainment figure Regis Philbin has passed away at age 88.

The TV icon was also a memorable presence at WrestleMania VII where he conducted backstage interviews and provided commentary for the main event showdown between WWE Champion Sgt. Slaughter and Hulk Hogan. Regis also appeared on the historic Raw 1000, sending a classy congratulatory message to WWE.

WWE extends its condolences to Philbin’s family, friends and fans.

Members of the industry remembered Philbin today with messages of praise and condolences.

CAC sends out our sincerest condolences to the family friends and fans of the legendary Regis Philbin who passed away today. He was a huge promoter of professional wrestling throughout his career in television having countless wrestlers on his shows from the beginning. R.I.P. Sir pic.twitter.com/VJVA7ayhWr

RIP Regis Philbin. A gentleman that was the epitome of an entertainer. A national treasure. He always treated guests from the Pro Wrestling industry with dignity and class. Godspeed sir. pic.twitter.com/RtdWSYpLqg

My heart is broken. RIP Regis. You were one of the reasons I wanted to be on television. Your legacy will live on forever. ❤️

Regis Philbin was friends with Freddie Blassie ever since he had him on his radio show.
1. Freddie giving Regis the “World’s Brass Knucks Championship” on the Joey Bishop Show.
2. Regis, his daughter, Freddie & Moms Mabley. pic.twitter.com/mz1A8F1zjx

I will always remember how much respect Regis Philbin showed to the wrestling world. I grew up watching Regis and Kathy Lee because that was my mom’s favorite show. Rest peacefully, Regis❤️ pic.twitter.com/nhRyK1E8as