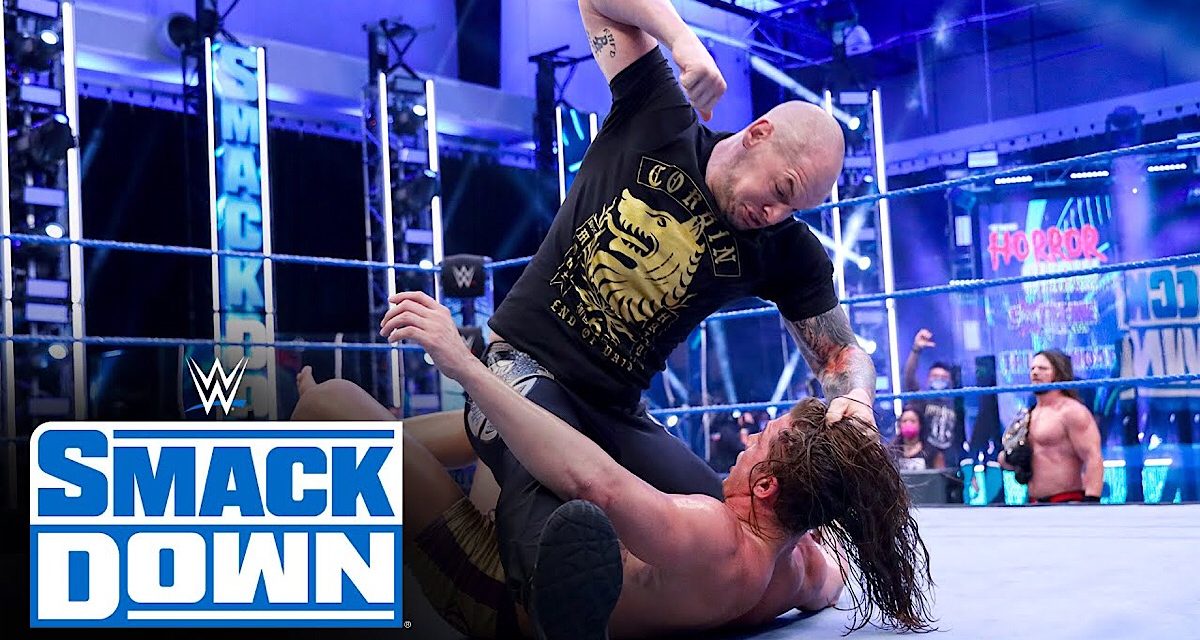 Riddle vs Styles belongs on any pay-per-view lineup, but tonight it headlined Friday Night Smackdown. Matt Riddle’s sudden shot at gold made rival King Corbin’s interference seem inevitable. However, the tagline “Anything can happen in the WWE” is gloated once again.

As WWE prepares for Extreme Rules on Sunday, these two hours were simply mild. As usual on Smackdown, everything is either hit or miss. And in this case, the blue brand showcased a hundrum of a go-home show.

Big E starts hot with a closeline and sends Cesaro to the floor. The former attempts a corner shoulder tackle but runs into the post, giving Cesaro the short-lived upper hand. Big E catches his opponent with multiple overheads and follows with two big splashes before commercial. 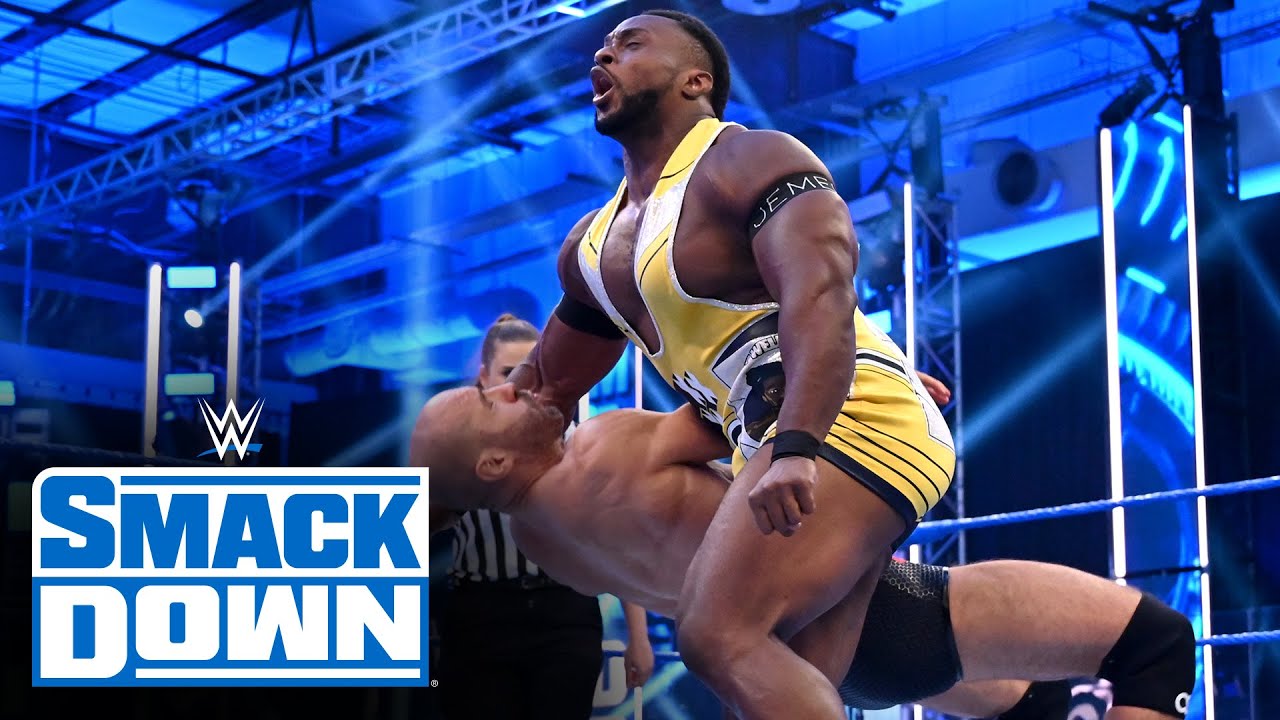 Big E rushes in for a spear but is countered by Cesaro. The latter follows with a picture-perfect springboard uppercut for a two-count. Big E places a Stretch Muffler submission hold on Cesaro before “The Swiss Superman” counters with a giant swing and Sharpshooter. He transitions into a crossface while Nakamura attacks Kingston ringside. Big E is distracted giving Cesaro the opportunity to hit the Neutralizer.

Nakamura and Cesaro pull out a table before Kingston dives onto them. Cesaro escapes The New Day before any further damage is done.

King Corbin is interviewed backstage regarding his heat with Matt Riddle. Corbin, like many others, mentions Riddle’s lack of footwear and calls him “a little boy.” If Corbin’s interference in this upcoming Intercontinental Championship match wasn’t already foreseen, it definitely is now.

Nakamura and Cesaro are forced into strictly scripted promo where they reveal their chosen stipulation: a tables match. Not a huge surprise.

A Moment of Bliss

Alexa Bliss and Nikki Cross start by honoring the fifth-year anniversary of the Women’s Evolution “where boundaries were broken (and) glass ceilings were shattered.” Has there ever been a more contrived angle than the Women’s Evolution? Bliss then gives her predictions on the Wyatt Swamp Fight at Extreme Rules, Smackdown’s Intercontinental Championship match, the NBA Finals, and Cross’s title match at Extreme Rules. “A Moment of Bliss” is never just “a moment” with Bliss and Cross’s babbling.

The Women’s Tag Team Champions Bayley and Sasha Banks walk the ramp mentioning the Women’s Evolution, except these girls spill the truth. They declare being the “architects” of the evolution, subtly referencing their classic 2015 rivalry and initial tag team title reign. Bayley gives her input on Extreme Rules before Bliss reveals her “special guest”. 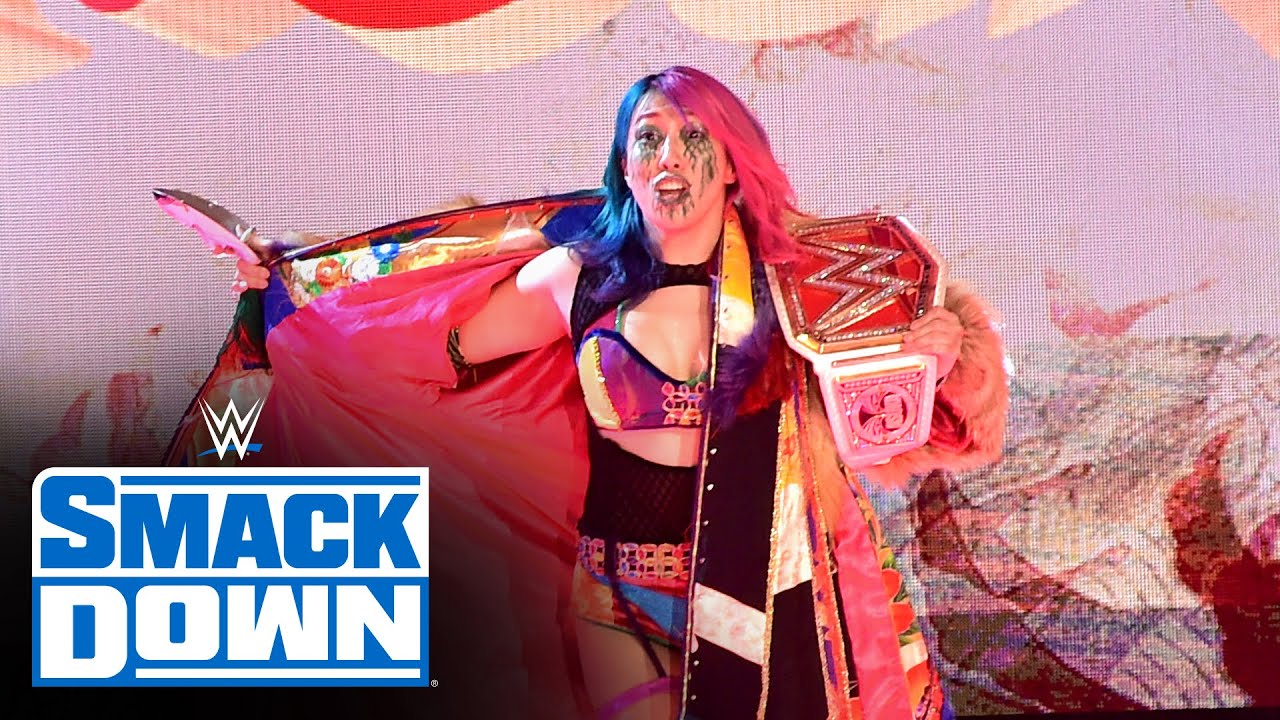 RAW Women’s Champion Asuka enters the fray, showing a complete disregard for WWE’s brand split. Bliss and Cross fend off an attack from Bayley and Banks before the break.

Asuka and Nikki Cross vs Bayley and Sasha Banks

Cross quickly tackles Bayley and continues the onslaught before the champ takes advantage of a distraction. Banks and Bayley make frequent tags while working down the scotswoman. Asuka finally gets the hot tag taking out both opponents. Before the break, the faces catch both Banks and Bayley inside the ring skirt followed by a dive off the apron.

Banks and Bayley have control on Asuka. The RAW wrestler delivers a knee to Bayley before Cross gets the hot tag on Banks. Cross misses a top-rope cross body before Bayley sends her to the outside. The former hits an assisted-ddt for a two-count. Asuka and Banks battle to the floor as Bayley gets a dirty pinfall for the win. Although she lost the match, Cross exceeded expectations while working an above-average, Smackdown tag team match.

The Miz tries to pep John Morrison for his bout against Braun Strowman. They make awkward horror movie references in preparation for Sunday’s “Horror Show”.

The usual Firefly Funhouse segment is interrupted by images of the swamp. “Bayou” Bray Wyatt appears in an actual swamp while giving his infamous blathers. Even though this version of Wyatt gave incomprehensible promos, seeing its one-of-a-kind delivery again was bittersweet. Wyatt describes his backstory with Strowman and declares his control over “The Monster”.

Strowman gives a passionate promo on Wyatt: “I have to go home and end him before he ends me!” This short promo has to be Strowman’s best since becoming champion

Strowman charges at Morrison and ragdolls him across the ring. The champion hits a brutal clothesline and a one-arm slam before cackling like a maniac. He gets in a lifting-triangle choke and delivers a running powerslam for the win. Strowman had a great showing — but this is extremely disappointing for Morrison. He’s brought a stretcher, but is ultimately carried out by Miz. 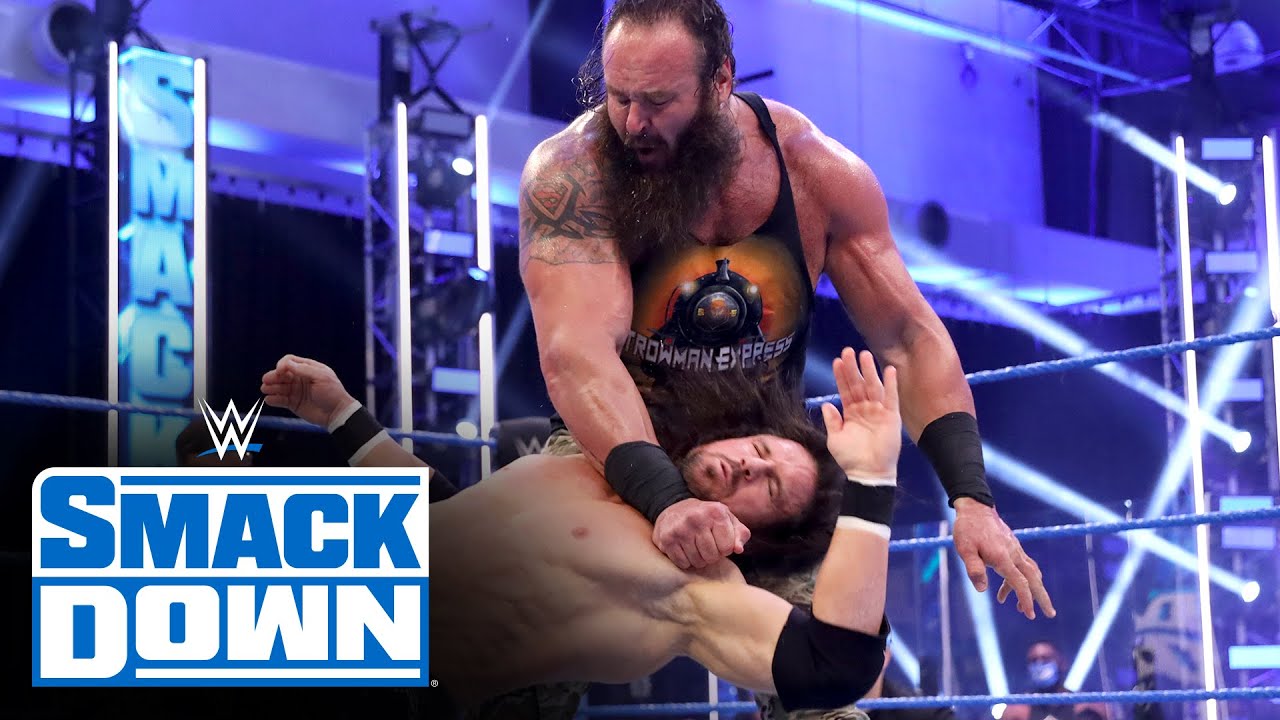 Naomi has early control before Evans delivers an elbow. The former gets her knees up on a moonsault and follows with a splits drop. She hits a hurricanrana, sending Evans to the apron. Evans wittily ties her opponent’s hair between the ropes before hitting the Woman’s Right for the victory. This match might need its own palette-cleanser. 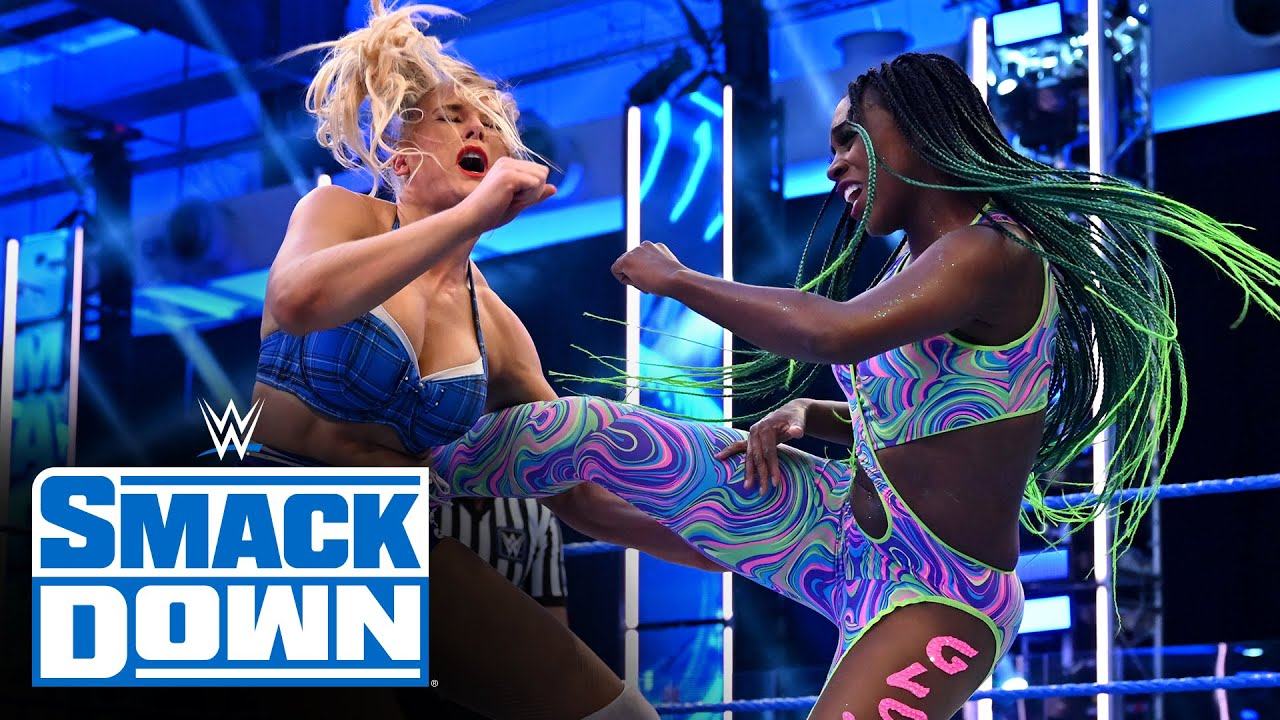 Jeff Hardy is interviewed backstage by Kayla Braxton. She asks him about his Bar Fight with Sheamus and his thoughts on tonight’s main event. But from behind, Sheamus takes out Hardy with a cheap shot.

Braxton interviews Sasha Banks and Bayley as they boast about their victory. The camera cuts to a shaken Nikki Cross. She hears the laughs of Bayley and Banks and attacks before Bliss pulls her off.

Matt Riddle vs AJ Styles (c) for the Intercontinental Championship

Riddle and Styles lock up — the first of the night! Riddle gutwrenches Styles to the floor and flusters the champion. Styles bangs on the announce desk, and Riddle mockingly does the same, followed by a high kick before the break.

Riddle has full control over Styles as he continues the forward pressure. The latter finally counters with a facebuster and dragon-screw while targeting the left leg. Riddle fights out of a choke and delivers a Broton and Bro-2-Sleep for a two-count. 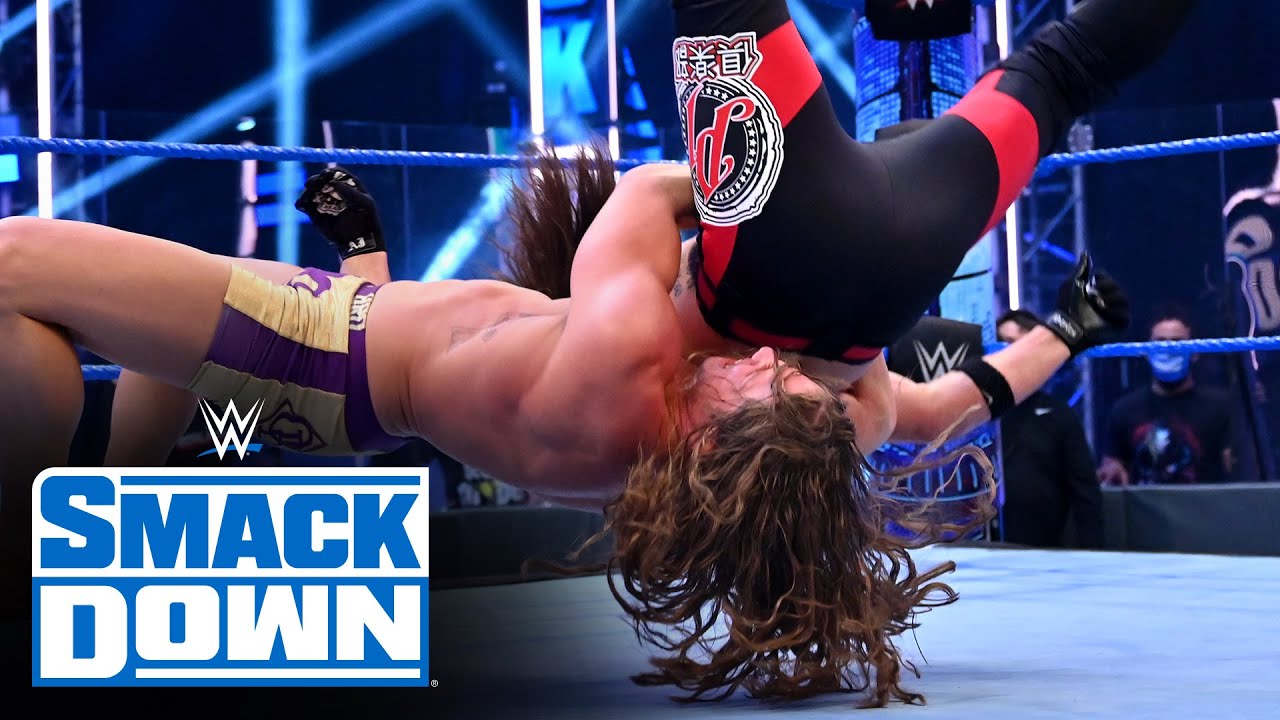 Back from commercial, Styles rushes forward with a closeline. They trade blows until Riddle delivers a quick German. He hits a ripcord-knee before missing a Floating Bro, leading him into a brainbuster. They trade reversals and strikes in a really smooth spot ending with the Calf Crusher. Riddle reverses into the Bro-mission, but Styles uses his momentum to pin the shoulders for a three-count.

Styles extends a hand before Riddle is attacked by Corbin from behind. Smackdown did what no one expected. They handed Riddle a clean loss without interference from Corbin. But of course, Corbin always gets his way.

A must-see main event flanked by a very forgettable Smackdown. Consider this the resting area on the road to Extreme Rules.