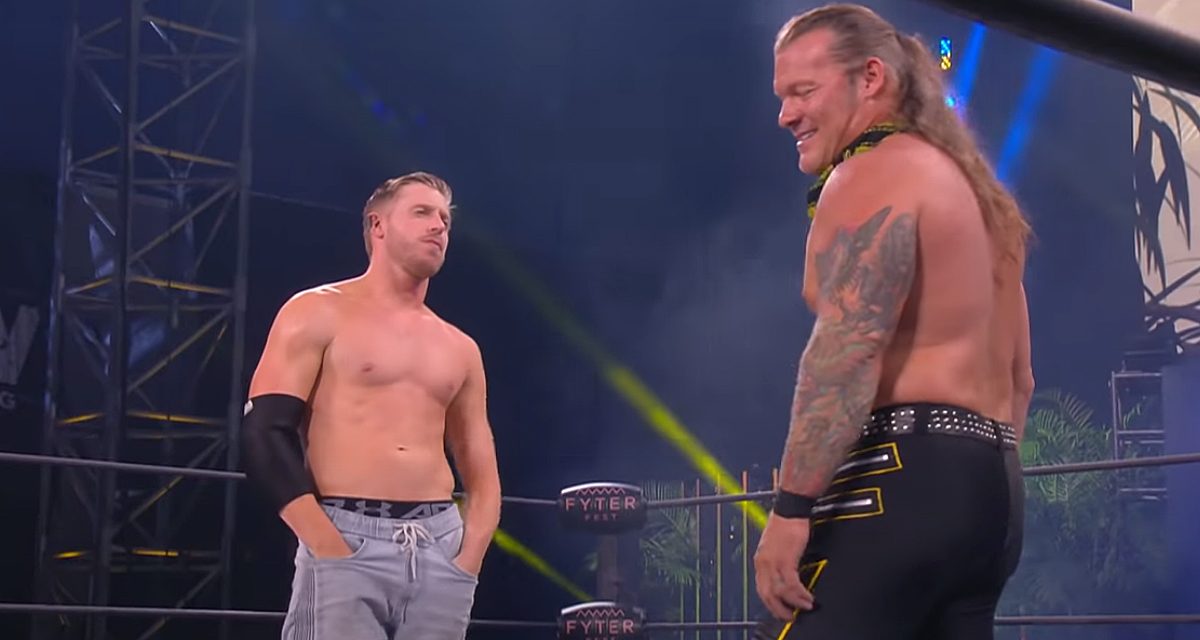 Let’s not waste any time. The second night of Fyter Fest is down a world title bout, but it’s gained a tag team championship match in its place. And it’s leading things off from a hot (probably in both senses) Daily’s Place in Jacksonville, so let’s get to TNT and see how it goes down.

This should be nonstop action from the opening bell, seeing as both teams have impressive spots as duos and as individuals. Matt Hardy is in the corner of the challengers for … reasons, I guess. It’s quite possible that we should be talking about Isiah Kassidy as one of the more underrated talents on the roster, so let’s do that. But not too long, because the champs wrap this one up fairly quickly. Good game, good effort Private Party.

Cody is going to be on Hot Ones doing battle with a foe even he may not be able to defeat, namely some very hot sauce.

Archer unceremoniously dumps Sonny Kiss into Janela’s arms to start things out, which is probably a pretty good indication of what’s going to happen after a valiant effort by the Bad Boy. The announcers talk up the fact that Archer still has only one loss on his AEW record, something we’re likely to hear about a lot until it changes. Janela (and Kiss) both give their all, but you know how this one is ending.

Darby Allin is still preparing for his in-ring return as only he can. This week, that means practicing his Coffin Drop from a ridiculous height into a foam it. Better you than me.

Speaking of better you than me, the guy who is set to wrestle Jon Moxley next week, Brian Cage, comes out to say a few things via his manager. Taz promises their upcoming collision will be an iconic moment, and he also busts out the FTW Championship from his ECW glory days. That’s a fun bit of history. Taz gives it to Cage, who … maybe hasn’t quite earned it yet? Well, maybe we’ll feel differently a week from now.

Match 3 – The Butcher, The Blade and Lucha Bros. vs. FTR and The Young Bucks

It’s frenemy time! Not so much for the heels, who seem to be completely aligned. But FTR and the Bucks have been rivals from the start, and the big questions is whether they can set that aside toward a common goal, even if it’s simply winning one match. It’s probably even harder to keep your team unity intact when there’s all kinds of craziness going on, but the two duos hold it together until a stray superkick strikes and costs them the match. Also, Rey Fenix does something I’ve never seen in any match ever, which isn’t something I type very often. Please go look up the highlights.

Winners: The Butcher, The Blade and Lucha Bros. by pinfall

Has Big Swole been suspended? I smell a certain doctor’s hand in this …

This is the part where I’d usually say a squash match has no place on a PPV card, but since Fyter Fest is on free TV, AEW gets to skate on a technicality. This is indeed a squash, but Nyla also has an announcement: She’s hired herself a manager. Nyla isn’t ready to tell us who it is, but does say they will guarantee that Rose leaves the AEW Women’s Champion from some show very soon.

Colt Cabana gets a clean bill of health, more or less, which means Mr. Brodie Lee expects him to be ready for their six-man tag match.

Incredibly, this is the first time all three members of SCU have been in a match together since Jan. 1. Their problem here is that they are outnumbered, with Evil Uno and more Dark Order goons standing menacingly on the ramp. Cabana sells the damage to his side that left him with a pretty nasty looking hematoma, but he soldiers on and is rewarded by getting the pinfall. Feels good to be winning, eh Colt? Seductively good, one might say. Keep one heart on your soul, Colt.

Even though she’s been banned from the arena, Swole managed to make her way inside and get close to Britt Baker. Hilarity ensues, unless you’re the doctor.

Cassidy sends his best pals to the back before the match ends, but Le Champion is certainly not above getting some help from his flunkies. The unbelievably live crowd adds to the back and forth nature of the action, so hats off once again to the wrestlers and other talent who have been standing in as audiences in the absence of fans. Cassidy actually delivers a superkick at the end of his usual shtick, catching everyone from Jericho to the announcers off guard. There’s a real question as to whether this is a “lose but still look good” moment for Cassidy or if he’s going to get a huge victory to add to his undeniable momentum. Some orange juice to the face from Santana and Ortiz and a madball shot/Codebreaker combo seem like doom for Freshly Squeezed, but he kicks out of that and evades a Lionsault. We’re rolling past 10 p.m. to get to the finish, which comes when Cassidy tries for a Superman punch and is nailed by the Judas Effect. No one kicks out of that, so this is indeed a “look good in a tough loss” deal. Still a lot of fun. See you in seven!

Though Fyter Fest Night 2 wasn’t as strong from top to bottom as the previous week, the chaotic multi-person tag matches and excellent main event helped it rise up to the same level. Maybe Mox was missed a little, but not as much as one may have thought ahead of time.