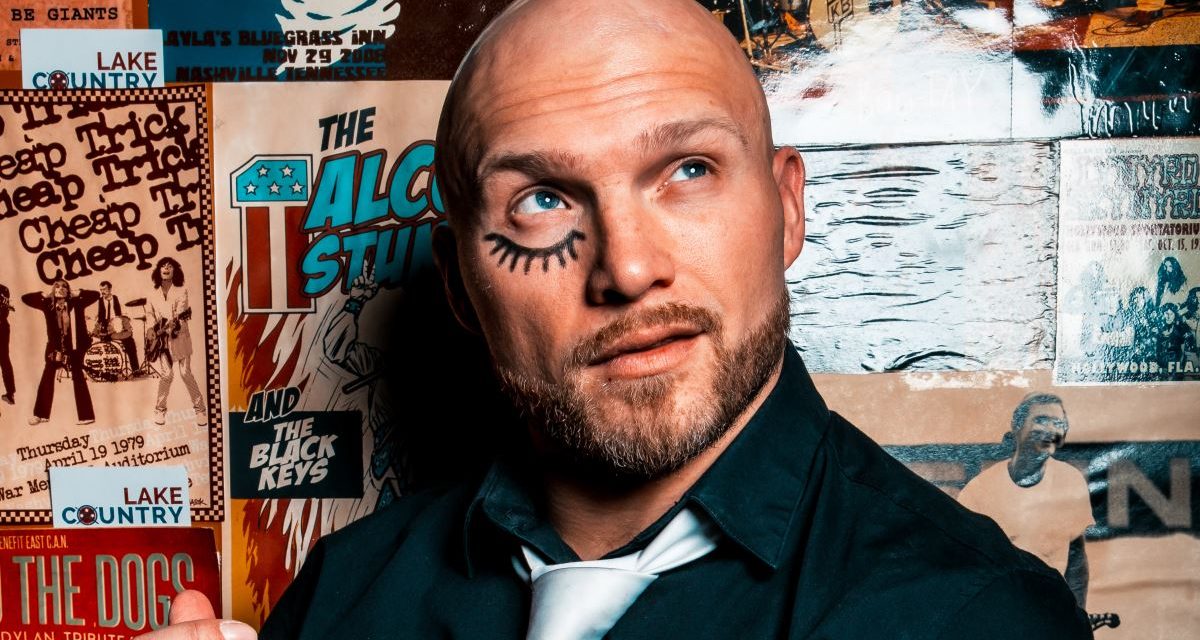 When his music hits, a “tie-wearing, cane-wielding crazy guy” with black eye-makeup on one side emerges. And, according to Aaron Williams himself, people take notice.

“You see a dude walking around with some paint in his eye and some nice glasses walking with a cane when he probably doesn’t need one, you’re probably going to stop and be like, ‘What’s this dude’s deal?’,” Williams said, “and I feel like that’s the thing I’ve got.”

The Cincinnati native has been wrestling for more than a decade, bringing a lifetime of martial arts experience to the squared circle. But it took years to meld his outside interests into the enigma of the “baddest man alive.”

He had pitched the idea of wearing a tie to update his look and was “immediately” shot down. But after separating himself from people who didn’t see this vision, he started gaining momentum. It grew from a Clockwork Orange-esque parody to an “arrogant Mortal Kombat character” who wears all white and brandishes a cane and a hat.

“In a lot of ways, a lot of the places that I’ve been broken out to in the Illinois, Indiana, Missouri area, almost all of the promoters have been like, ‘Man, I know who you are, and I’ve known who you are for a long time, and you’re real good, but you just didn’t have anything that made you pop or standout,’” Williams said.

Williams, who has practiced martial arts for as long as he can remember, started backyard wrestling in the late ’90s and a few years later began officially training at Intense Wrestling Incorporated in Price Hill, Cincinnati. By 2005-06, he had transitioned to former WWE development company Heartland Wrestling Association (HWA), learning from Cody Hawk and Les Thatcher.

“That’s where guys like Jon Moxley, Nigel McGuinness, Chad Collyer, BJ Whitmer, all those guys came from there,” Williams said. “So I got some pretty good brethren to learn from.”

When he broke in, Williams said, the Cincinnati area was somewhat of a hotbed because of companies like HWA and its ties to WWE.

The Baddest Man Alive faces off against Warhorse at a St. Louis Anarchy show at Spaulding Hall in Alton, Ill. | Photo by Robert Bellamy/Mouses Wrestling Adventures

“Then it kind of died out,and it became a place that was hard to get out of,” Williams said. “Unless you had someone to basically pull you out, it was difficult to get out.”

After about 10 years, he said, he started breaking out of the area, bringing his talents to IWA Mid-South, where he won the Ted Petty Invitational – twice.

“The first time I won it, I didn’t expect anything from it,” Williams said, “but the people at IWA Mid-South, they saw something in me and it was in a weird way was validation to myself.”

Breaking out of Cincy

It was those IWA-Mid South matches that caught the attention of Matt Jackson, who books and promotes St. Louis Anarchy in the Midwest.

“His striking is what stood out most when I first saw him,” Jackson said, “then he changed his look and that also stood out.”

Williams garnered his first booking in the Midwest region with St. Louis Anarchy in 2019. From there, he started working with Black Label Pro, Freelance Underground and Journey Pro.

“It’s taken so long to get out in this region and stuff like that, but now that it’s started to happen, it’s almost like kind of a snowball,” Williams said.

Jackson said that he is always looking to add “unique” talent to the Anarchy roster and thought Williams would be a good fit.

“He had a great debut match, the fans liked him and he is a positive influence in the locker room,” Jackson said.

Williams, known now as the “baddest man alive,” said he never really knew who he was as a performer.

“Some people come out of training and they immediately know who they are and then that’s just it, they immediately take fire,” Williams said. “Other people takes a long time. I went through a lot of monikers.”

Aaron Williams debuts at St. Louis Anarchy in 2019. Promoter Matt Jackson saw Williams compete at IWA-Mid South and thought he would be a good fit on the Anarchy roster. Robert Bellamy/Mouses Wrestling Adventures

Then one day he decided to embrace his martial arts background. He had a conversation with a coworker who also used to wrestler, and got the suggestion to meld all of his interests together – that being martial arts, wrestling and over-the-top characters.

That same friend played “Baddest Man Alive” by the Black Keys for Williams and everything clicked.

“I was like, ‘That’s it. That’s my character. That’s who it is,’” Williams said. “So in a weird way, even though I’ve never met any of those guys and they have no idea how much they’ve impacted me, but they wrote a song about my character. And then from there it has grown legs of its own and got all new branches.”