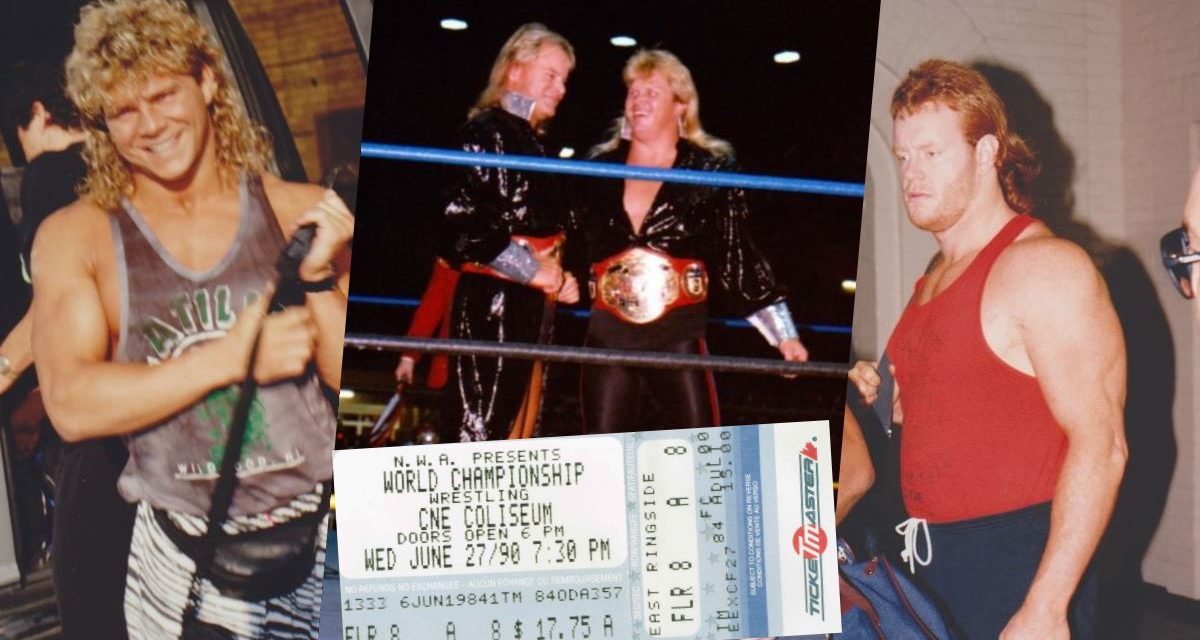 Thirty years ago, the NWA returned to Toronto after an absence of six years. It was a big deal for local wrestling fans, who woke up one day in June 1984 to the news that Maple Leaf Wrestling now featured WWF characters and not the hard-hitting NWA wrestlers from Charlotte they were used to.

The interesting thing about the World Championship Wrestling show at the Coliseum on the CNE grounds was that the promoter wasn’t anyone local, but instead Al Zinck from Halifax, Nova Scotia, 1,800 kilometres away.

Before exploring how it came about with Zinck, how about those results, courtesy the Canadian Wrestling Report (CWR) newsletter:

About 4,000 fans was the estimate (and the venue, now known as the Coca-Cola Coliseum) could have held about 7,000), and the Four Horsemen were definitely over big time, even if they were heels. Flair had the biggest fan base, as he’d been in Toronto regularly from 1977 to 1984, as the Toronto territory at the time was split in thirds: Frank and Jack Tunney (Frank died in May 1983); Jim Crockett in Charlotte; and George Scott, originally from Hamilton, Ontario, but who was Crockett’s booker at the beginning of the deal. 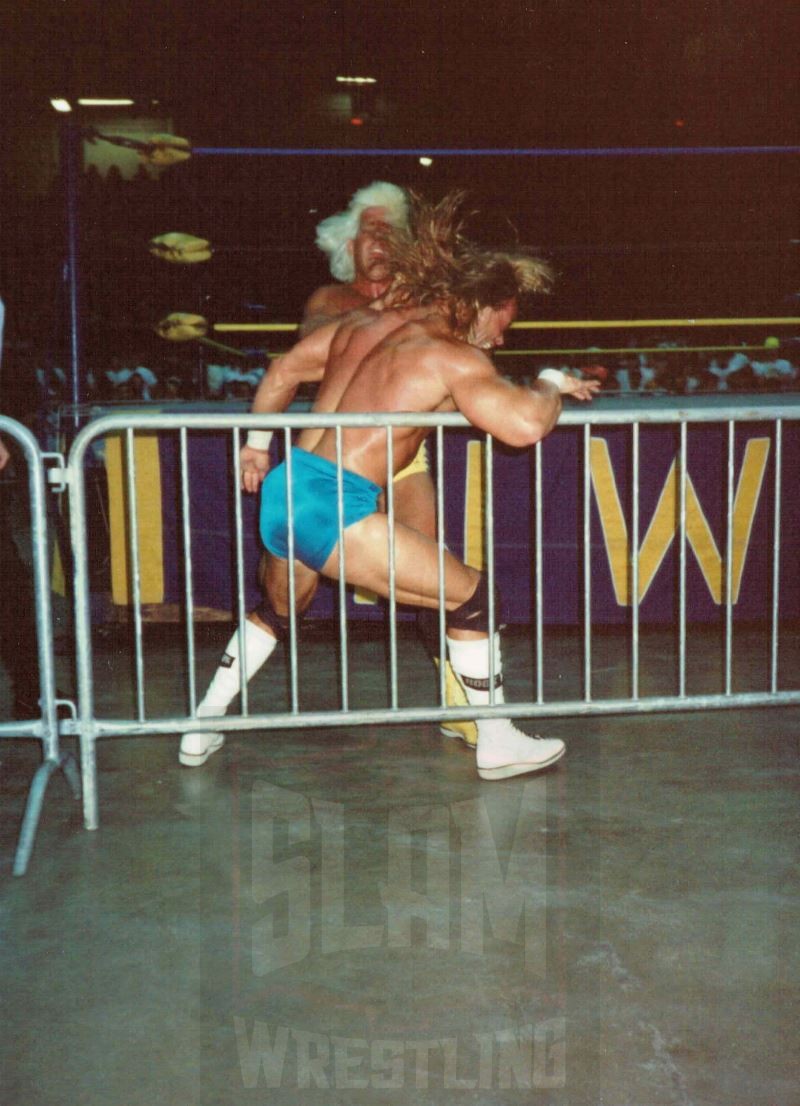 Ric Flair goes after Lex Luger at Toronto’s CNE Coliseum for a NWA show on June 27, 1990. Photo by Greg Oliver

“We want this to be a family night,” Zinck told Norm DaCosta in his weekly Toronto Star wrestling column a few weeks before the Coliseum show, “and that’s the reason we are keeping ticket prices down.” For the record, ringside and gold seats were $13, and the rest of the venue $10, and only $ for kids under 12. The same story noted that Zinck planned to also run two other Ontario cities, Brantford on June 26 and Niagara Falls on June 28.

The story of Al Zinck getting the WCW/NWA deal to promote in Canada is one he’s told often.

It turns out there was a meeting in Atlanta with a number of WCW employees, planning strategy. One of the promoters in the room knew Al Zinck and his success working with the Cormier brothers promoting in Atlantic Canada, and Zinck was called on spec, about promoting WCW in the Great White North.

A second call was placed to Zinck, and the basics were explained to him. “Look, that was Ted Turner you were talking to. We’re still laughing. We’re having a meeting here,” he was told.

Zinck was offered a plane ticket to come down the next day and meet.

The nuts and bolts were worked out with Jim Herd, who was Executive Vice President of World Championship Wrestling at the time.

It’s a good story, if only it was true.

Gary Juster had a variety of roles at WCW through the years, including overseeing all the dozen or so promoters in the different towns across the country.

Once Juster was refreshed of the details – “I will confess that I remember the name, and had you not mentioned his name, I would not have remembered it. If someone had said to me, ‘Hey, who did the WCW shows in Canada in 1990?’ I might have gotten it on multiple choice, but I would not have gotten it just on a short answer. It’s not a name that is still on my proverbial radar screen” – he called Zinck on the exaggeration.

Juster himself only ever met Ted Turner, the famed media mogul, once, though he’d see him around the Atlanta office.

However and whoever was involved was immaterial to wrestling fans in Toronto, who had only the WWF for years, culminating in WrestleMania 6 at SkyDome just months before, on April 1, 1990. 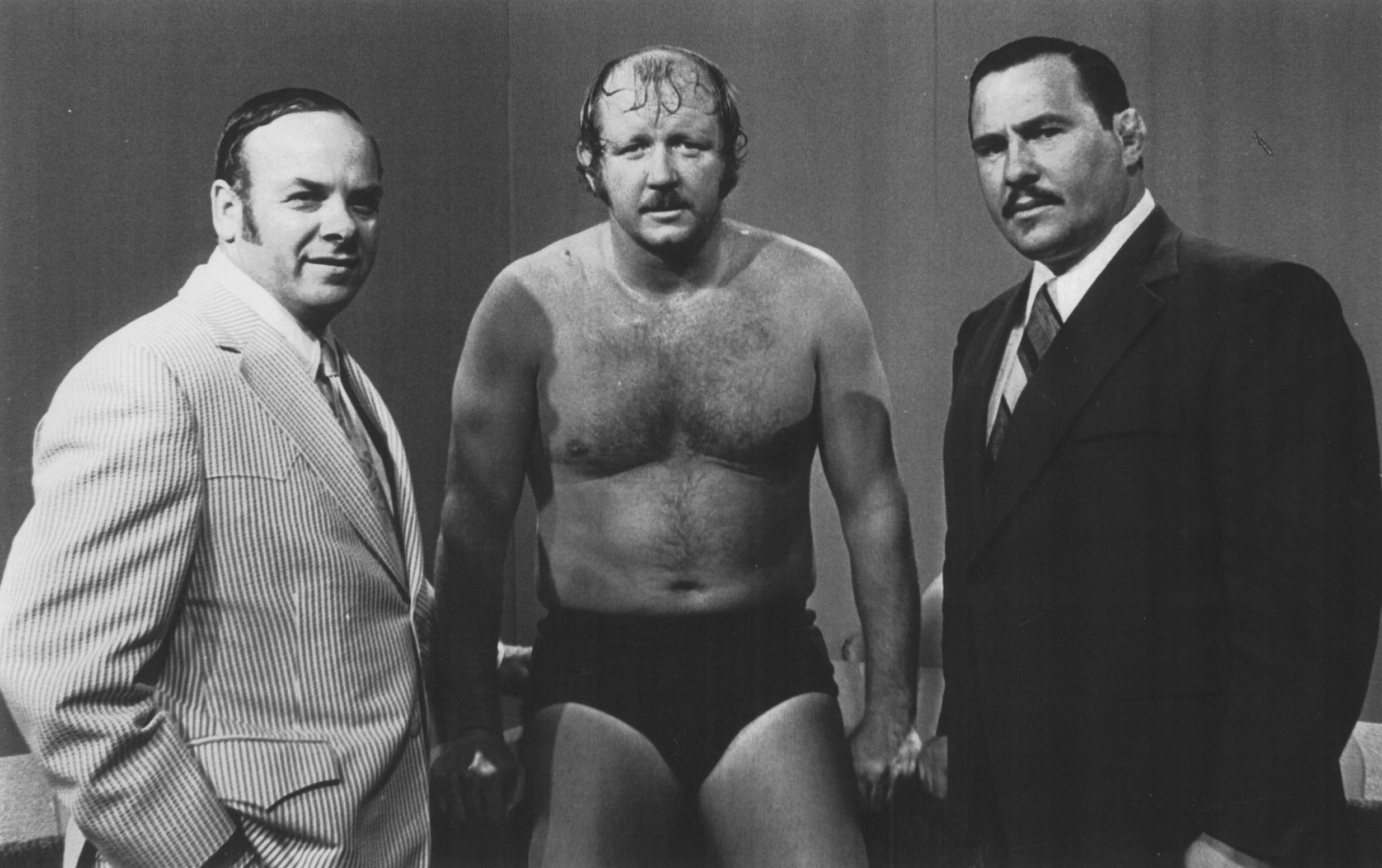 Al Zinck, Dory Funk Jr. and Rudy Kay, when Zinck and Kay promoted in Atlantic Canada in the 1970s.

Zinck, who teamed with Rudy Kay promoting in Atlantic Canada in the 1970s, talked about the experience.

“I was the promoter,” said Zinck, explaining that the booked the venues, placed the media buys, and did the nuts and bolts. But “it was all their money.”

There was a disconnect given that the promotion was in Canada really for the first time. 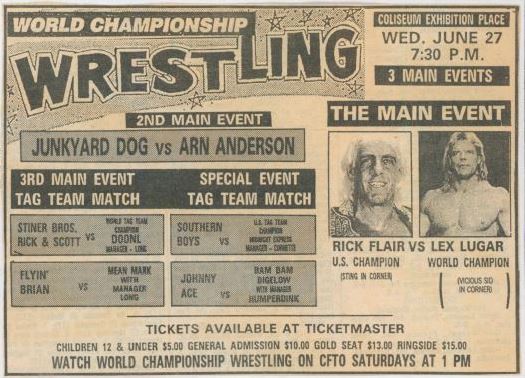 The first newspaper ads, for one, were full of spelling mistakes. “Rick” Flair and Lex “Lugar” are probably forgivable, but Flair as U.S. champion? “Vicious Sid” in Luger/Lugar’s corner? The “Stiner” brothers?

Those ads were corrected, sort of. 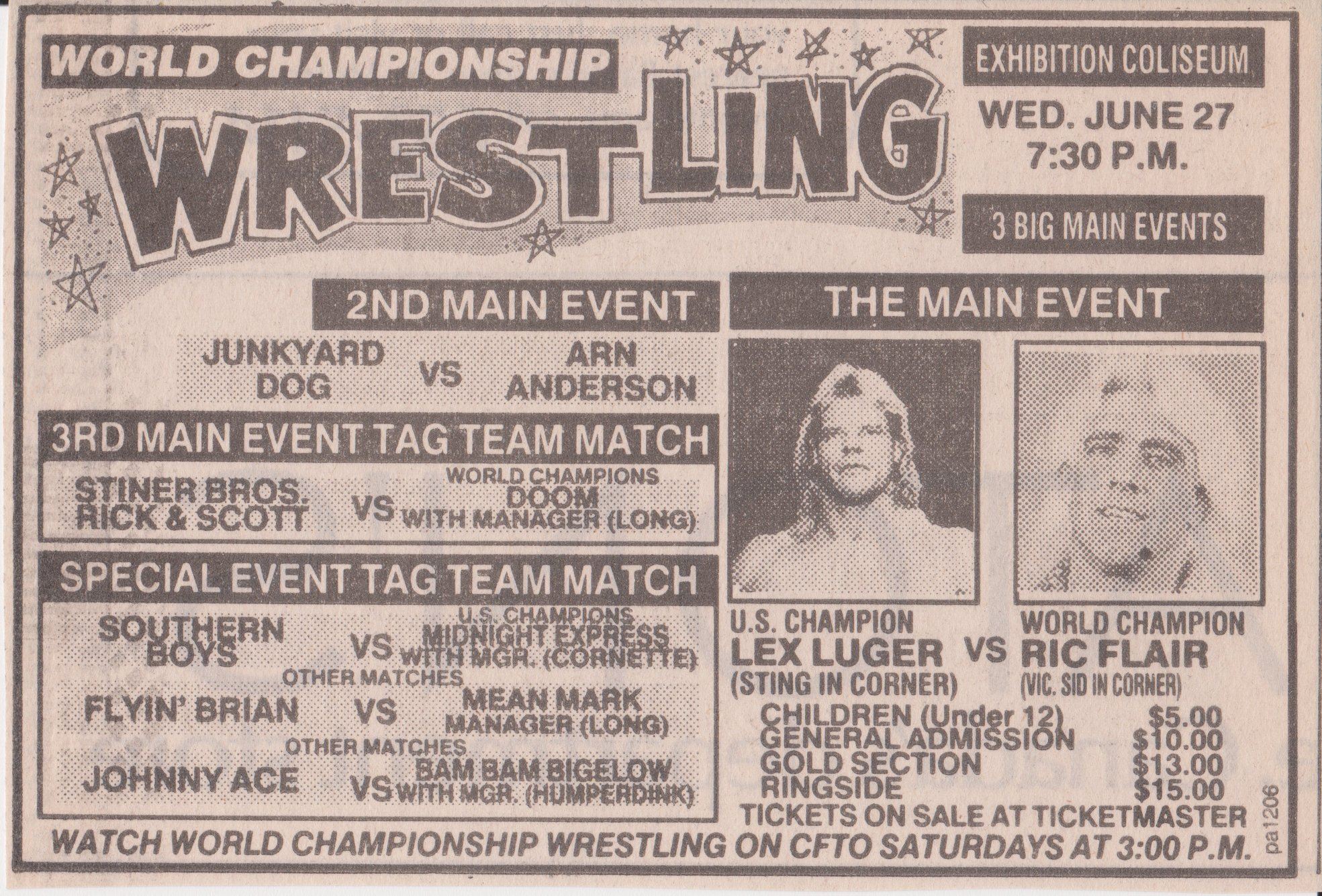 In the CWR, I wrote, “In between matches, announcer Gary Capetta plugged WTBS and PPV until he was informed that all the NWA that we get was NWA Pro and World Wide on CFTO-TV Toronto on Saturdays.” (Years later, I recounted that story to Capetta.)

It was essentially the law of diminishing returns from there. NWA/WCW just never had a good television presence in Canada, and couldn’t compete with WWF. Zinck promoted some shows out in Atlantic Canada, one of which in Saint John, NB, had to be cancelled because of an ammonia leak at the hockey arena.

By 1993, Zinck’s deal with WCW had ended. Tony Condello ran a couple of shows for NWA/WCW out in Winnipeg and Brandon, Manitoba.

“I was always a straight shooter,” said Zinck, who claimed to have shown the WCW TV crew how to better shoot pro wrestling.

The hyperbole is consistent at least. “Ted treated me really good. I had lunch with him, and Barnett was there,” said Zinck, who still lives in Nova Scotia.

Juster figures that it was famed wrestling mover and shaker Jim Barnett that brought Zinck in. “My guess, and there’s no way to know this, is that maybe Barnett had something to do with it. He must have had an in with somebody, it wouldn’t have come out of the blue,” said Juster, who now oversees Ring of Honor’s live shows. “But, see, Barnett by the time he came to work with us, he knew all the people in the industry. He’d gone way back with the Tunneys and all kinds of others, so there’s a chance that that was the connection.”

With Zinck out of the picture, Juster organized the next Toronto event, at SkyDome. It was easy for Juster to recall those details, as it tied in with the World Series and the Blue Jays facing the Atlanta Braves in the fall of 1992. Juster asked his contact at the Dome to invite him up for a game, since if he was invited, his employer would have to pay. It was Game 4, Wednesday, October 21, 1992, as Jimmy Key out-dueled Tom Glavine on the mound for a 2-1 Jays win.

“I had begun conversations with them about doing in a show in what they called SkyTent, which was about a 10,000-seat tent within the Dome. We did one of those shows, and that’s why I went. Al Zinck or no Al Zinck, I did shows up there starting in the 1990s,” said Juster. 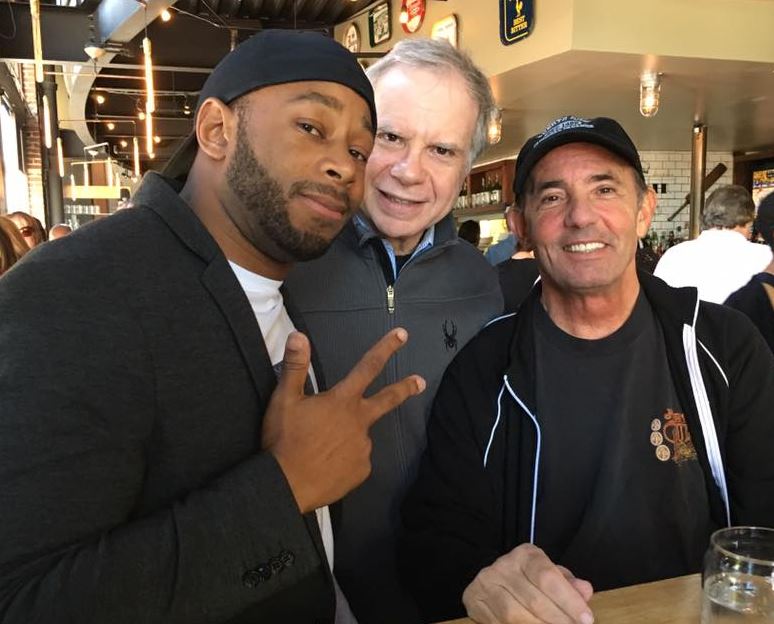 That SkyTent show was a matinee on Sunday, April 18, 1993, with these results:

It was Juster who later made the deal for WCW to run at the brand new Air Canada Centre, including 1999’s WCW Mayhem pay-per-view, where Bret Hart beat Chris Benoit for the WCW World title.

Regardless of who ran the shows, fans in southern Ontario were thrilled to have competing promotions in town at the highest-level for the 1990s.