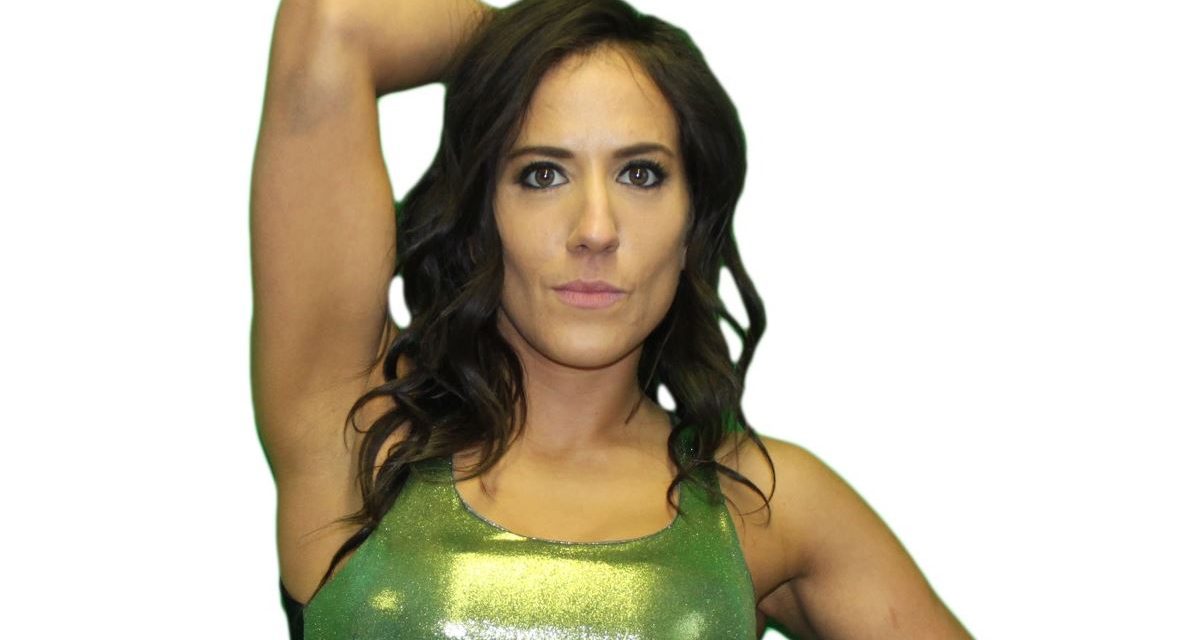 After months of trying to keep busy at home and crushing her Diamond Dallas Page Yoga workouts, “The Masterpiece of the East” Alix Zwicker will finally be able to get back into the ring on Friday, in what is believed to be the first Canadian show with a crowd since COVID-19 shut down the country.

It’ll be at a Canadian Wrestling’s Elite, Friday, June 12th, at Rookie’s Sports Bar (201 Melrose Ave. E) in Winnipeg, MB. The show is cheekily-titled “Patient Zero,” and only 100 fans will be allowed in to watch.

“I’m jacked to get back on the road,” she said, “I just really missed everyone.” Zwicker said she’s not really too concerned about the pandemic anymore and she’s ready to get back to her in-ring work.

“I’ve been going to my regular job, trying to maintain a little bit of balance and looking forward to getting back to normal!” Zwicker said in positive, upbeat voice.

It was this personality trait that got the Maritime native’s career off of the ground.

“It was my boyfriend at the time who was approached by a promoter when I was living in Halifax and they told him he had a good look to become a wrestler,” said Paige “Alix” Zwicker in a phone interview with Slam Wrestling.

She added that he wasn’t into wrestling when he was younger, but knew how much the squared circle meant to her. “He ended up doing a small role with this promoter just so he could mention, ‘Hey, you know my girlfriend has been a wrestling fan since she was a kid, she would love this.’ That’s basically how I got my in.”

Though, Zwicker didn’t start off squaring up against opponents in the ring.

Working as a valet, the self-proclaimed “Masterpiece of the East” would make the effort to get some reps in before some of the shows she was on. She also travelled for coaching. “I would go up to Saint John every other month when it was peak wrestling season and the running joke was, ‘So, when are you going to move up here so we can train full time?’” In 2015, Zwicker decided to take the plunge and move to New Brunswick and focus all of her time and energy on truly learning to be a professional wrestler.

“I trained about four to five times a week for the first six months that I lived there and then I ended up getting the opportunity to debut.” Zwicker admitted that she made her debut too soon, but learned from her mistakes. “I know that there’s only so much you can learn in training, but it would have been nice to get a couple more reps in and get my feet under me a little bit more.”

Technique is only half the battle in the ring. With this in mind, Zwicker had another hurdle to jump, one that would lead her to figure out who she was.

When she was working as a valet, she would aim to portray a similar image to the male wrestler she was cheerleading. Usually, she was a heel. “I tried to be a snooty classy girl when I was with James Steele and when I was working with ‘Country Idol’ Chris Hicks, I ended up being a country girl.” When Zwicker branched out on her own, she had an even harder time determining who she was supposed to be in the ring. 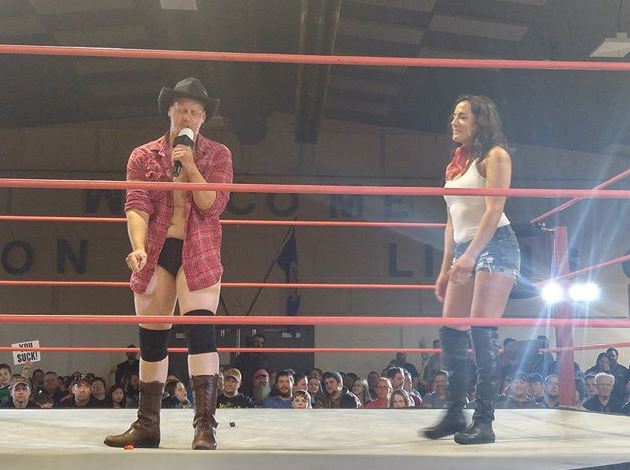 “Everyone always told me that I was so bright and bubbly, like a babyface. Then, I teamed up with my girl Maddison Miles, who is the ultimate babyface, so I finally felt like I could be myself,” she said. It was more natural for Zwicker, it was simply her own personality but dialed up.

Zwicker also learned a new skill while wrestling, except it had nothing to do with grappling.

She taught herself to sew and make her own patterns for her gear. She invested in other tools to put herself out there for different promoters. “I’ve been trying to learn a little more about photography so I can do my own photoshoots and I’m making my own merchandise. I’m really trying to up my game in every aspect of my gimmick,” she explained.

Others have started to take notice of her hard work as well. “The sky is the limit for Alix for is any reason, her drive and dedication to advancing in the business is a lot passion in a lot of today’s generation of new wrestlers,” said Danny Warren, who is promoting the CWE show on Friday, and wrestles as Danny Duggan. He added that Zwicker has made many sacrifices in her personal and professional life to get where she is in the ring more than any other independent women’s wrestler in Canada. “That work ethic combined for her personality, marketability, and talent is the perfect storm for success.”

The Masterpiece of the East has been gaining traction with different promotions across Canada, such as Canada’s Wrestling Elite, Pure Power Wrestling and Vision Pro Wrestling. She networked at the 2019 Cauliflower Alley Club reunion in Las Vegas, and even won the unofficial late-night strut-off with Maddison Miles. 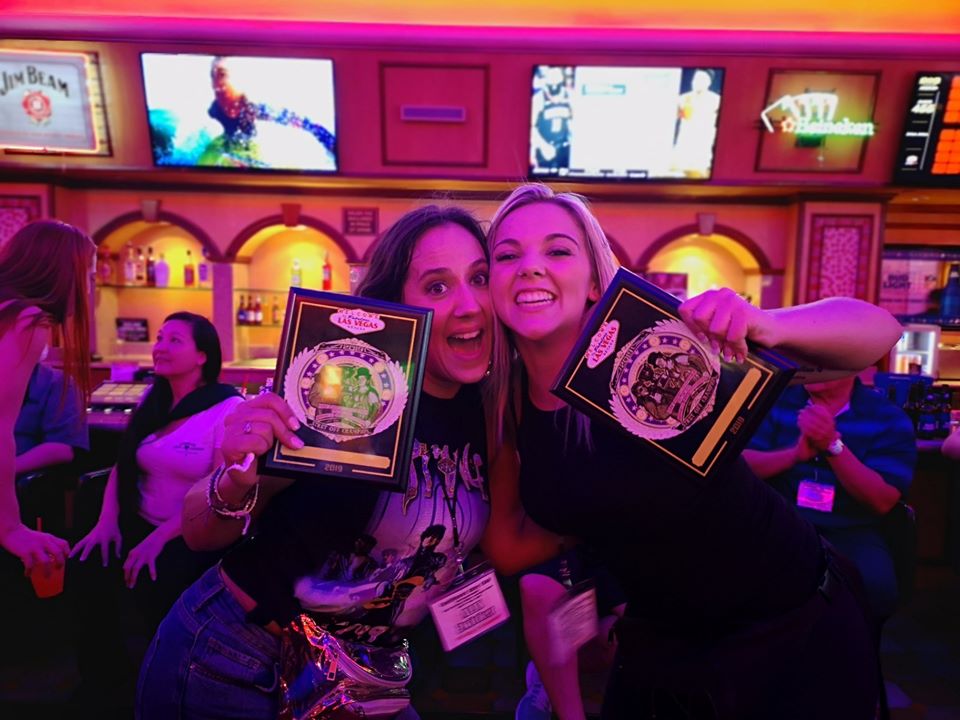 Alix Zwicker and Maddison Miles with their plaques at the Cauliflower Alley Club reunion in 2019.

“It really sucks,” she said, getting choked up. “As hard as it is, it’s also a weird relief that I don’t have to put my body through the ringer, but the fact that I won’t get to see people is killing me.”

During quarantine, Zwicker put her mind and body to productive activities. “I’ve been having wicked home workouts and doing more DDP Yoga than I’ve ever done before.”

Zwicker uses that same mentality when planning her future goals, or whenever she is able to resume her in-ring appearances. “I want to work with people who are more experienced than me and can really teach me the things that I need to know that will make me into the wrestler than I’ve always wanted to be,” Zwicker said. 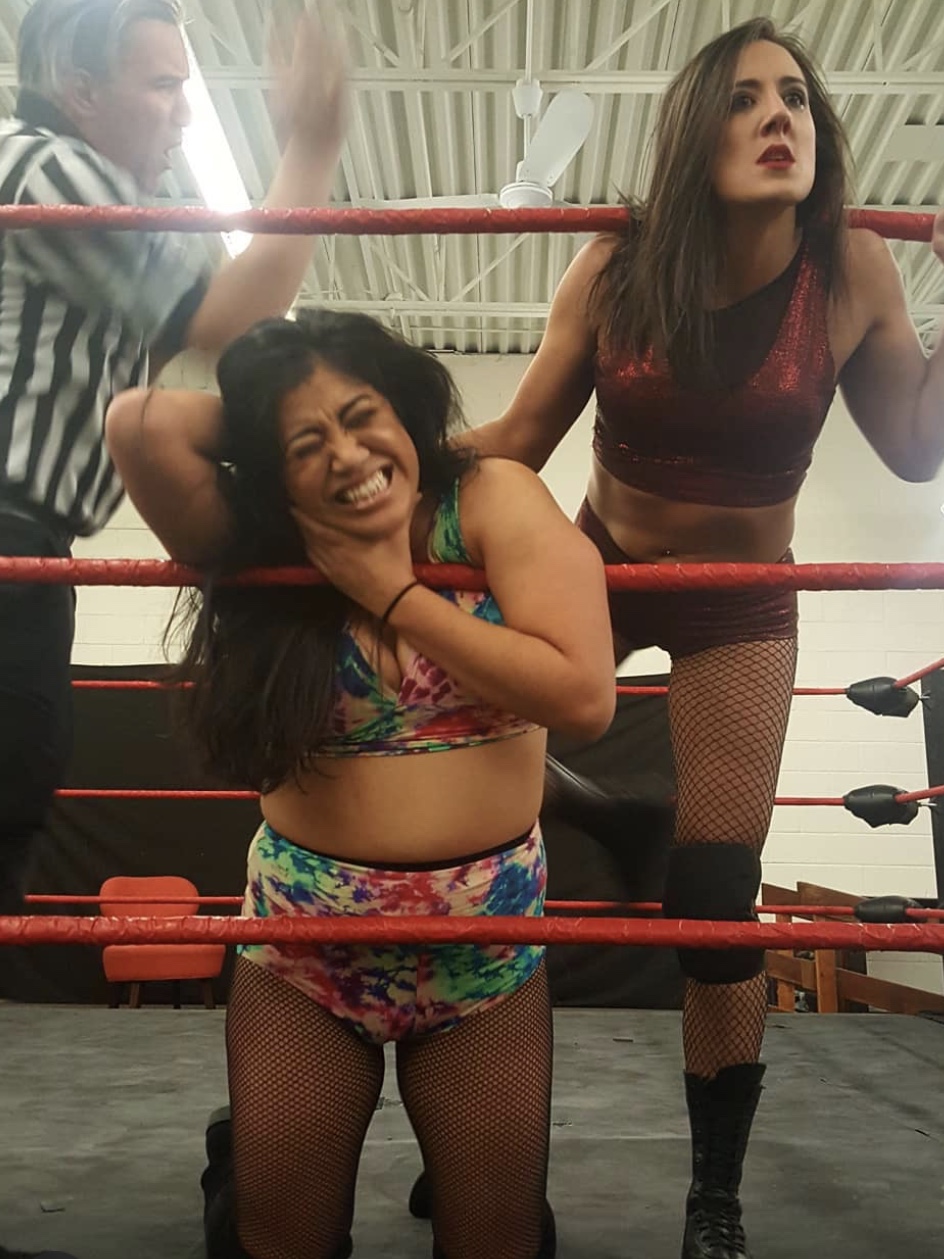 She wants to push herself, work on her confidence and get as much practice as she can. “I need to put the effort in the areas that it needs to be.”

Zwicker, in her early 30s, said that she can’t wait anymore, that she needs to learn as much as she can so she can achieve something she’s always wanted: to be a full-time professional wrestler.