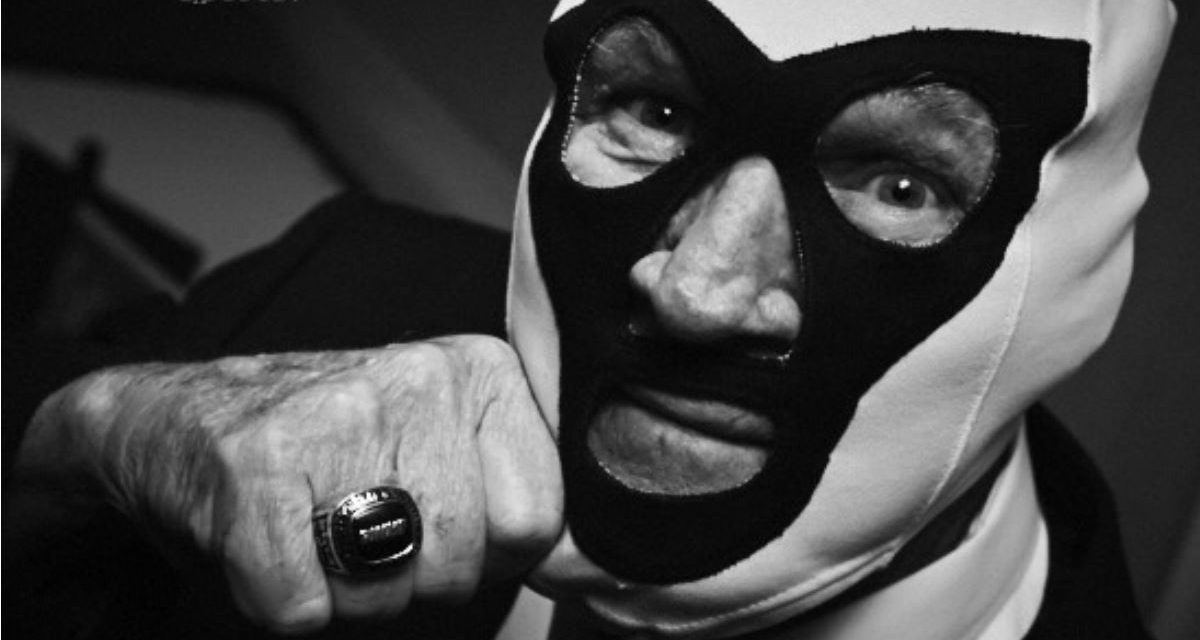 One of the most magical experiences this writer ever had was wandering through the Professional Wrestling Hall of Fame, then located in Amsterdam, New York, with the legendary “Mr. Wrestling II” Johnny Walker. With news of his passing at the age of 85 in Hawaii reaching mainland shores in the morning of June 10, those memories came flooding back.

For the record, Walker was unmasked as he wandered through the museum. My son, Quinn, who was seven years old at the time, asked him what he thought of the PWHF.

“I’m knocked out, believe me. It’s the most magnificent thing I’ve seen in ages. It’s absolutely gorgeous. They’ve got guys on the wall that I used to wrestle back in the ’50s and ’60s — ’49 actually was the first time. God Almighty, I can’t believe they have so many fine fellows out here. I’m flabbergasting, I don’t mind telling you. I really am,” he said.

What in particular? Two things came up on that May afternoon in 2014, one about friends and the other about his late wife, Olivia.

“I like all the pictures. They bring me back many, many years, and I think about the people.”

“The robes over there, I see robes that my wife had made many years ago for Ric Flair, Lou Thesz, Paul Orndorff, many of them.”

Walker was born September 10, 1934 in Charleston, South Carolina. He was trained by Tony Morelli and the Pat O’Connor, but didn’t start off in a mask, but was remarkable none the same.

He was initially Johnny “Rubberman” Walker, playing off his ability to bend his body in unique ways. Houston promoter Paul Boesch nicknamed him. Wrestling Revue, in its Fall 1960 issue, noted: “fans who have watched the incredible Walker ooze and bounce out of intricate holds that had ruined many a top-notch wrestler.”

Walker also wrestled under a mask in Florida as The Grappler for a time. 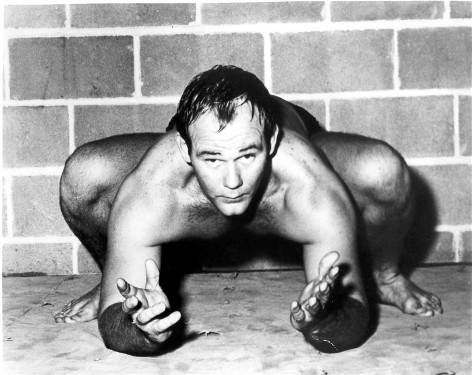 But it was with a mask that everyone got to know Mr. Wrestling II, including the President of the United States.

Mike Mooneyham detailed the relationship between the Carter family and II in The Pro Wrestling Hall of Fame: Heroes & Icons:

Walker was even invited to the White House. He shared a close bond with former President Jimmy Carter, who considered No. 2 his favorite wrestler, and was personally invited to attend the Georgia native’s inauguration in 1977. Walker, though, reluctantly declined a seat with the Carter family when the Secret Service told him he would have to remove his famous mask due to security concerns.

A wrestler’s mask stood for something in those days, and Walker took the values symbolized by the white hood he wore quite seriously. “But I understood why they did it,” said Walker, who was rightfully concerned about the damage it might have done to his career had he revealed his identity for all to see.

The President understood, and so did his mother, “Miss Lillian” Carter, a down-to-earth, devout grappling fan who religiously attended the weekly matches and was perhaps No. 2’s No. 1 fan. “She used to come down to Columbus, Ga., to watch me wrestle,” recalls Walker, who was even invited to her home in Plains, Ga. For that visit, anyway, Walker got to keep his famous mask on. “If you folks don’t mind, I’ll just leave the mask on,” he told agents who accompanied him to Miss Lillian’s home.

“She didn’t want anyone coming in while we were talking. We probably talked more than two hours. We discussed all kinds of stuff. And the whole time I was in there she never cracked about wrestling. And I appreciated that.” 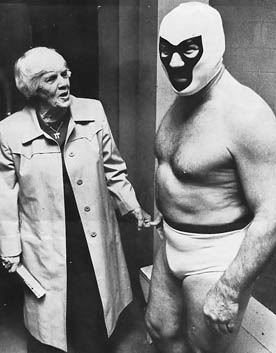 The story of how Walker became Mr. Wrestling II naturally stems from Mr. Wrestling, who was Tim Woods. In Atlanta, Woods was a massive star, but he’d moved on. Booking in Atlanta was Jerry Jarrett, and when he was unable to secure Woods’ return, he picked Walker, even if he was getting close to 40, and had been mostly a journeyman during his career, which began in the 1950s. Woods did give Walker a little rub, as the two Mr. Wrestlings tagged up for a time.

Walker didn’t know Woods prior to the teaming, but told Steve Johnson, “The man had a great reputation.”

They would pair up here and there, and it always worked. They were “better than brothers. We never had an argument, never had a disagreement that amounted to anything, ever,” said Walker. “That’s unusual for tag teams, because a lot of times, people have one idea, and this guy has that idea, and then they clash. But never Timmy and I never, ever had any problems one way or another.”

It wasn’t all heroic, though. On August 8, 1953, Walker was one of nine suspects arrested in connection to the rape of a 15-year-old girl in Hawaii, at Sandy Beach. Walker was 18 at the time, and worked at a service station in Waikiki. According to the Hawaii Criminal Justice Data Center, Walker’s disposition was July 27, 1955, and for the rest of his life he was a registered sex offender wherever he lived.

His wife’s work — including his mask — had a stardom of its own. Olivia was a seamstress and worked with all the greats for years, including Ric Flair, Dusty Rhodes, Lex Luger, the Killer Bees. In a 1988 interview, Olivia was asked how many robes she’d made. “It’s either 972 or 792,” she said. “Let’s say 972. That sounds better.” Some robes went for $8,000, and one Flair masterpiece had 7,200 rhinestones, all applied by hand.

Long-time wrestling journalist Bill Apter broke the news of Walker’s passing in the morning of June 10. He’d gotten a call from Walker’s son, Robert, from Hawaii. Apter had video-chatted with Walker only two weeks ago, and called II “an uncle, a brother, everything to me.” 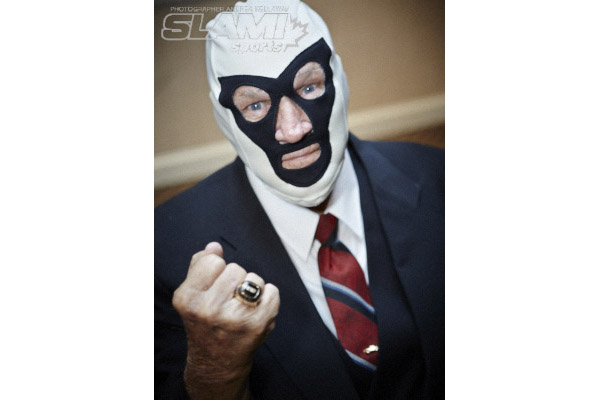 Walker had a tough two decades, said Robert at his father’s induction into the Professional Wrestling Hall of Fame in 2014. (One of those was a heart attack just after being inducted into the Mid-Atlantic Legends Hall of Heroes in 2010.)

“We lost my mother in October of 2000. I often wonder why the good Lord took her at such a young age,” said Robert Walker. “I believe that the good Lord truly took my mother at an early age to become my father’s personal angel. Over the last 10 years, we’ve had a lot of hardships and tough times with my father’s health, and through car accidents to strokes to congestive heart failure and open heart surgery, all to come back to recover, playing golf once a week, hitting the gym three times a week, swimming in the ocean, and still enjoying life. So we appreciate that and I believe that was her role. I believe the Good Man Upstairs has a lot more in store for him, and I am most thankful that my father is still here to be a part of my adult life and most important, a part of my children’s, his grandchildren’s lives, and provide a little bit of those fundamental foundations and fundamentals that he taught me as a young man. Without further ado, I’d like to introduce my father, John Walker, Mr. Wrestling II.”

With that, Walker got to the lectern, where there was some joking around with fellow masked legend “The Sensational, Intelligent Destroyer” Dick Beyer.

“How can I top that? Now, I’ve had a lot of very wonderful times in professional wrestling and lot of fun times with a number of wrestlers throughout the years,” began Johnny Walker, launching into a lengthy story, which you need to read to yourself in his soft, Southern drawl, well-spoken, but humble:

One stands in my mind more than anything. I was looked at as someone who was in pretty good shape, and I kinda thought I was too. For many, many years I thought I was in as good as shape as anybody. But I took on Pat O’Connor and … I got behind Dick Hutton one time and took him down. He no sooner hit the ground than he was up, looking at me. …

Don Curtis and Pat O’Connor damn near killed me. We went to the gym one day for a workout — it sounded like my kind of stuff and we were going to have a good time. They took turns getting on my back. I said, ‘Okay, come on, do it!’ We made one good circuit between them, then finally Don Curtis had me down and I made my attempt to escape. Then finally, one thing lead to another, and in other words, I ended up on my belly looking at the floor. He got up and said, ‘How you doing, John? Get up! Let’s go.’ Shit, I couldn’t get up. I was bagged. ‘Are you ribbing me?’ ‘Yeah, sure, you damn near killed me. Why don’t you get it over with.’ Between the two of them, they damn near did. I was sucking wind, let me tell you. And that was perhaps one of the highlights of my career. I enjoyed it very much. …

With that, “Mr. Wrestling II” Johnny Walker left the stage.

EDITOR’S NOTE: This story was amended on June 11, 2020, to add details of his conviction of rape.