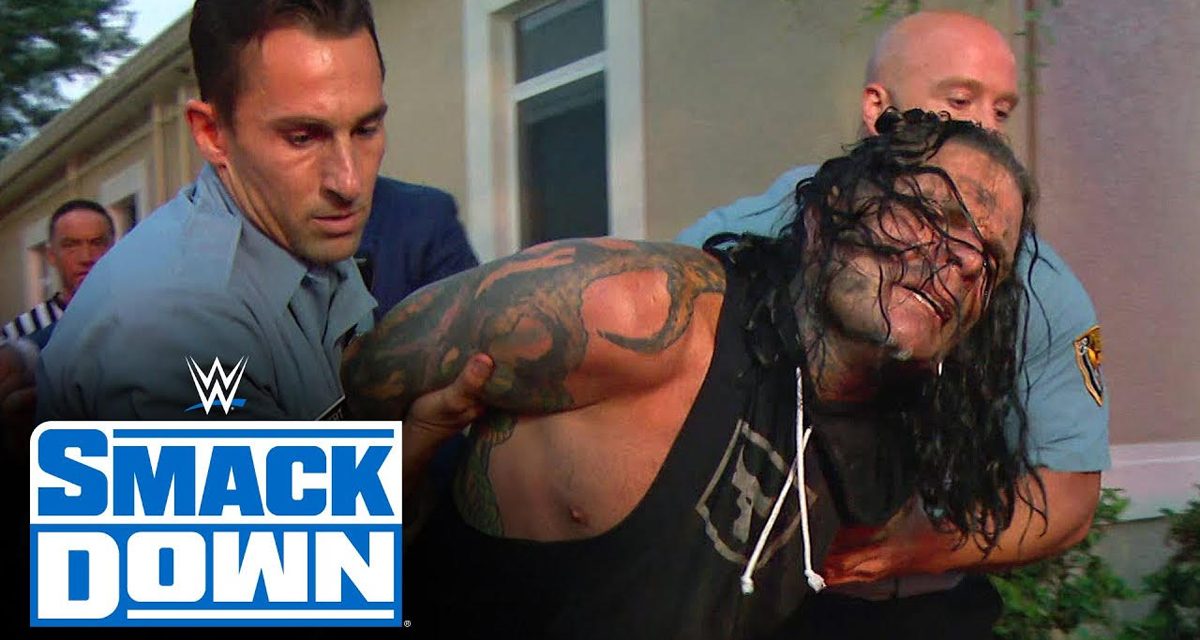 An appalling case of “art imitates life” opened a drama filled Smackdown; Elias was stretchered out of the Performance Center when a silver Toyota struck the ill-fated rockstar. That silver rental car, possessing a bottle of alcohol, was traced to Jeff Hardy. The alcohol reeking Hardy was arrested on-screen, mirroring his infamous real life issues with DUI’s.

However, the possibility that Hardy was framed still stands. Was it rival Sheamus? Arch nemesis King Corbin? Fellow semi-finalist AJ Styles? Perhaps it was Jeff Hardy after all. Some unanswered questions and line-blurring antics shaped the 5/29/20 edition of Smackdown.

The competitors battle for leverage, and Dorado is eliminated by Corbin. Gulak tries to take advantage of the precarious King before being thrown over as well. Welcome back Drew Gulak! Corbin and Ziggler work together on Metalik helping The King get his third elimination. The team proves short lived when Ziggler attempts a failed sneak attack, resulting in another victim to Corbin. He turns around after his fourth elimination into a superkick from Uso, removing him from the match.

Back from commercial, Sheamus and Cesaro take control, reminiscent of “The Bar”. Shortly after, Jey Uso and Shorty G turn the tide with Nakamura getting offense as well. Cesaro powers Shorty G over the ropes, but the relentless G switches the momentum sending Cesaro to the floor. Shorty G then eliminates Nakamura before an irate Cesaro returns and throws G to the outside. The final two men, Jey Uso and Sheamus, trade blows on the apron. Uso throws a superkick and gets caught. He’s thrown into the ring post and runs into a Brogue Kick from Sheamus.

Sonya Deville is backstage calling out her opponent, Lacey Evans. Unknowingly, Evans is right behind her and shoves Deville to the ground. Evans gets the last laugh:  “Come on then, you nasty. See you in the ring.”

Shorty G argues with Cesaro and Nakamura over his stolen opportunity. Cesaro pulls the height card telling G to just walk away. But Shorty G answers with a cheap shot, setting up a match for tonight.

Deville attempts two shots, both blocked by her opponent. Evans gets in “referee’s position” allowing Deville to get on top before the two scramble for position. Deville puts her hair up (a signature action), and “The Southern Bell” does the same. She pulls a handkerchief in mockery which doesn’t sit lightly with Deville; the match turns aggressive and spills to the floor. A fistfight emerges while the ten-count sounds, ending the match in a double countout.

Evans demands a continuation of their brawl, but Deville into the commentating mic says, “I’m fighting on my terms, blondie.”

The Forgotten Sons’ third vignette plays. This time Wesley Blake gives his story: “…Our blood was on your hands. So now it’s only fair that your blood is on ours.”

A Moment of Bliss

Bliss and Cross hand their guests, The New Day, a present: homemade Scottish pancakes. The Smackdown Tag Team Champions return the favor with some coffee beans stored in Big E’s singlet. Kingston and E say that The Forgotten Sons are a standout tag team and ask the Women’s Tag Champs who’s on their radar. They’re interrupted by Smackdown Women’s Champion Bayley and Sasha Banks. Bliss points out the five champions in the rings and asks, “Sasha, where’ s your championship, girl?” Banks retaliates by saying she and Bayley could win the tag titles right back. This tempts Bayley to issue a challenge between Banks and Bliss to which Banks seems to resent.

Bayley and Cross take to commentary while Banks is tying her street shoes — obviously unprepared for her match. The champion gets the early advantage, before Bank’s eventually reverses with her signature double knees. “The Boss” works her opponent down while Nikki Cross cheers her partner on. Bliss fires up, but Banks regains control. The champ counters with a hurricanrana and forearm, setting up for “Twisted Bliss” before Bayley tries to interfere. Cross comes to save but inadvertently shoves her partner off the top letting Banks get a flashy rollup for the win.

Shorty G comes in hot with “rolling thunder” kicks and a top rope moonsault. G tries to target the left leg before running into a closeline as Cesaro takes advantage. Shorty G attempts another “rolling thunder” kick but is caught in mid-air with a powerbomb. The Swissman gives an uppercut and has control once again. The two have a series of roll throughs until Shorty G gets the surprise three count.

Mr. Money in the Bank Otis and his girlfriend Mandy Rose are poolside with peach champagne. They cheers to alone time as Otis finishes his drink in one big gulp. Rose takes a nap, and the cameras cut to inside of her dream; Otis is arising from the pool in steamy, slow motion. He rips his shirt off and they join together to make out. The dream is halted when Otis cannonballs into the pool. Rose gets in with Otis while they make out again in reality.

Kayla Braxton interviews Sheamus before the main event. He’s tired of people like Matt Riddle and Jeff Hardy getting the attention and talks down Daniel Bryan. Bryan arrives and squares up with his opponent. Without saying a word, he stomps on the foot of Sheamus sending a message.

The two chain up, and Sheamus has the power advantage. Bryan comes back with strikes in the corner, but Sheamus takes back control. Bryan counters with the top rope flip and running elbow, tossing his opponent to the floor. He goes full steam through the ropes before the break.

The semi-finalists tussle for control, and Sheamus rains down the strikes. He takes the match outside and whips Bryan into the barricade. He tells Michael Cole to cheer and help Bryan. Back in the ring, Sheamus says “I created the YES Movement! 18 seconds at Wrestlemania!” He gets his opponent into the Cloverleaf until the break is forced. Bryan gets to the top and hits the missile dropkick, followed by the “YES Kicks”, but is countered by Sheamus’s “White Noise”. He looks for the Brogue Kick until Jeff Hardy appears at the ramp. Sheamus turns around into the “Knee Plus” from Bryan for the 1-2-3.

Hardy storms the ring, and Sheamus retreats. The finals for the Intercontinental Championship are set: Daniel Bryan vs AJ Styles.