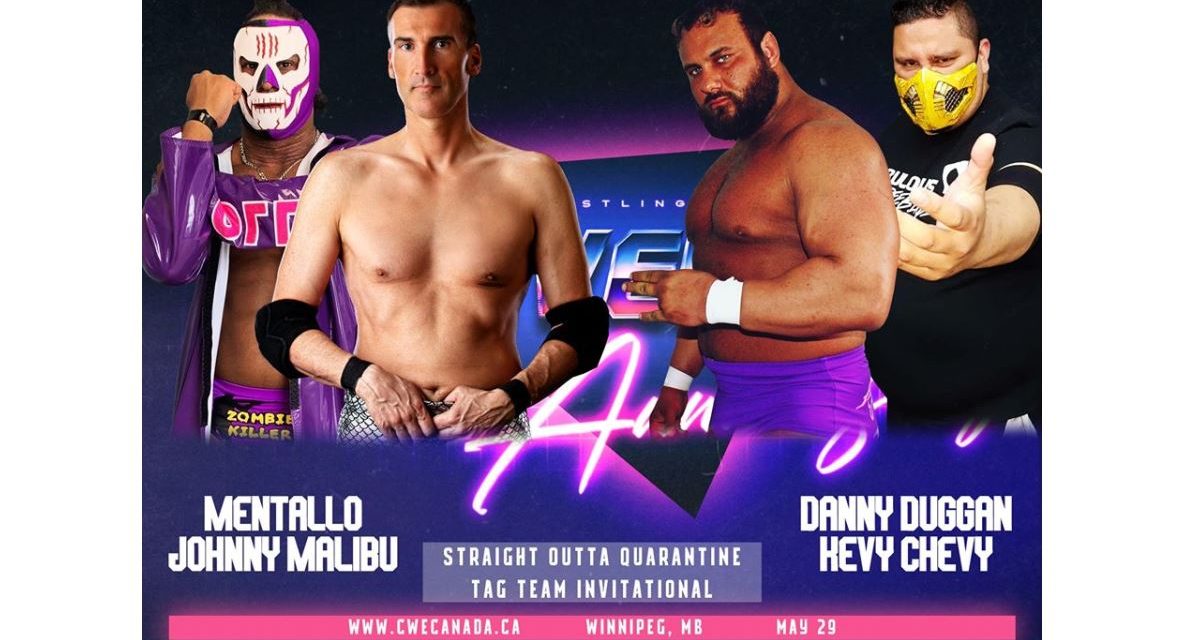 The cross-country pandemic emergency has stopped scheduled sports and community events, and that rippled thru the wrestling industry coast to coast. No promotion in Canada was more affected that Canadian Wrestling’s Elite promotion, which usually runs extensive month-long tours and adds big shows, regular venues and spot shows in between. CWE will be bringing legendary stars Shane Douglas and Vampiro on the relaunched Extreme Consequences tour in October and November, and is aiming to ramp up operations now.

With guidelines loosening up to allow for more athletes to gather, CWE is picking up the schedule this Friday at 8 p.m. Central with the over-due 11th Anniversary Show, a no-fans, Facebook Live presentation from the Winnipeg training facility on Friday evening. The tag team competition in CWE has been a great source of fan satisfaction and therefore CWE has scheduled a Straight Outta Quarantine Tag Team Invitational tournament to thrill online viewers with eight pairs entered. View it here.

Not everyone would so quickly enter into a more crowded-together activity like professional wrestling, in light of COVID-19 contagion concerns. But the CWE reigning champs, Rebel Bobby Collins and Strongstyle Rob Stardom, are coming in from rural Manitoba to prove they are tops.

Slam Wrestling wanted to find out why wrestlers would rush to do matches with no crowd drawn by design (actually, government mandate). We not only heard back from a wrestler — a top competitor in the tag team scene in many promotions across the west for three years, Kevin O’Doyle — but also, from one of the guys in a striped shirt, senior official Mike Wiseman, who will be in-ring arbitor for the tournament.

My name is “The Boston Bruiser” Kevin O’Doyle. I started training to wrestle in 2016 ,when I was 32 years old. My official debut with CWE was on May 19, 2017, since my debut I have been pushing myself to get in as many matches as I can. By my records I have had 198 matches before the March shutdown, and would have had more than 200 under my belt by the end of March otherwise. These matches have featured some of the best in the industry like ROH Stars TK O’Ryan and Vinny Marseglia, WWE legends like the Warlord, Psicosis, Juventud Guerrera, and WWE Hall Of Famers like Jake the Snake Roberts, Ron Simmons and The Godfather.

The COVID-19 crisis has been has really hit independent wrestlers because we rely on shows to become better at our craft. I was set to do 17 days of the tour prior to it being canceled. This was supposed to be a year that I push myself to the max, it started off strong but with it suddenly stopping I know have to try and salvage this year.

I have been involved in five tours, traveled from BC to Ontario and gave 100% every time. On Friday May 29 2020 at the 11th anniversary show I will be competing with my longtime tag partner, “The Canadian Crusher” AJ Sanchez to win back the CWE Tag Team Titles.

I love wrestling because there is nothing better then performing in front of a live crowd, I feel that we provide a necessary distraction for people so they can take two hours out of their lives and cheer or boo to their hearts content. I have made friendships with people that I am closer to then my own family.

This crisis will not beat me because I am going to comeback from this tougher and stronger, nothing can defeat me because O’DOYLE RULES.”

Mike Wiseman got into the wrestling business in 2017 at the age of 41 and is now 44. His first experience as a referee started on the CWE Pick Your Poison tour with Jake Roberts at the end of 2017. His story:

I spent a few weeks on the road with the crew and had so many great times across Western Canada and was hooked. Since then I have taken part in multiple CWE tours and done shows for various different companies in North America and each one has left a ton of memories and I have met some of the most hardworking, amazing athletes from around the globe. These tours aren’t easy and for those that do them from start to finish have my upmost respect. It sure is a grind going from town to town, city to city every single night. I fell in love with wrestling at a young age and to be part of it at my age now has given me a spark that I hadn’t seen in awhile. It can be tough at times traveling to shows but we all have a reason for doing it. Personally I love meeting new people and seeing the reactions from the crowd is energetic.

This Friday is the CWE 11th Anniversary show and I did not want to miss it. Any anniversary show on the independent scene is an important one as so many companies come and go and are short term so to be going for over a decade is pretty impressive. The itch is there to shake off the rust and give the fans what they want so here we go.

On the COVID issue, COVID is a real thing and in regards to the wrestling world it has been devastating for some independent promotions. I have seen so many shows cancelled all over and when promoters rely on their shows to pay their bills, the lockdowns and restrictions put in place have basically cut that income out completely. I know fans right now are itching to get into the seats and see their favorites perform but we have to be extremely careful about how we proceed. Knowing the fans want to see a product is why we have done closed set shows on Facebook Live. The fear of what COVID is and could be is terrifying to some but as the restrictions ease and we “flatten the curve” we must not live our lives in fear and slowly get back to as close to what was normal before the pandemic hit.

Wrestling is alive and well on the independent scene and as the restrictions ease you will see this business boom in the years to come and I am looking forward to being part of it for a long time.

— compiled by Marty Goldstein, who was originally scheduled to participate in the CWE 11th Anniversary event, but is following medical advice to delay resuming his own in-ring action. Marty continues to produce compelling news and sports reports with Slam and as Editor of TheJ.ca.