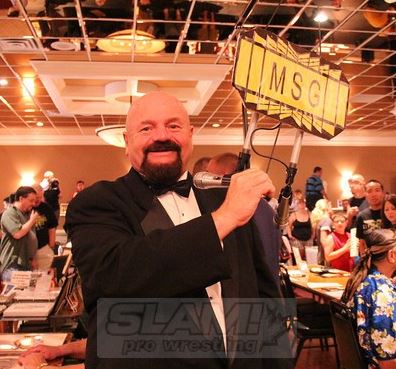 Howard Finkel and a replica Madison Square Garden microphone at a fan fest in 2013. Photo by Christine Coons

Legendary ring announcer Howard Finkel, who lasted through the years as WWWF became WWF and then WWE, has died. He was 69.

A few years back, “Fink” suffered a stroke. In 2016, he had surgery on a herniated disc on his lower back.

WWE.com broke the news on April 16, 2020, of Finkel’s death. “In what has already been a tough week for our @WWE family, today we lost our 1st ever employee and WWE Hall of Famer, @howardfinkel. Howard’s voice is iconic & recognized by generations of fans. He will be missed. #RIPHowardFinkel Thank you for everything,” tweeted Stephanie McMahon.

Besides his long tenure as a ring announcer, he was respected as a knowledgeable historian, particularly about the company he had been with since 1977.

“Howard is a walking encyclopedia. He will give you the date and the match 30 years ago,” recalled Los Angeles office worker Jeff Walton, who spent some time publishing the early WWF magazines.

Author Kevin Sullivan noted in 2010 that when he wrote the WWE Championship book that Finkel was the first person he sought out to interview. “I went directly to the walking sports-entertainment encyclopedia,” wrote Sullivan (not the wrestler) in a blog post. “I knew that The Fink’s wealth of knowledge would kick me off in the right direction.”

While he had worked for the company prior, Finkel considered his real WWWF debut to be on January 17, 1977, at Madison Square Garden, with Bruno Sammartino facing Ken Patera in the main event. “The Garden is the Garden,” Finkel told Elizabeth Kim of the Stamford Advocate in 2009. “You haven’t made it until you’ve made it to the Garden.”

A native of Newark, New Jersey, Finkel was working as an usher at the New Haven Coliseum when Vince McMahon Jr. met him. By 1979, he was a full-time employee, and when McMahon Jr., bought out his father and his partners to establish the WWF, Finkel was employee number one.

He was a regular for Titan Sports, in its various names, until the age of 49, when he was moved from his ring announcing position, and took a regular job at the head office. Dave Meltzer of the Wrestling Observer Newsletter noted that Finkel “was put out to pasture for apparently cosmetic reasons at the age of 49, when he had several decades of great work left in the tank.” At the head office, Finkel helped just about everywhere, from working with high schools to run fundraisers with WWWF shows, to decades later, writing for WWE.com.

He was always happy to offer advice too, noted WWE’s Renee Young on her Instagram. “Howard always had so many kind words of encouragement for me when I first started working with @wwe it was a pleasure to know him.”

It didn’t matter whether you were a big star or not, noted Atlantic Canada promoter David Boyce on Facebook. “Met him a few times and talked about ring announcing. His biggest tip, in his opinion, for me was to announce the title match like it was the most important title ever, no matter what title it was or how many people were in the audience.”

On camera, Finkel would be brought out for special occasions, including announcing for CM Punk, and was inducted into the WWE Hall of Fame in 2009. “I thought I made a difference but I was just a spoke in the wheel,” he said at the ceremony.

The greatest match of his career — and only match — was a Tuxedo match against Harvey Whippleman in 1995.

Asked about his greatest moment on R.A.W. Radio by hosts Arda Ocal and Jimmy Korderas, Finkel went back to 1987. “Personally, WrestleMania 3, Pontiac Silverdome, 1987. To stand in the middle of the ring and look around at 93,173 people looking down at us — myself, and the WWF superstars, that was the greatest moment for me. And just to know all those people were there to have a good time and I had to perform — to ring annonounce — for those people . . . that’ll never happen again. I don’t think I’ll ever work in front of crowds that huge — that ‘landmarkish’ — ever again. I was absolutely filled with pride for Vince (McMahon) on that day.”

“Howard Finkel is WWE’s Michael Buffer,” said announcer Joey Styles in the Stamford Advocate piece. “When any WWE superstar or WWE fan imagines winning the WWE championship, the voice in their head making the official announcement is Howard Finkel.”

He appeared at countless fan fests across North America, happy to chat with fans, a smile always on his face. He also loved rock’n’roll and the New York Jets.

Since so many had seen Finkel at key moments in WWE history, from WrestleManias to SummerSlams, and everything in between, he was a revered figure. He wrote a column at WWE.com upon Edge’s retirement, and noted that, “here in my office at wwe.com I have an action figure of Edge that he signed with the following inscription: ‘To the Mighty Fink… Truly one of a kind!'”