Review: We can still learn plenty from André the Giant

Hands down one of the saddest quotes this writer/reader has ever read is when André Roussimoff, better known to the world as the late André the Giant, told his friend Tim White, “If I could take your place for a week, I would give you everything I had.”

But the harsh reality is that we live in a world full of dichotomies. For if André was indeed “normal,” we wouldn’t still be discussing his life and legacy 27 years after his death. And books like The Eighth Wonder of the World: The True Story of André the Giant, out April 14 from ECW Press, wouldn’t exist.

While André was in fact a giant, his life was far from a fairy tale and authors Bertrand Hébert and Pat Laprade have done a fearless and commendably thorough job exploring this truth and all the other facets of Andrés’ life. The two, who have also been SLAM! Wrestling contributors, also co-authored Mad Dogs, Midgets and Screw Jobs: The Untold Story of how Montreal Shaped the World of Wrestling and Mad Dog: The Maurice Vachon Story. In addition, Hébert co-wrote Pat Patterson’s biography, Accepted: How the First Gay Superstar Changed WWE with Patterson. Laprade worked as a field producer for 2018’s HBO documentary André the Giant and co-authored Sisterhood of the Squared Circle: The History and Rise of Women’s Wrestling with Dan Murphy. With French being the first language for both Hébert and Laprade, Tony Stabile took on the role of reviewing the text and ensuring that it was written in proper English, but he did not create any of the content.

Beginning with a brief, but heartfelt foreword by WWE Hall of Famer Stan Hansen, readers are taken on what has to be dubbed “the definitive journey of André’s life.” Along the way both family and friends of André pipe in to share their memories and perspectives. The authors are also dedicated to filling in any gaps the readers may have when it comes to pro wrestling including the history of wrestling in locales like France, Japan and Montreal, and discussing wrestling’s ample cast of characters. I’m someone who appreciates oodles of research and I’m admittedly nosy by nature and want to know everything, so I welcomed this plethora of information. But saying that, I still have to recognize that this excess of wrestling minutia may be a lot for some readers to absorb. 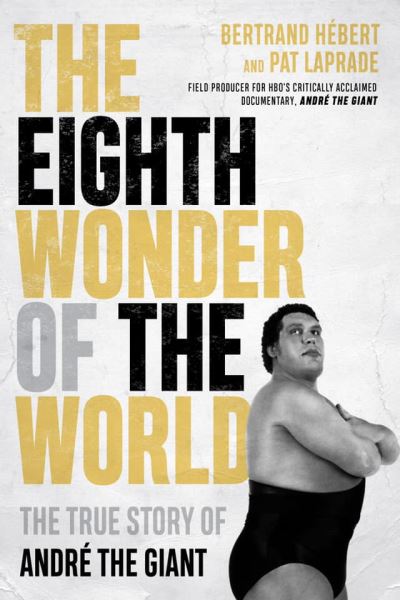 It should be pointed out, that in addition to their prose, the authors have procured plenty of photos to break up the text. With over 100 photos, readers will be treated to classic photos and some gems that they have most likely never seen before. The impressive collection of photos includes his early days courtesy of the personal collections of André’s family members, candid moments, his days wrestling all over the globe and his time in the WWF.

While, I could say this André bio is a “warts and all” portrait, perhaps farts and all may be more apropos. Yes, brace yourselves, they go there and further. Unlike traditional biographies, we don’t just get a chronological recollection of André’s life, but we also get a fascinating array of discussions that range from his aforementioned and apparently famous flatulence to the curiosity surrounding the size of André’s genitalia to his lust for life and the ladies and even an entire chapter on acromegaly, the hormonal disorder responsible for André’s immense size.

Readers that have been left with any lingering André questions since his death can be sure to get their answers or in some cases closer to the answers as possible from the book. The authors valiantly tackle the plethora of mythology surrounding André from how tall he really was, spoiler they conclude he was “a real seven-footer,” to the larger than life stories surrounding his penchant for alcohol consumption. For myself, and this is embarrassingly morbid, but I always wondered how Andrés’ body was removed from the Paris hotel room in which he died alone. The book reveals that to avoid the spectacle of using some kind of machinery to get him out the room’s balcony, André’s arm was broken so he could have a more discreet and dignified exit through the room’s door.

While always striving to provide the facts, the authors forgo frustration at dead ends and instead embrace the realization that in some instances we will just never know what is fact and what is fiction when it comes to André due to a variety of factors including kayfabe, protecting the secrets of the pro wrestling business, and not having the technological advances we have today. I encourage readers to take the same approach because let’s face it, pro wrestling is just not a business known for its forthright honesty.

Even with Laprade’s involvement in the acclaimed HBO documentary about André, the book doesn’t shy away from things that film or what other pieces on André got wrong either. Most notably, the documentary presents André as having an essential back surgery after filming The Princess Bride and before WrestleMania III. Vince McMahon even says in the film that the timing was a means of giving André something to live for. Through their research, the authors reveal that the operation in fact took place months after WrestleMania III. I can’t speak for everyone, but, in my home, all subsequent viewings of André passing the torch to Hulk Hogan in this main event will be looked at with a newfound appreciation and also sadness. I can’t even fathom the amount of physical pain André must have been in just to entertain us and propel professional wrestling forward.

I’d be remiss not to note that this book is being released during a time when the world is at a standstill. We’re in an unprecedented time when we are encouraged to stay at home and flatten the curve of the spread of COVID-19. It’s this current experience and the seemingly small details about André’s life, ones that may not seem impactful to some, that have me better appreciating the sacrifices André made for pro wrestling and at the same time giving me the perspective that I should be grateful for everything that I have. Earlier this year, and in hindsight this is going to come across as extremely pathetic and selfish, but I was upset about my first trip to Disneyland being cancelled. After reading this book, I learned that André got to visit Disneyland, but couldn’t go on any of the roller coasters and I’m assuming the other rides as well. Upon my trip’s cancellation, I remember lamenting about there being so many places I haven’t had the opportunity to travel to. Again, from the book, André was able to travel the world, but he couldn’t fit into an airplane bathroom.André’s legacy will continue to live on and grow because we, and frankly I, still have a lot to learn from him.

He concluded, “I live day to day, and I don’t think about the future. You may never know what might happen tomorrow.”