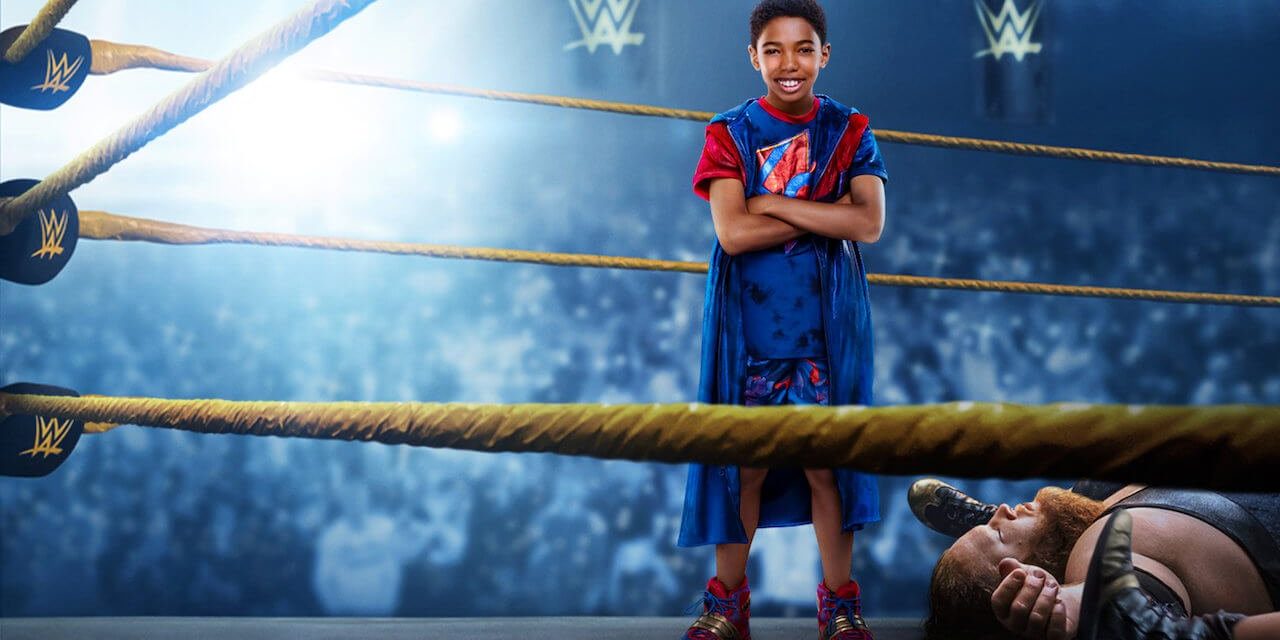 The WWE did not invent self-promotion, but it sure does it as well or better than anyone else. In the new Netflix / WWE Studios production The Main Event, a boy who loves wrestling, living with his family that loves wrestling, spends time with his friends who love wrestling and stumbles into a chance to fulfill his dreams of … wrestling.

Is it a movie? Is it an infomercial? It’s a bit of both.

The young boy in question is Leo, played by Seth Carr, whose career has already seen him with parts in big movies such as Terminator: Genisys and Black Panther. The rest of the cast is sprinkled with so many WWE wrestlers that it’s pointless to list them all here, but there are a few that are featured prominently. 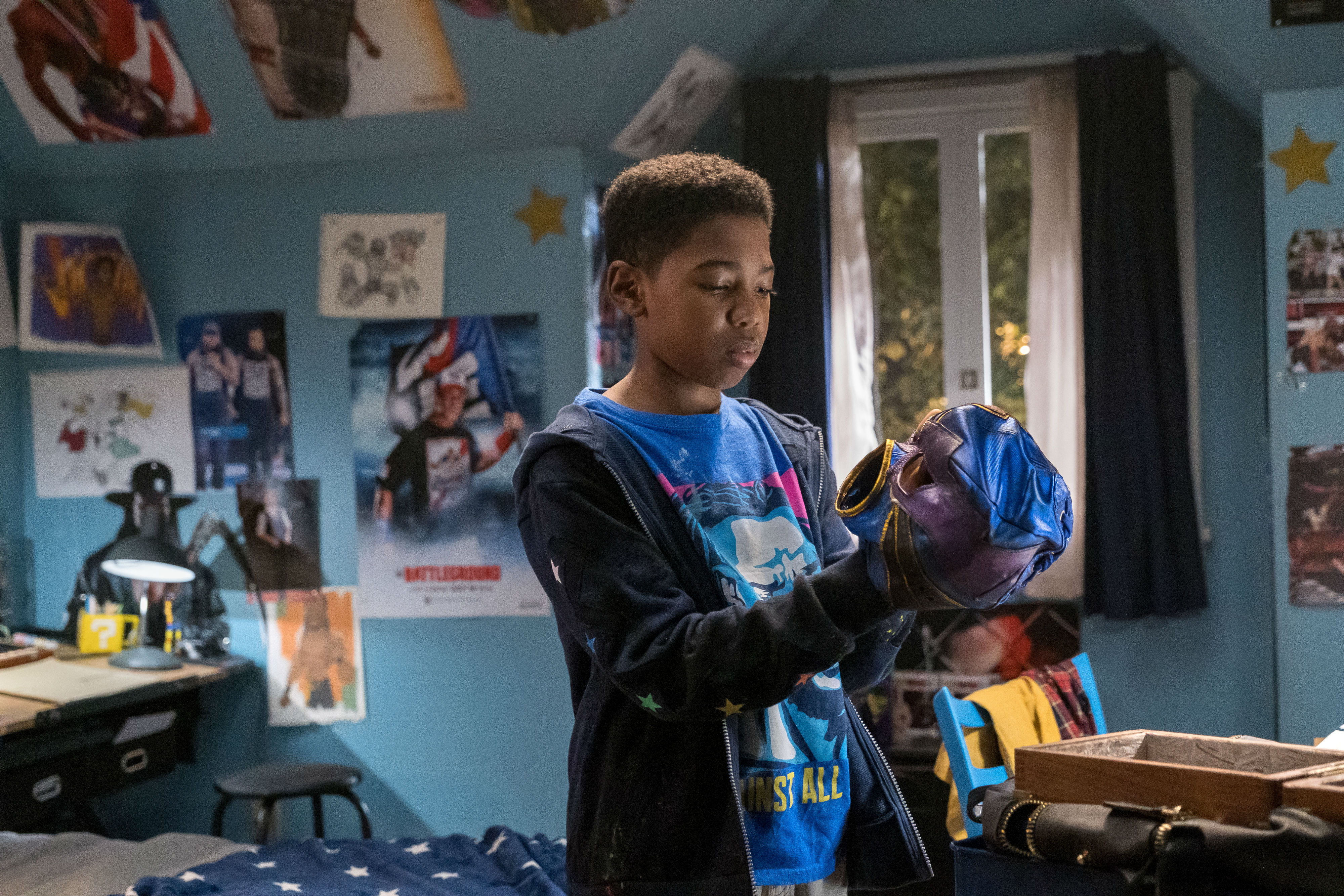 Carr as Leo with his newfound piece of mysterious merch

The film opens with Leo facing off against The Miz in a dream sequence, before being woken for school by his Grandma, played by Tichina Arnold, wearing a John Cena shirt. Leo’s room is adorned with tons of WWE merchandise. Throughout the film, he is also seen to own an excessive number of shirts. It’s all probably more than should be considered healthy.

Adam Pally plays Leo’s father Steve, single and working two jobs. We learn that the mom has left Leo and Steve, though her mother has chosen to stick with them to help them out. Steve is hopeful of getting better employment to help pay off his significant debt. Leo overhears this and feels bad about his dad’s economic woes.

Perhaps he could sell off his swag? Regardless, an opportunity will soon present itself.

At school an innocent enough chain of events starts the plot rolling. Leo is chased after school by the local bullies (demonstrating how not to Be a Star) and he hides out in a house that’s either hosting a showing or an estate sale. He ends up finding a room filled with wrestling memorabilia, including a really old looking mask.

Back at home, Grandma (now in a New Day shirt) is watching Monday Night Raw with Leo; he wants to talk about the happenings with his dad, but Steve just wants to change the subject as it revolves around the mom. The big announcement of the show has The Miz inviting dreamers to an NXT tryout in Leo’s hometown to obtain a contract and a cash prize.

As Leo has discovered that putting on the mask grants him super-strength, super agility, super speed, and super confidence, he’s super ready to get himself into that tournament.

With hopefuls played by an assortment of characters, featuring Keith Lee, Otis Dozovic, Mia Yim, and especially Babatunde Aiyegbusi (who is a monster managed by Frankie, played by Ken Marino), Leo (now going by Kid Chaos) is so ridiculously head and shoulders above every other competitor that there shouldn’t even be a competition after his first performance.

The saving grace of this film should be the wrestling scenes. However, if you’ve ever wondered what it might be like if the WWE went to town with special effect stunts in the production of a match, here’s your chance to see it. Not much in these matches resembles an authentic wrestling match, which is saying something as wrestling matches have a tenuous hold on authenticity as it is.

Suffering from the same problem in almost every wrestling movie, the matches are treated as unscripted. That, plus Leo’s superhuman athletics, makes for an irreconcilable combination. If there’s a point where the ludicrousness eclipses all semblance of believability, it is definitely when Kid Chaos must contend with what seems to be Dozovic’s signature move. 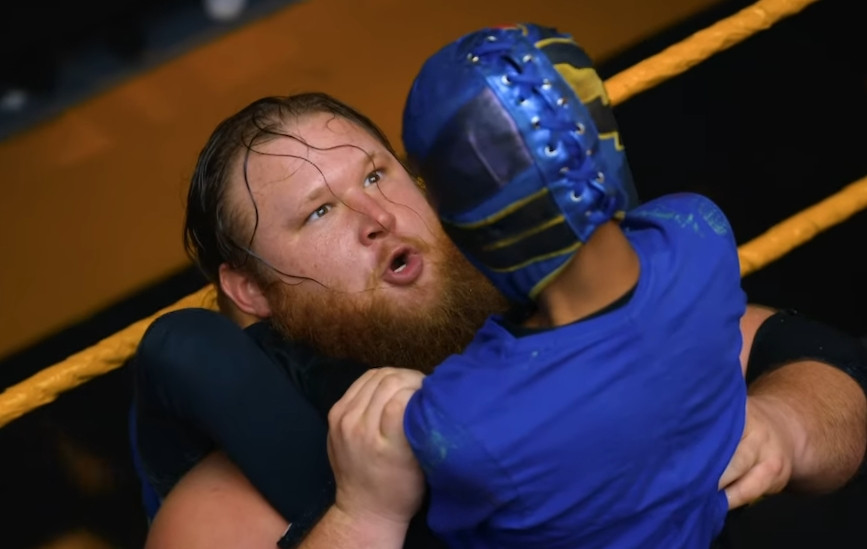 Otis in tough against Kid Chaos

As the wrestler named Stinkface, he tries to win the match by unleashing a fart. An unbelievable fart, mind you; one that creates ripples in the air like bullets in The Matrix and pummels audience members with its airborne force.

Hard to come back from a sequence like that.

Leo starts finding other uses for his magical mask, such as finding the courage to talk to his crush — but not face to face, of course, which necessitates all sorts of awkward positioning to speak to her without being seen.

Leo’s next move is to merge his Kid Chaos persona with his real life while he and his friends are hanging out at the soda shoppe. Seriously, like it’s 1950. Well, in bursts an unmasked would-be robber in the middle of the day, but he’s stopped by Leo after he reveals his double-life to his friends and stops the bad guy.

I’d like to think that a moment where Leo sends the crook flying across the bar is in tribute to wrestler/actor Pepper Martin’s turn as a bully in Superman II, but, that’s probably a bit optimistic.

Arnold, Pally, and especially Marino hold up their end as well as they can in this film — especially when Marino as Frankie peels back the incredible layer-upon-layer mystery of Kid Chaos and discovering that he’s actually … a kid. That was apparently over everyone’s head. He hatches a plan to derail the seemingly inevitable ascension of Kid Chaos, one that will put Leo’s true character to test.

Look, no matter the circumstance, no movie deserves to have the final act’s details spoiled, so all you need to know is that the movie dives somehow even further into implausibility as it wraps everything up.

The Main Event will please die-hard wrestling fans in the same way that No Holds Barred pleased wrestling fans in 1980s. That is to say, if all you want is to see some of the wrestlers you know hamming it up as semi-recognizable versions of themselves, go for it. If you’re looking for anything more, then I’d suggest you look elsewhere.

There is, of course, the great modern movie-going caveat: it’s on Netflix, so it’s practically free.

It will only cost you time.

While barely offering up much more than self-promotion, this WWE production substitutes stiff characters and sales pitches for story at almost every opportunity.