WWE HeroClix is worth the price of admission 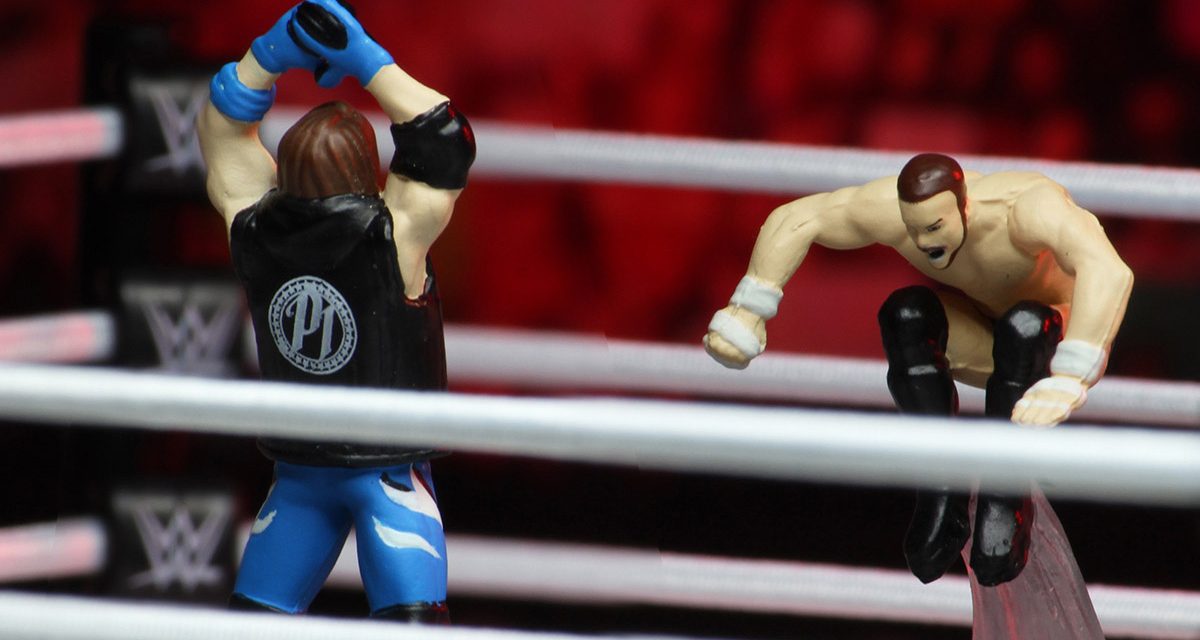 It used to be that only Marvel and DC superheroes, Star Trek, The Teenage Mutant Ninja Turtles and a few select others could do battle in the HeroClix system. That has all changed though with the arrival of the WWE and its superstars.

WWE HeroClix features current superstars like AJ Styles, Finn Balor, Roman Reigns, Asuka and wrestling icons such as Ric Flair, Eddie Guerrero, The Undertaker, Kane and Andre The Giant. Each character comes with a HeroClix figure as well as their character card which details their specific and unique abilities.

The figures themselves are incredibly intricate, detailed and worth collecting on their own even if you don’t play a single game of HeroClix. Kane’s figure has fire and brimstone raging behind him. Triple H is breathing his pre-match mist from his mouth. Fireworks explode behind Shawn Michaels as he poses in the middle of the ring.

The game itself takes a bit of getting used to though. The more you play, the more it will all make sense. The objective is beyond simple: Two sides battle each other with the last person, character(s) standing being the winner(s).

Game play consists of players taking turns moving their characters around the map, game environment and attacking their opponents in various ways. Rolling a pair of six-sided dice determines whether an attack is successful or not. Damage is calculated by turning a dial on the bottom of each figure — hence the “click” or “Clix” in HeroClix. When the dial reaches KO, then that character is defeated, knocked out. 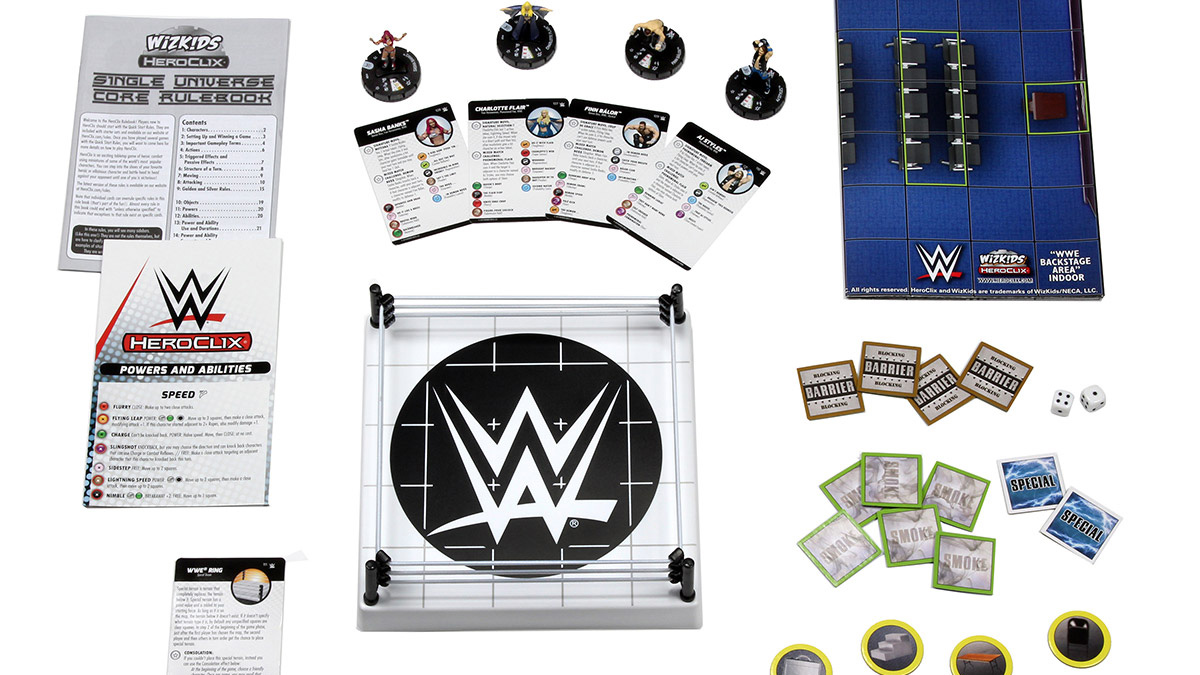 The matches or skirmishes aren’t as simple as that though, as each character has special attacks and defenses. For example, The Undertaker cannot be knocked back and can rise from defeated status. AJ Styles’ Phenomenal Forearm prevents a character from moving or using their attack powers until their next turn.

It is these passive, active abilities that give the WWE version of HeroClix its uniqueness but they also complicate the combat. You will be assuredly referring to the character cards again and again until you have committed the abilities to memory.

The only thing that kinda drags the game play down is that you have to move through the environment. That does slow the momentum, unless you start the combatants in the ring at the very start, of course.

Depending on which set you have, you will get different settings, the maps, to play on. There is a normal arena complete with a plastic WWE ring and fabric, elastic ropes. There is a backstage area complete with parking lot. War Games has its own map and there is a WWE training area you can wage war in as well. There are also tokens representing steel chairs, tables, etc., that can picked up and used as weapons against your opponents inflicting extra damage.

There are two starter sets available at present. The Mix Match Challenge Starter Set costs approximately $50 in Canada. It comes with Charlotte Flair, Sasha Banks, Finn Bálor and AJ Styles as well as Powers and Abilities cards, HeroClix rules, tokens, a map, dice and the WWE ring described above. 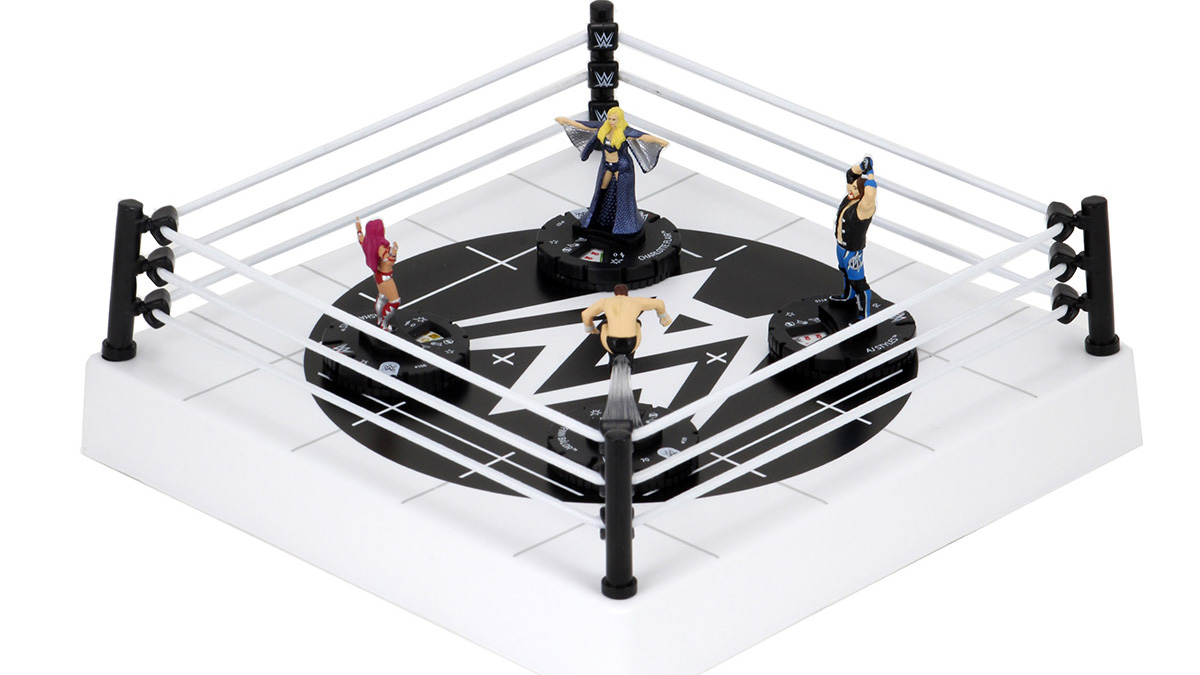 The Rock and Sock Starter Set comes with the same accessories minus the ring. The characters included with that set are The Rock, Mankind, Stone Cold Steve Austin, Triple H, Ric Flair and Shawn Michaels. It is approximately $32.

To collect and play HeroClix of any variety is not a cheap proposition for sure. With WWE HeroClix though, The Rock and Sock Starter Set is a good deal considering all that you get for your hard-earned money. You don’t have to invest a lot of dough to see if the game is right for you especially gamers looking to expand their wrestling simulation game play beyond video games and RPGs.

Although it cause certainly damage your wallet. HeroClix is worth it as a game and a collectible.