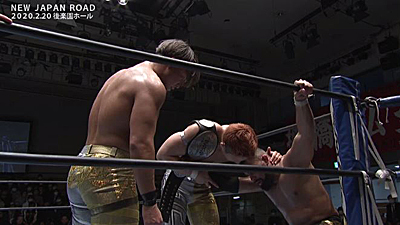 The students have become the masters.

Try as they might, Mega Coaches Rocky Romero and Ryusuke Taguchi could not defeat IWGP Junior Heavyweight Tag Team Champions Sho and Yoh.

In the first title match of night one of NJPW’s New Japan Road, The Mega Coaches took on the team Romero helped put together and manages.

Things got a little nasty as Yoh and Romero traded slaps in the middle of the ring. A Tornado DDT from Romeo stalled Yoh’s momentum. Taguchi unleashed a flurry of hip attacks on Sho and Yoh as well as a tope on the arena floor.

Romero gave Yoh a Falcon Arrow then transitioned into an arm lock while Taguchi slapped on his ankle lock on Sho. Sho and Yoh reversed the holds seconds later. All four men then swapped haymakers in the centre of the ring.

A double Code Breaker would have put Sho away but Yoh made the save just in the nick of time. Taguchi stopped a 3K on Romero wailing on Sho and Yoh with chops and forearm smashes.

Romero countered Shock Arrow coming within a half count of pinning Sho. Sho caught Romero’s running knee strike and he and Yoh delivered the 3K. Taguchi made another critical save.

Yoh accidentally kicked Sho as he went to super kick Taguchi. Now it was Yoh’s turn to save Sho from being pinned. Yoh wiped out Taguchi on the floor so that Sho could spike Romero with Shock Arrow. Romero kicked out to the thrill of the fans who were clearly on his side since the bell rang to start the match. Sho and Yon finally put away Romero with Strong X from the top rope.

The Mega Coaches weren’t the only challengers to miss the mark. Tomohiro Ishii fell flat in his pursuit of Shingo Takagi’s NEVER Openweight Championship.

In a relentlessly intense match Takagi defeated Ishii but it took two Pumping Bomber Clotheslines and a Last of the Dragon to do so.

Uemura weathers Kanemaru’s Boston Crab but is pinned by Deep Impact. Suzuki teases giving Uemura a Gotch Piledriver then decides to just drop him to the canvass.

Yano punches Honma in the “lower abdomen” so that Cabana can put him away with the Superman Pin.

Kojima pinned Evil with the Lariat.

The official relieves Jado of his keno stick. Robinson hits Jado with the Left Hand of God. Gedo distracts the official so that Tama can clock Robinson in the head with one of the tag belts. Tanga pins Robinson. Tanga then hits Tanahashi and Ibushi with the belt too. Loa hits Ape S—t on Ibushi while Tama hits Gun Stun on Tanahashi. Kota Ibushi and Hiroshi Tanahashi challenge Tanga Loa and Tama Tonga for the IWGP Tag Team Championships tomorrow night.