Guest column: How can Steve Gillespie be gone?

By STEVE RIVERS – For SLAM! Wrestling

It was January 3, 2020. I was wrestling in a tag team match for RCW in Calgary. While standing in my corner watching the action in the ring I heard a voice directly behind me. 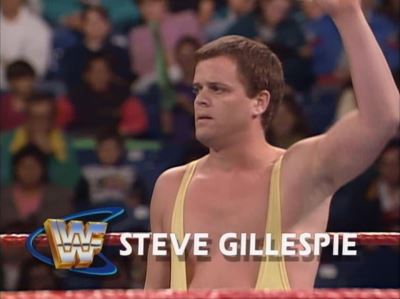 Thinking it must be a fan yelling at me I didn’t look back.

Then it came again.

Now the voice sounded familiar. I looked back and there was Steve Gillespie who made his way through the hundreds of people in the packed Legion to the barricade outside my corner.

Gillespie yelled, “I’m sitting in the back corner, come see for a beer when you are done.”

I gave him a thumbs up and a smile and continued my match. The front rows of the crowd kind of chuckled that I was making beer plans in the middle of my tag match.

After my bout, I geared down and threw on my clothes and waded through the audience to find Gillespie.

I sat there for the rest of the evening with Steve talking shop and reminiscing over our past wrestling days. Even though Gillespie had not been an active wrestler for many years, he was just as passionate and excited about the business as when I first met him. Gillespie had major heart surgery several months previously and it was a rough recovery. Despite those challenges, he appeared to be in great spirits and doing very well. He talked of the future and was excited about training students again. Before he left, I gave him a hug and told him I would be in touch soon about coming down to work with some of his students. It was a great visit with an old friend

Two weeks later, on January 18, 2020, I received the heartbreaking news that Steve Gillepsie had passed away that morning. He was 56.

I was in shock, disbelief and saddened by this traumatic news. How was this possible? I was just with him and he was fine? So many questions. So many thoughts. It had been a tough several months for the Calgary wrestling community. Rick Titan (Bognar) had just passed away and now Gillespie’s passing added to our already still grieving wrestling family. It’s sure not easy losing our wrestling family members. Having back to back passing so close together, it feels like you don’t have time to properly recover from one before another is knocking on your door. Neither Rick nor Steve were very old which only adds to the already tragic nature of their deaths.

It always seems when a friend or colleague passes away you begin to reminisce and reflect all the time you had spent together.

I was no different, and began to think about how Steve Gillespie had always seemed to be around in my wrestling career. I have been wresting for 29 years and I don’t remember a time when Gillespie wasn’t around. 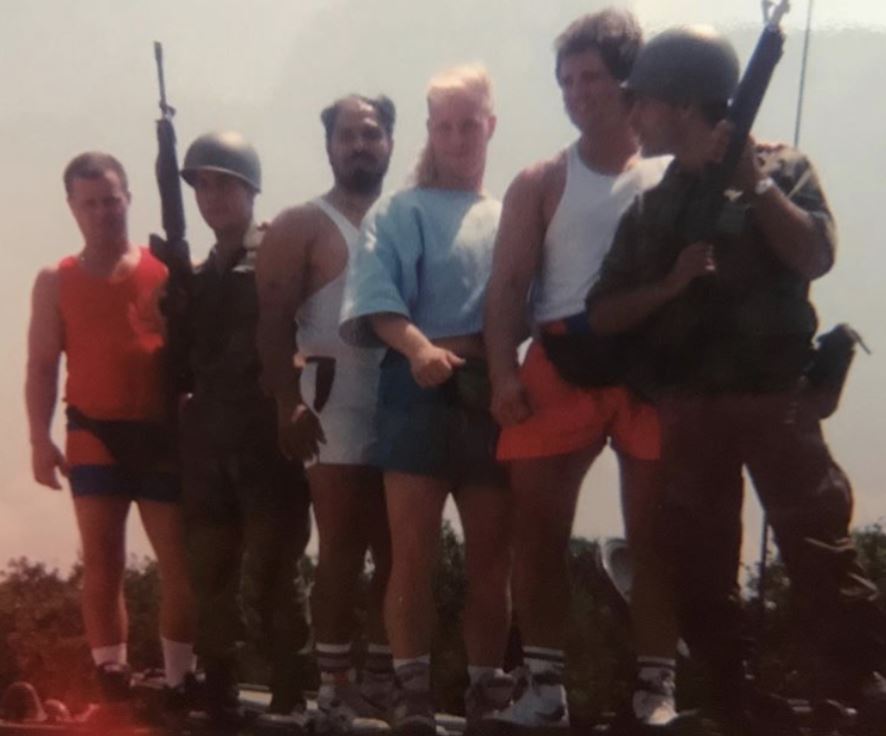 My first road trip with Gillespie was an overseas tour to Lebanon in August 1992. It was also both our first times wrestling overseas. We were accompanied by other Calgary wrestling legends Gama Singh, Gerry Morrow, and a young Lance Storm. Others on the tour included Chris Adams and brothers Mando and Chavo Guerrero.

Gillespie and I were roommates for some of the tour and were given a hotel room without a toilet seat. Days later, we would later find that seat in the Mediterranean ocean while we were swimming.

After that we did WWF shows together, followed by time in CRMW (Canadian Rocky Mountain Wrestling) together, and road trips out to Manitoba for Tony Condello, plus latter-day Stampede wrestling shows, and then in 1997, Gillepsie got into the promoting game with Can Am Wrestling.

Alongside with Otto Gentile and Steve Wilde the trio made Can Am Wrestling a touring company and kept many of the Calgary wrestlers busy with work for several years. Can Am had a great run and many memories and stories created along the way

Steve Gillespie was epileptic and had many seizures while on the road with Can Am Wrestling. It was so normal for us to watch him have a seizure in the middle of the floor in a restaurant or bar and pretend nothing was happening. People would be completely freaking out and we were all just laid back and relaxed, pretty much ignoring it and letting it run its course. Gillespie loved to tell people the story of how I pinned him in the middle of a restaurant while he was seizing for the Mid-heavyweight championship. I will not confirm or deny that I did this!

His seizures led him to get one of his several nicknames, including the decidedly politically-incorrect “Twitchy G.”

When Can Am finally shut its doors, Gillespie had transitioned out of being an active wrestler. Despite that he was still always around assisting in other ways, whether it be training students or helping assist in promoting, Gillespie was always part of something. He was always around the wrestling business in some form.

I think that’s what is going to be the hardest thing to for many of us who knew Gillespie to accept. Our friend who was always there in some capacity has passed on and won’t be there when we look around.

Steve Gillespie was a character! It is safe to say Gillespie made an impression on every wrestler and fan who saw him over the years. Everyone has Steve Gillespie stories. Although physically gone, Steve will live on through us. With our stories and our memories. And as long as we all have that to share, nobody is ever really truly gone.

Many years, many miles, many matches, many memories …

Then came January 27, 2020, when Steve Gillespie was laid to rest. Wrestlers from numerous generations and guys I haven’t seen in two decades ventured out to pay respects to our fallen friend at the funeral in Calgary.

The local wrestling circuit was well represented by wrestling legends and stars that made up the majority of people in attendance. We all really felt for his wife and kids, and grandkids.

As we all mingled and caught up and re-connected with each other, the common consensus was that we all need to stay in touch and get together more often.

The sad reality is that it seems it is always a tragedy’s such as Steve Gillespie’s passing that brings us together. Seldom anything else reunites us.

However, many of us all agreed to get together and reunite for a charity show hosted by RCW Real Canadian Wrestling for a Can-Am Wrestling retro night in honor of Steve Gillespie. The wrestlers will be donating their time and pay for a cause Gillespie was assisting with before his passing. Bruce Hart’s son, Rhett, who has cerebral palsy, is badly in need of a wheelchair accessible van.

Wrestlers who have not seen ring action in 20 years are going to lace them up one more time to assist in this fundraiser.

It’s what Steve Gillespie would have wanted so we all collectively wanted to honor that!

So on February 7th, there will plenty of jokes about old age, Ben Gay, and retirement homes, as RCW presents Can-Am wrestling retro night!

It will be a pleasure to share a locker room one more time with guys that have been long retired and will most likely never be in a ring again after that night.

Cherish these moments. Sometimes out of a tragedy a special occasion will occur. I see this show as that special moment. And for that, we have our departed friend to thank for this special day.

From all your wrestling family and friends …

Steve Rivers is a veteran of the western Canadian pro wrestling scene.