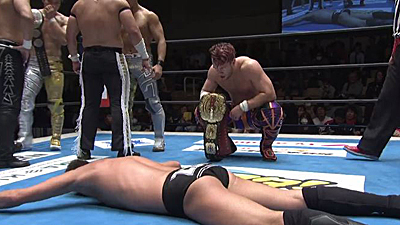 It was survival of the fittest on Night Three of the Road to NJPW New Beginning tour as Chaos (Sho, Yoh, Will Ospreay and Kazuchika Okada) clashed with Suzuki-gun (Yoshinobu Kanemaru, El Desperado, Zack Sabre Jr. and Taichi) in a special elimination match.

In these unique NJPW tag team bouts, wrestlers are eliminated when they are pinned, submitted or thrown over the top rope with both feet touching the floor. The match continues until one team is completely eliminated.

Everything scatters to the wind about five minutes in as Sabre Jr. and Ospreay take their fight to the floor. Taichi follows suit nailing Okada in the throat with a steel chair, ramming him into a steel post and tying him to the post with a microphone cable.

In a stunner, the Chaos leader was knocked out first when Taichi backdropped Okada to the ring apron. Taichi kicked Okada off the apron to the floor.

Just minutes later, Sho gave Taichi a sliding drop kick sending him off the apron and to the floor too. This left rival tag teams Roppongi 3K and Yoshinobu Kanemaru, El Desperado to fight it out in the ring as Sabre Jr. and Ospreay were tied up on floor.

Kanemaru spit whiskey into Sho’s eyes so he could super kick him out of the ring. While Ospreay lay dazed on the apron, Yoh fought both Desperado and Kanemaru.

Kanemaru picked up the whiskey bottle, shoving referee Red Shoes out of the way. Yoh kicked the bottle out of Kanemaru’s hands and pitched him over the top rope. Seconds later, Yoh side-stepped Desperado sending him over the ropes to the floor. However, a distracted Red Shoes did not see the elimination so Desperado continued on in the match as fans booed. Entangled while trying to out-wrestle each other, Yoh and Desperado went over the top rope and fell to the floor eliminating each other.

Will Ospreay and Zack Sabre Jr. traded forearm smashes and chops as the sole survivors for their respective teams. Ospreay would cement the win for Chaos by pinning Sabre Jr., the RPW British Heavyweight Champion, with Stormbreaker.

A shoving match between Yoshinobu Kanemaru and El Desperado erupted after the bell while Ospreay taunted Zack Sabre Jr. with the RPW British Heavyweight Championship and Okada, Taichi engaged in some trash-talking.

High Stakes takes place on Valentine’s Day at York Hall in London, England.
…
In other matches:

Kidd gives Taguchi a run for his money but there is no beating the veteran Funky Weapon. Kidd submits to the Ankle Lock.

Ishimori offers his hand but pulls it away. Uemura responds with a drop kick. Like the previous match, Uemura cannot overcome the experience of a certified pro. Uemura submits to the S Lock.

Henare continues to impress. The powerhouse needs a push, NJPW. Makabe forces Tsuji to submit to the Boston Crab.

Suzuki-gun jumps the faces. Nakanishi fights back throwing Suzuki into the steel barricade. Suzuki batters Nakanishi with a table. Suzuki attempts to bring in a steel chair. Nakanishi blocks him. Douki tries to use his steel pipe. Tenzan blocks him. Tenzan makes Douki submit. Suzuki grabs a steel chair and wails on the Young Lions. Tenzan leads a chant for Nakanishi, who is retiring later this month.

Evil and Ishii are not finished with their feud yet. They start things off by bashing each other senseless. Things get worse for Ishii when Shingo gets a hold of him. Ishii pounds Shingo down, shoves the official out of the way. Hiromu turns Eagles’ Ron Miller Special into a roll-up.

Bushi proves to be the weak link as Kenta sends him to Dreamland with Go To Sleep.