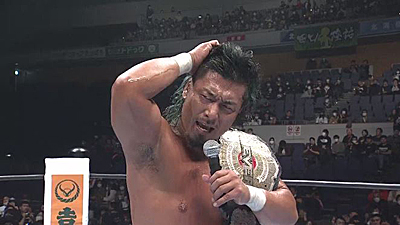 NEVER Openweight Title Match: Shingo Takagi defeated Hirooki Goto. At the beginning of the match, both men delivered shoulder blocks and neither man went down. They exchanged forearms with neither man going down. Goto had more speed in this match, probably due to his weight loss. Shingo clotheslined Goto in the corner of the ring to take the advantage in the match. Shingo delivered a second clothesline to send Goto over the top rope and Shingo followed Goto outside to continue the beating. Shingo whipped Goto into the guard rail.

Phantasmo applied a headlock on Uemura and delivered repeated shoulder blocks to eventually knock Uemura down. Phantasmo jumped off the top rope to deliver the frog rake, which is a comical move where Phantasmo lands on his feet and rakes the back of Uemura. Uemura locked in a Boston Crab on Phantasmo who escaped. Ishimori locked in the Cross Face on Uemura who tapped out.
…
Toa Henare, Togi Makabe & Tomoaki Honma beat Hiroyoshi Tenzan, Manabu Nakanishi & Yota Tsuji

Nakanishi overpowered Henare by pushing him into the ropes. Henare hit the ropes and attempted a jumping shoulder tackle but Henare bounced off Nakanishi. Makabe was tagged into the match and he worked over Nakanishi’s leg. Tsuji locked in a Boston Crab on Henare who was able to grab the rope to force the break. Henare hit the Toa Bomb on Tsuji for the win via pin fall. CHAOS (SHO, Will Ospreay & YOH) & Ryusuke Taguchi defeated Suzuki-gun (DOUKI, El Desperado, Yoshinobu Kanemaru & Zack Sabre Jr.). All men started the match off by brawling in the ring and it quickly spilled to the outside of the ring. When the match returned to the ring SHO and YOH doubled teamed El Desperado. Sabre Jr. and Ospreay brawled in the aisle way. All the members of Suzuki-gun in the match teamed up to dominate SHO. Taguchi hit the Dodon on DOUKI for the win via pin fall.
…
Robbie Eagles & Ryu Lee beat Los Ingobernables de Japon (BUSHI & Hiromu Takahashi)

Ryu and Hiromu exchanged chops to start the match off. Ryu and Hiromu brawled down the aisle way. BUSHI chopped Eagles in the ring. Hiromu returned to the ring and continued to chop Eagles. Eagles attempted to make a comeback on both BUSHI and Hiromu with a series of kicks but Eagles was cut off by BUSHI. Eagles hit the Turbo Back Pack on BUSHI for a near fall. Eagles followed up with a leg lock and BUSHI submitted in the middle of the ring.
…
Bullet Club (Jay White & KENTA) defeated Los Ingobernables de Japon (SANADA & Tetsuya Naito)

Naito and White stared each other down in the ring and White tagged out to allow KENTA to start the match. KENTA almost locked up with Naito but then rolled out of the ring. Naito held the ropes open for KENTA and KENTA entered the ring. Both men brawled in the ring and Naito rolled out of the ring. All men brawled outside of the ring. White dominated SANADA and hit a blade buster for a near fall. Gedo hit SANADA with a chair and White rolled SANADA up and held the tights to get the win.
…
Suzuki-gun (Minoru Suzuki & Taichi) beat Jon Moxley & Kazuchika Okada

All men brawled to start the match. Suzuki dared Moxley to “come on.” Moxley delivered a series of punches and Suzuki laughed in Moxley’s face. Moxley delivered another series of punches and eventually knocked Suzuki off his feet. Moxley gave a double middle finger to Suzuki and Suzuki grabbed those middle fingers and twisted them. Okada attempted a rainmaker but Sabre Jr. ran into the ring and locked in a sleeper hold on Okada. The referee called for the bell and awarded the match to Suzuki-gun. Taichi delivered a Black Mephisto on Okada on the ramp after the match. Taichi and Okada are scheduled to face off tomorrow. Taichi grabbed the microphone and said he will beat Okada tomorrow.
…
Tomohiro Ishii defeated Evil

Evil started the match off with a quick kick and then both men delivered shoulder tackles to each other with neither man going down. Evil eventually took Ishii off his feet and the match spilled to the outside of the ring. Ishii got a chair and hit Evil with the chair. However, Evil returned with a big punch into the chair, which hit Ishii. Ishii hit Evil with a stiff kick and clothesline for a near fall. Ishii hit another clothesline for a near fall and followed up with a brain buster on Evil for the win via pin fall. Don Davies is a life-long wrestling fan of 30 years that has enjoyed many eras from multiple promotions around the world.