Meet the tattoo artist who brought The Fiend to life

The slow, direct “biblical grandiose” of Bray Wyatt as he emerged on WWE programming in 2014 drew Kyle Scarborough back into the world of wrestling.

“I started tuning in just to watch the [Wyatt Family] vignettes… He was the one thing that kept me interested in wrestling,” said Scarborough, who, just a few years later, would help bring Wyatt’s current iteration — The Fiend — to life. 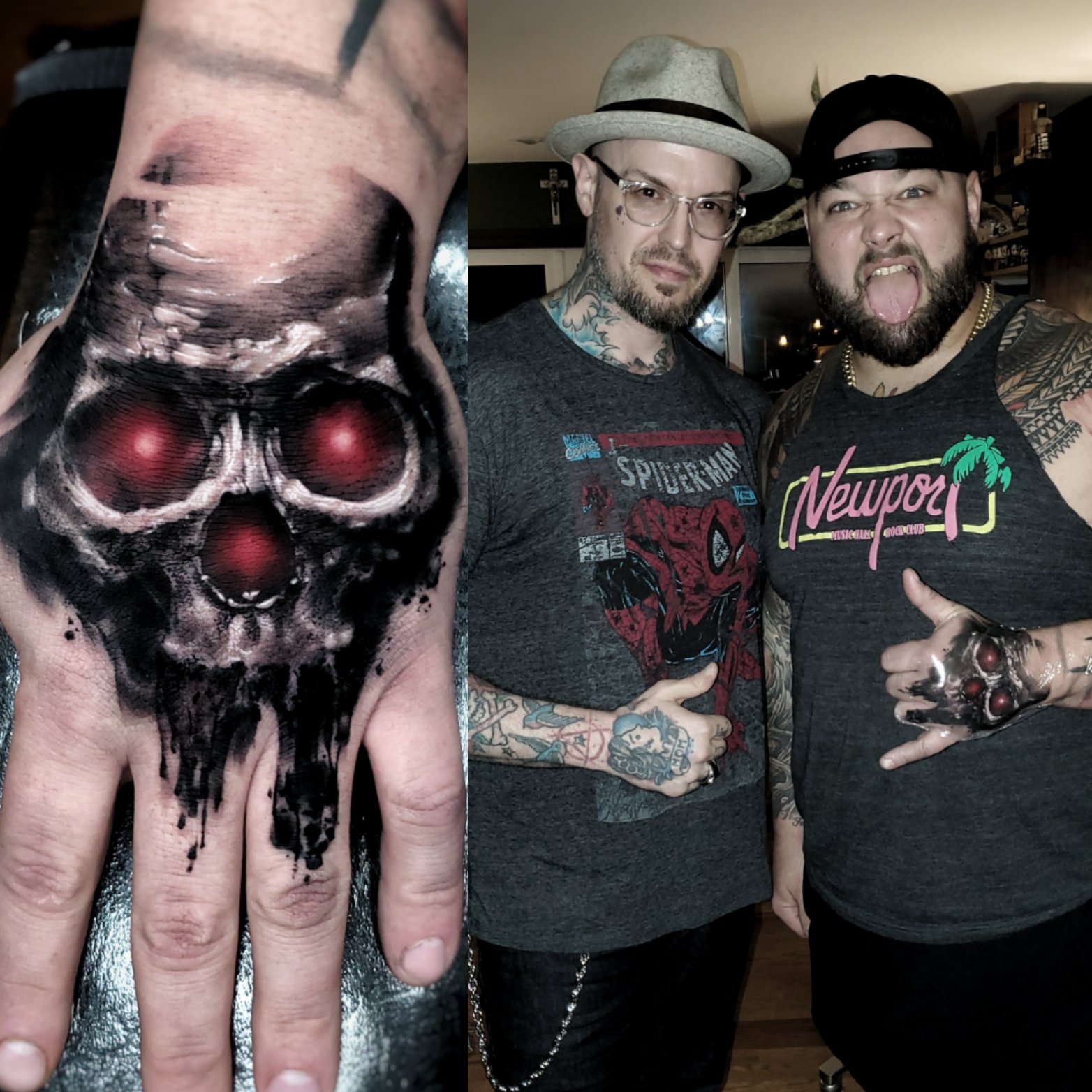 Kyle Scarborough with Bray Wyatt, and the tattoo that Kyle created.

A self-proclaimed shameless plug on Twitter from Scarborough, suggesting that Wyatt and NXT UK’s Tyler Bate get some ink at Scarborough’s Washington, Mo., tattoo shop, started it all. Bate publicly responded, and Wyatt followed suit.

“The next thing I know, I had a text message from [Wyatt],” said Scarborough, owner of The Washington Tattoo Collective.

Wyatt and Scarborough tried coordinating a time for Wyatt to visit the shop, and though the initial timing was off for that project, they stayed in touch. Soon Wyatt contacted Scarborough about the mask for what would be known as The Fiend.

Around November 2018, Scarborough said, his phone “started getting flooded with random images, characters and references.”

“He went a mile a minute with this whole idea,” Scarborough said, “and that’s where it all started.”

Scarborough said he didn’t have much time to process the fact that Wyatt had chosen him as part of the team that took The Fiend from concept to reality.

“I was a fan already just as an onlooker, so this was pretty surreal,” Scarborough said.

But even as part of the team, Scarborough did not know the full scope of Wyatt’s plan.

“I was a cog in the wheel… I was enjoying it with a lot of the fans,” Scarborough said. 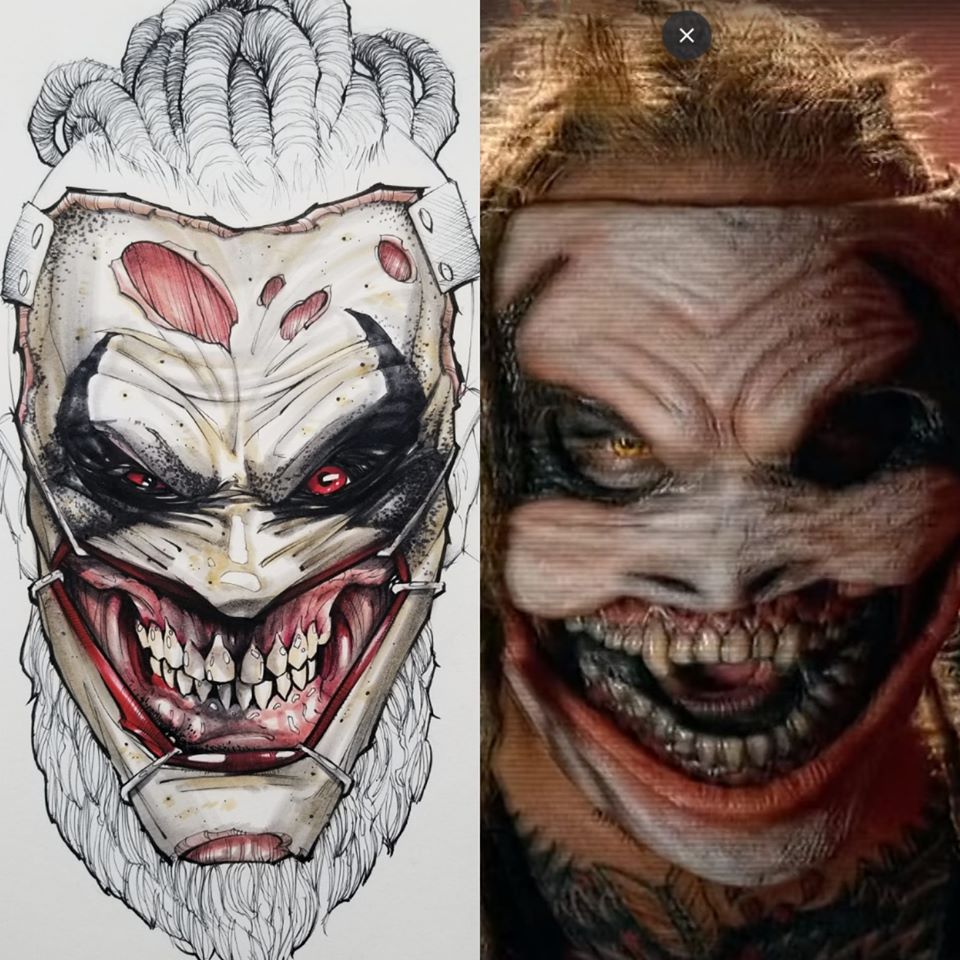 A sketch of The Fiend mask and the end result.

In their first conversation, Scarborough said, Wyatt had an idea that he needed a “visual representation” for and remembered Scarborough from their previous conversations.

One of the initial concepts Wyatt approached Scarborough with was near and dear to Scarborough himself — a mashup of the New 52 Joker, in which The Joker’s face is cut off and stretched, and the DC Comics character Lobo.

“My concept, my sketch is what made the rounds on the internet,” said Scarborough, a horror fan who, at one point, wanted to design movie monsters.

In addition to Scarborough, the team also consisted of effects artists Jason Baker and Tom Savini, who already had a working relationship with WWE.

Scarborough’s initial concepts evolved through the team’s collaborative effort, which is how Scarborough learned fangs would be incorporated into the character.

“People throw their artistic mind into it,” Scarborough said, “and it evolves into whatever it ultimately becomes.”

The conversations with Wyatt, according to Scarborough, focused more on concepts and the look of the character rather than its “overall arc.”

“The word ‘fiend’ was never used,” Scarborough said. “It wasn’t till after he debuted The Fiend look on TV that somewhere, somebody had used the word, ‘This is The Fiend.’ I didn’t even know it was going to be an official title.”

The whole process, from Wyatt reaching out to the debut, was roughly six months. 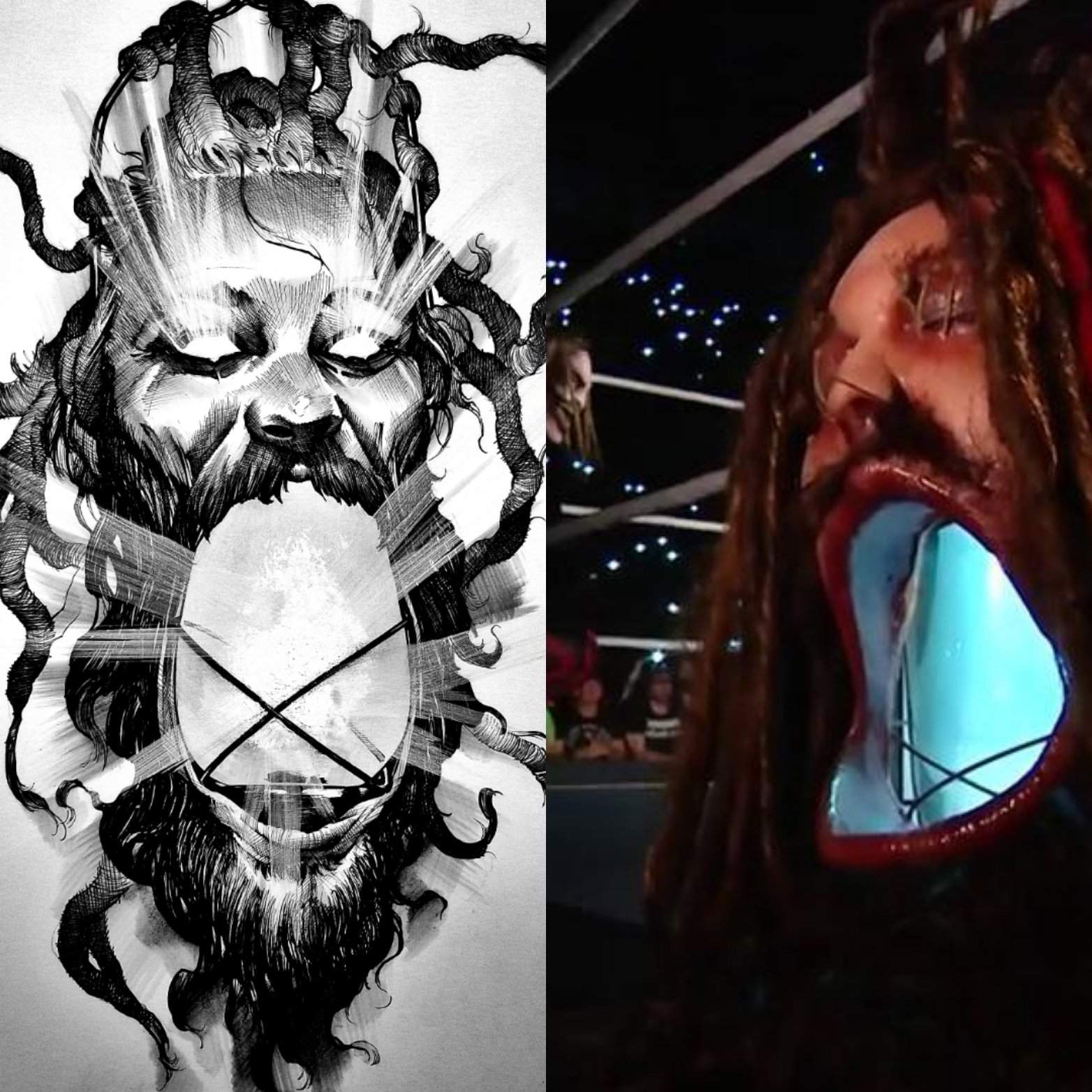 A sketch of The Fiend lantern and the end result.

DEBUT OF THE MASK

The night The Fiend officially debuted, after weeks of vignettes teasing a revamped Bray Wyatt, Scarborough was at a concert and received a message from Wyatt that read, “Congrats brother. We changed wrestling forever.”

Wyatt, according to Scarborough, is “extremely supportive, extremely kind and very very passionate in what he does.” When Scarborough’s sketches started making the rounds online, Wyatt responded positively.

At the same time, Scarborough said, he is grateful that Wyatt considered him — out of the “tons of artists across the world” — to be a part of the process.

For the Missouri-based tattoo artist, the experience of working with people he is a fan of and being part of a trending item on social media was equal parts humbling and surreal.

“It’s been cool,” Scarborough said. “I don’t think my kids think I’m any cooler for it… [But] this a dream come true. I got to draw pictures of the people I admire. I’m doing what I love.”

Scarborough said he currently has some things “in the works” in relation to Wyatt, but nothing he could speak about at the time of the interview.