Two star wrestlers have died within a day of each other, both with a confusing name history, with others using the same in-ring name. The Kendo Nagasaki who passed away on January 11, 2020, is Kazuo Sakurada. The LA Parka who died on January 10, 2020, is Jesus Alfonso Huerta Escoboza.

To clarify, the Kendo Nagasaki who passed in not Peter Thornly, the retired British icon, and the LA Parka is not the same performer who was in World Championship Wrestling, as that is Adolfo Margarito Tapia Ibarra, who currently competes in North America in Major League Wrestling as LA Park. 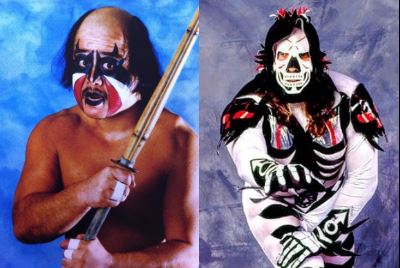 In November 2019, LA Parka was injured at an AAA show, in Monterrey, Mexico, after a suicide dive went wrong, his feet getting caught in the ropes, and hitting the guardrail and then the floor with his head. Following surgery, the news remained grim, and he survived until January 10. He was 55 years old.

Escoboza actually took the name LA Parka from the original, Ibarra, who began using the name in 1992. Originally LA Parka Jr., Escoboza was often referred to as LA Parka II to help with the misindentification, though in AAA, he was just LA Parka, and had been a top name in the promotion for years. The LA does not refer to Los Angeles, but La Auntetica (The Authentic or The Original).

Early in his career, which began in 1987, Escoboza was known as Bello Sexy, Maligno, Crater, Santa Esmarela, Karis la Momia. His break came in 1996 when he became LA Parka Jr.

Even though LA Park had a falling out with AAA, there was a battle between LA Park and LA Parka II in AAA at TripleMania XVIII in June 2010.

News of the death of Kazuo Sakurada spread quickly. He had been a notable wrestler for years in Japan and overseas, and was a respected trainer. He was 71 years old. A heart issue resulted in his passing, his pacemaker apparently failing.

In North America, Kendo Nagasaki was synonymous with the use of the green mist blown in opponent’s faces and working as a solid heel. Yet he did far more than just that during his time away from his home country of Japan.

One of his first breaks away from Japan was in Stampede Wrestling, where he teamed with Mr. Hito (Katsuji Adachi) and worked as Kazuo Sakurada. They battled all the babyfaces throughout the Canadian prairies. Often, Sakurada competed in tag team battles, and held the Stampede International tag belts with Hito, as well as John Quinn, Gil Hayes, Higo Hamaguchi, and Michel Martel, at various times.

Later, Sakurada was one of the trainers of “Hitman” Bret Hart. His diving headbutt was adopted by the Dynamite Kid and then Chris Benoit.

He had great runs in Texas, Memphis, Florida, Puerto Rico, and into the Mid-Atlantic territory. When he was “the Black Ninja” Kendo Nagasaki, he dressed as a Japanese warrior, with face paint and an ever-present kendo stick or even a Samurai sword. He was The Dragonmaster in WCW.

Among the names he helped train along the way are Ryuji Yamakawa, Shuhei Taniguchi, and Abdullah Kobayashi.

Sakurada was also a key intermediary between wrestlers — and a referee — in North America, and the Japanese promotions.

Texan referee James Beard posted on Facebook that he owed his career in Japan to Sakurada.

“I will never forget the moment….standing in back watching a match and standing next to me was Kazou Sakurada, better known to wrestling fans as Kendo Nagasaki or The Dragonmaster….He never said much, but we had gotten to know each other pretty well, thanks to working with him and through our close mutual friend, Larry Dwyer. Out of nowhere he said, ‘You get passport…Go to Japan,'” wrote Beard. “I was stunned and at first thought he must be kidding. But, he was serious and that led to a long, close association and many Japanese tours which changed everything for me and my career in this business. I have been blessed to have had some great influences and supporters during my career, but i can’t say enough about the opportunity Sakurada gave me and what it’s meant to me over all these years.”