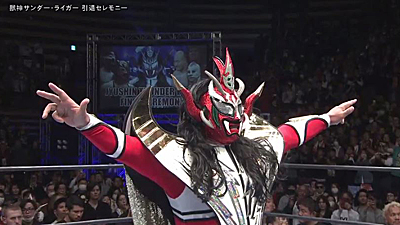 Jushin ‘Thunder’ Liger thanks the fans for all of their support. Photo: NJPW.

At his retirement ceremony the current NJPW roster paid their respects as well Chaos on their own. The leader of Chaos, a five-time IWGP Heavyweight Champion, Kazuchika Okada, even took a selfie with Liger and the rest of Chaos to commemorate the event. 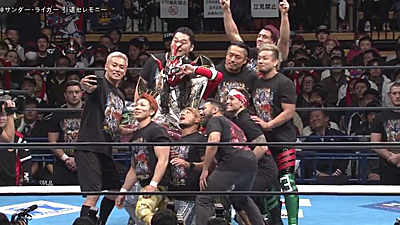 Kazuchika Okada and the rest of Chaos take a selfie with Liger. Photo: NJPW.

NJPW Chairman Naoki Sugabayashi and President Harold Meij also presented Liger with a bouquet of flowers, which is a deeply rooted Japanese tradition and customary gift. 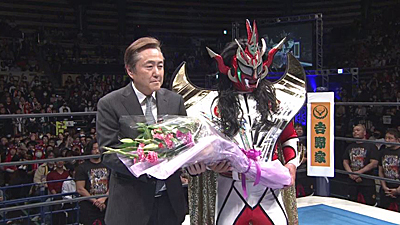 There wasn’t a dry eye in the arena when Liger’s wife and son, who also couldn’t hold back their tears, hugged the wrestling legend in the ring. 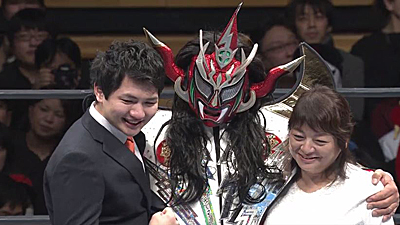 Liger, his son and his wife. Photo: NJPW.

The crowd broke into thunderous cheers for Liger before he addressed them. 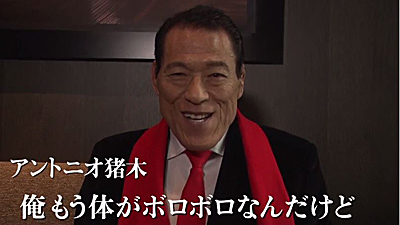 “The professional wrestler Jushin ‘Thunder’ Liger is no longer but New Japan Pro Wrestling will continue to thrive thanks to everyone,” said Liger thanking all of the fans around the world who have supported him including his mother who was at the Tokyo Dome last night and at the ceremony tonight.

“On a personal note, thank you for raising me and I have nothing but gratitude for you,” said Liger to his mother.

“To my wife and my son, I have made you so lonely being on the road for so long and living this life. Now, I am coming home and you are going to have to put up with me,” Liger joked.

“For these 31 years, thank you so very much,” Liger concluded before taking his last bows in the ring.

The crowd cheered his name once again before standing in silence as the ring bell was rung in commemoration of his career.

His name was announced for the final time as his theme song was played.

The locker room then gathered up Liger and tossed him into the air over and over in the middle of the ring. 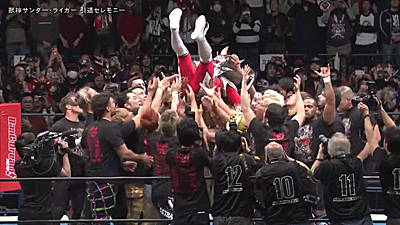 Liger is hoisted in the air. Photo: NJPW.

Hiroshi Tanahashi then called on everyone to sing the words to Liger’s theme song as they clapped.

Liger then left the ring, saluted those in it and shook the hands of fans as he headed to the locker room one final time as fans cheered his name. 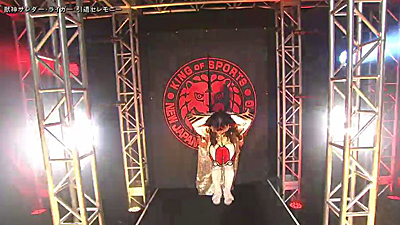