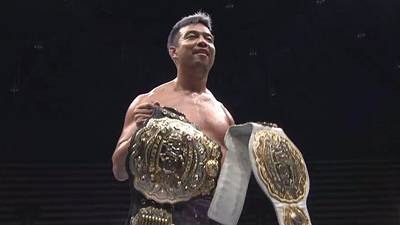 What a difference a year makes. Kenta was floundering in the WWE/NXT and John Moxley as Dean Ambrose was on his way to watching WrestleMania from the comfort of his home. Now, Kenta is in the title hunt in NJPW and Ambrose is one of the hottest commodities in two promotions, if not the wrestling world. It seems they are doing quite well in their “future endeavours”.

The upcoming feuds for both Moxley and Kenta were among many that had a fire lit under them at New Year Dash, the annual Wrestle Kingdom follow-up NJPW event.

Kenta receives a chilly reception for what he did to Naito at Wrestle Kingdom as he came to the ring.

Naito enters with the IWGP Heavyweight Championship and the IWGP Intercontinental Championship belts staring a hole through Kenta.

Naito doesn’t bother to take off his entrance attire as he rips into Kenta. He stomps him out of the ring, hurling him into a ringside barrier. Naito dives into the lion’s den as Kenta and White pummel Sanada outside the ring. Kenta sends Naito right over the guardrail. Kenta labels Naito with punches before DDTing him on the concrete floor.

The crowd chants for Naito. Kenta claps along with them. Naito tears into Kenta and White, driving them both from the ring. Naito has Kenta by both legs in a corner. Kenta cannot kick himself free. Naito spits in his face. Naito slaps and kicks Kenta in the head riling him up.

Kenta is booed when he targets Naito’s injured knee. White is tagged in working over that knee. Sanada is tagged in. His speed is too much for White or Kenta to deal with as he splashes both of them on the floor. Gedo attempts to sneak into the ring but Sanada kicks the ropes into his “lower abdomen” stopping him dead in his tracks. The crowd cheers wildly.

Sanada foils White’s Blade Runner simply by rolling him up for the pin. An enraged White punches Sanada from behind in the family jewels as Kenta fights off Young Lions so he can choke Naito with the ringside barrier. Kenta and White each grab a steel chair and waffled Naito and Sanada with them.

White tries to talk on the microphone but the crowd keeps booing him down.

“I’m going to being you down to reality and that reality is that you, like everybody else are not better than me,” yells White at Sanada.

Kenta takes the microphone and is booed.

“My point is I am going to take those two belts from you!” yells Kenta at Naito before kicking him in the face.
…
Yuya Uemura, Yota Tsuji and Toa Henare versus Alex Coughlin, Clark Connors and Karl Fredericks

There is a lot of pushing and shoving between the NJPW and LA Dojos before the match begins. The official has a hard time keeping everyone apart.

Fredericks says to Uemura “Let’s see what you’ve got, you little s—t!”

Fredericks comes close to tapping out to Uemura’s Boston Crab. His partners save him. Uemura taps out to Fredericks’ half crab. The two groups have more words between them and some fight back to the locker room.

Henare tells Kevin Kelley that this year will be his year. The fire will rise.

The IWGP Junior Heavyweight Tag Team Championship belts are not on the line tonight. On Hiromu’s wrist tape is written “Thank you, Liger.” Bushi wears a Liger tribute mask. El Phantasmo and Taiji Ishimori jump-start the match attacking Sho and Yoh for the loss at Wrestle Kingdom. Ishimori puts Hiromu in a cravat hold then throws him into one of the turnbuckles.

El Phantasmo mocks Liger as he puts Hiromu in a submission hold. Kanemaru whips Hiromu into the steel ring barricade then double stomps him as he hangs over it.

Bullet Club and Suzuki-gun team up stomping Hiromu into the mat. Sho and Yoh are ready to put Desperado away. Kanemaru and Bushi put a stop to that. Desperado pushes Sho into Bushi who spits green mist into his face. Desperado pins Sho.

There is talk of Ibushi being given an olive branch by Bullet Club to possibly join them. Finjuice are wearing special Liger hats, throwing them into the crowd as souvenirs for lucky fans. There is debate about who should start the match. Ibushi starts against Chase Owens. Owens offers Ibushi a chance to join the other side. He says Ibushi lost twice and Bullet Club can help him become a winner. Ibushi slaps away Chase’s hand. Owens loses it on Chase. Ibushi gives his team the win by wiggling out of a Package Piledriver. He and Tanahashi double-team Owens with a Slingblade and a Kamigoye. After the match, Ibushi and Tanahashi signal that they want a shot at FinJuice’s belts. FinJuice, smiles, agrees and shakes on it.

A nasty, brutal bought. All four men just bash and batter each other without any remorse. Insanity! Evil wraps a chair around Ishii’s head, smashes that chair with another chair and it nearly lands in the first row. Shingo puts Goto in the ropes hitting him with a modified GTR. Shingo pins Goto with Last of the Dragon pinning the Never Open-Weight Champion. Ishii and Evil have some words. Shingo takes the microphone. He wants a rubber match against Goto, since they are tied at one in their rivalry. “Put that title on the line and come at me again!” yells Shingo saying he will wait for Goto’s answer.

Taichi resorts to kicking Okada in the “lower abdomen” and punching him in the face with the Iron Glove. Taichi kicks the official down. Taichi starts choking out Okada with his microphone stand. Taichi stands on Okada’s throat.

Before he can piledrive Okada, Jon Moxley’s music hits. Moxley chases Taichi out of the ring. Kevin Kelley: “You have got to be insane to get into Suzuki’s face!” Moxley and Suzuki punch each other over and over, laughing after each blow. Moxley gets some revenge by spiking Suzuki with the Deathrider.

Winners: Birds of Prey (Robbie Eagles and Will Ospreay), Yoshi-Hashi and Kazuchika Okada via disqualification.