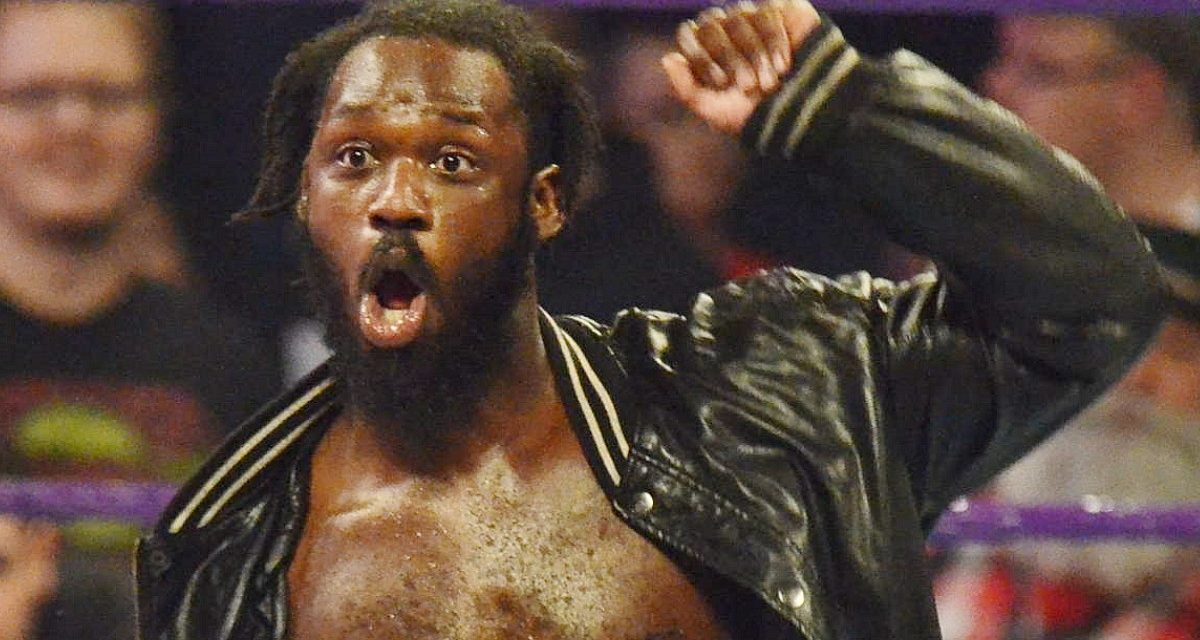 With infectious charisma and an exhilarating moveset, Rich Swann has captivated fans across the continent. Billed at 5-foot-8 and 200 pounds, he hasn’t let his size hinder his accomplishments; a WWE Cruiserweight Championship win in 2016 is just one of his career highlights. After competing in multiple promotions, Swann has settled in IMPACT Wrestling where he reigned as X-Division Champion for 194 days, and later main evented No Surrender ’19 in a World Championship bout. On January 20th, his hunt for championship gold continues when he and Willie Mack face The North for the tag team championships at Hard to Kill.

As a consistent IMPACT roster member, Rich Swann is regularly competing in high-caliber matchups and events. I caught up with him at Motown Showdown ’19 in Belleville, Michigan, where he discussed working with IMPACT, his wrestling mindset, introduction to WWE, and more.

Earlier this year you left Major League Wrestling to work solely for IMPACT. What made you decide to stay with IMPACT over MLW?

The thing is, I never really left MLW for IMPACT. And I never really necessarily left MLW. Things just didn’t add up with scheduling with IMPACT and MLW whereas though sometimes they would have me on certain IMPACT Twitch shows where at the same time there’s going to be an MLW show running. And the thing is, no disrespect to MLW, but if I am under a contract with IMPACT Wrestling, IMPACT Wrestling is priority. So that may be — you know what I’m saying — a general assumption of people that they think that I chose another company, but I’m always open for business with MLW. ‘Cause I think they are a great product, I love what they’re doing, they have a great market. And you know, it’s another platform for the public and for professional wrestlers to get their chance to shine.

With IMPACT, are you still able to work for independent groups?

Yes, I’m under a contract where I take IMPACT, AXS TV dates, and the Twitch dates — I take that as priority. But as they’re not running I’m allowed to go out, spread the brand of myself and also IMPACT Wrestling, and I’m able to wrestle anywhere — PWG, GCW, other local independent promotions that are out there, Next Generation Wrestling in Tennessee. I’m able to go all over, so that’s the good thing about IMPACT. It’s a lot of freedom for their wrestlers to go out and actually put more on their brand and on the IMPACT brand as well. 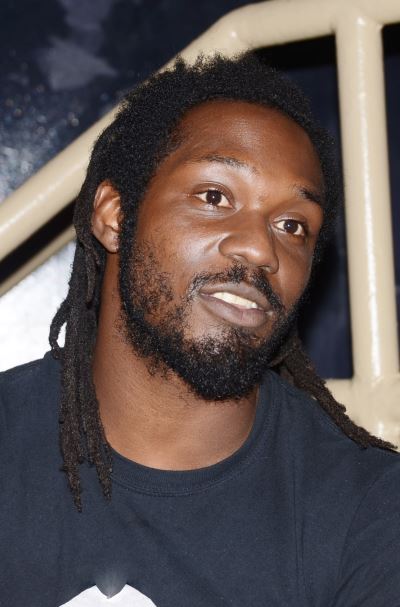 Yesterday (December 7th) you wrestled Sami Callihan for the World Championship. What are your thoughts on that match and also being able to main event the No Surrender PPV in a world title match?

Growing up it’s always a dream to be in the main event of something that you aspire to be. And to do it with somebody like Sami Callihan — it’s no secret Sami and I, we have a huge, huge, huge story behind us. We’ve grown up together damn near in this business, he helped me a lot when I was down. And to be in that main event for No Surrender, a PPV that I used to order, I used to watch back in the day as a kid seeing guys like AJ Styles, and Christopher Daniels, and Samoa Joe, Chris Sabin, Alex Shelley — seeing those guys kill it, you know what I’m saying? Like, to main event that for the World Championship, it was a dream come true, it was an honor. Especially as a professional wrestler, one thing you should strive to do is be the top of whatever company you’re in and to be in that position. And the fact that they trusted me to be in that position — you know, that’s a great honor.

To follow that, you’ve been in the world title picture, X-Division, and tag team division for IMPACT. Did you ever feel restricted under just one division like the WWE Cruiserweight division?

You know, I never feel restricted at all because here in IMPACT Wrestling with the X-Division it doesn’t really matter if you’re 100 pounds or 500 pounds. The thing about the X-Division is there are no limits, there are no weight limits. It’s just about your heart, and about your drive, and how you can go, and how you perform in that ring. And that’s what the X-Division championship’s all about. But as far as feeling restricted, there’s never any restrictions. Like, if you put me in the ring with somebody my size, you know you’re going to get a high-flying classic. If you put me in there with somebody like Michael Elgin, you know I’m going to be fighting from underneath and you know that I’m gonna be busting my ass and be trying — you know what I’m saying, to make these people believe that I can beat somebody that size. And the thing is, I love that challenge. And then also when you put me and Willie Mack together, the weight differentiation — you know, we get to do some very unique stuff, and that’s what makes IMPACT great.

There’s been a lot of controversy over racial injustice in the business, what are your opinions on that?

You know, obviously in every — how can I put this — in every line of work there’s always gonna be somebody that doesn’t like someone. And it doesn’t matter if it’s the race, creed, sexuality — you know, there’s always gonna be somebody trying to hate on somebody. And the way I look at it, yes, back in the day there was a lot of African Americans, and Spanish, and the Japanese. And they weren’t looked at in the same light as somebody who was a Caucasian performer — maybe looked at a little less than. But now I feel like it has gotten better within the industry. It’s not as — you know what I’m saying, it’s not crazy as people try to make out to be, at least from my perspective. But I will say, there are things that are done shady — you know what I’m saying, but that’s things I can’t control. I can only control what I do in this business. And whatever I can do, I’m trying to make it a positive business for me and for whoever I’m around. 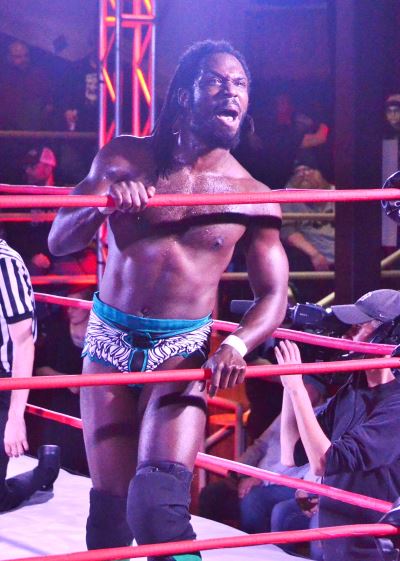 I’ve read that Mark Henry helped you and Apollo Crews get tryouts for the WWE. Was there anyone else that was really influential in supporting African American talents?

You know, it was Mark Henry. He was super, super huge on really trying to get me — and at the time (Apollo Crews) was going by Uhaa Nation, he was very, very adamant on trying to get us in there. Also, Ricochet as well. And another person that was really, really adamant and really trying to push for us to get that opportunity, which we obviously did, was famous rapper Wale. I never really realized how big of a wrestling fan this guy was until he put out a freestyle of the Razor Ramon theme. And he’s rapping on it, he’s dropping all these insane bars, and they’re all wrestling related. And it’s like “Oh my gosh!” And I was always a fan of his, but like I never knew he was such a huge wrestling fan. And once he got in contact with Mark Henry, they’re good friends, then the ball started rolling. He hit up the WWE, and the WWE, they hit me up. Those guys — I feel like even if you’re black, white, it doesn’t matter. If they see talent they’re going to try to push for that person — you know what I’m saying. And if you’re a genuine person, if you’re real — you know what I’m saying. And I think that’s a great thing. That’s how it should be in this business.

As 2019 comes to a close, where do you see yourself in IMPACT or maybe even somewhere else for 2020?

You know, I see myself in 2020 trying to make this company and myself a bigger brand. Now that we’re on AXS TV, it’s a bigger platform, it’s more eyes on us. And all I want to do is try to make IMPACT Wrestling one of the best companies for the fans to watch. That’s what I see myself doing in 2020 just like I did in 2019. 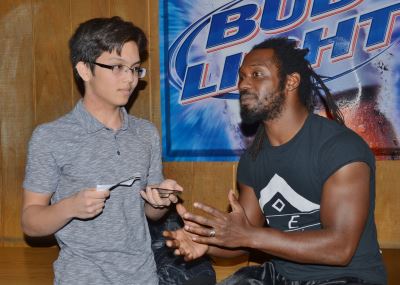