Grappling By Gaslight a novel approach to 19th century wrestling

American journalist James Wolcott once said, “Everyone is entitled to his own nostalgia.” And for pro wrestling fans eager to embrace a simpler time between the ropes, they don’t have to look further than John Cosper’s latest self-published novel, Grappling By Gaslight.

“I’ve wanted to write more about 19th century wrestling since my first book, Bluegrass Brawlers,” revealed the 44-year-old Cosper, who resides in Southern Indiana, in an email interview with SLAM! Wrestling. “I’m fascinated by the era. The problem is there is so little information on the wrestlers themselves. Other than newspaper clippings, it seems nothing else has survived. I chose to write these fictional accounts of the era to try and capture the spirit of the times, to give people a feel of who these people were and how they laid the groundwork for today’s pro wrestling.”

Cosper’s current foray into fiction is a compilation of six original short stories. It’s not his first collection of short stories, but it is the first that focuses on pro wrestling. The stories are brief enough to complete in one sitting yet still hallmark vivid and interesting characters. In “Part One: The Hooker,” a dim-witted farm hand is encouraged to step into the ring to answer an open challenge and prove the authenticity of wrestling. In “Part Two: The Strong Man,” a young boy idolizing a strong man is smartened up to the business. In “Part Three: The Pixie,” a reporter falls for a female wrestler with a penchant for intergender matches. In “Part Four: The Honors,” a white wrestler in post-Civil War times, reluctantly takes on the persona of a racist character in the ring. In “Part Five: The Mask,” a young woman takes control of her destiny after falling for a sketchy wrestling promoter. (This story was the highlight for this writer/reader as it features a dark and unexpectedly twisty ending!) For “Part 6: The Mark” and the book’s epilogue, Cosper gifts the reader with two bonus sequels that expand and satisfyingly conclude two of the aforementioned tales. 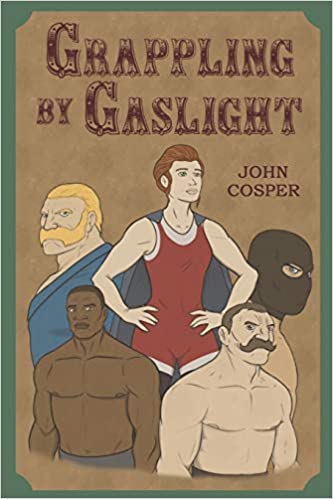 Despite being characterized as fiction, some of the characters featured in the book are even inspired by real life past wrestlers including Ida Alb and Viro Small. “Ida Alb was a circus wrestler who did an intergender gimmick very much like the one portrayed in Grappling by Gaslight,” shared Cosper, who in 2014 cemented his passion for wrestling and writing by creating the Eat Sleep Wrestle website. “I’ve tried to dig up more information on her in the years since I wrote Bluegrass Brawlers, but there’s just nothing. I’ve always wanted to write something more about her, and that desire led to writing this series of stories. Robert Pennell and Charles Flynn, two friends who worked a strongman-issues-challenge-gimmick, inspired another one of the tales. Also, Viro Small, the former slave who became a star in New York under the name Black Sam.”

But Cosper hasn’t forgotten about the grapplers currently giving their all in the squared circle. The self-proclaimed lover of all things indy wrestling, Cosper dedicates the book to “four of (his) favorite modern wrestlers”: Hy-Zaya, LuFisto, Kassius Ohno and Mad Man Pondo.

With a book focused on the past and featuring several characters questioning the legitimacy of wrestling, it seems only fitting to question Cosper about his thoughts on the death of kayfabe (an unspoken rule where wrestlers were expected to stay in character at all times) and the current climate of fans being more aware of the behind the scenes aspects of pro wrestling.

“There’s something for everybody in wrestling,” Cosper pointed out. “Largely due to the fact that the cat is out of the bag. There’s old school wrestling with heroes and villains, cartoonish wrestling that’s not at all believable and everything in between.”

He added, “That said, I really enjoy the wrestlers who can make a crowd lose themselves in the moment. As Johnny Valentine said, ‘I can’t make you believe wrestling is real, but I can make you believe I’m real.’ Tracy Smothers can still make people believe. So can some of the younger wrestlers today like MJF (Maxwell Jacob Friedman), Madi Maxx, Mr. Darius Carter, Savanna Stone and Nick Iggy of The Carnies. I love watching them, and watching the crowd when they’re in the ring. They can make people suspend disbelief.”

Just like in his previous books, Cosper always has the ultimate goal of teaching his readers something new about pro wrestling.

“I hope they (the readers) get a sense of where pro wrestling came from,” concluded Cosper. “Yes, the book is fiction, but there’s a lot more truth in these stories than you might think. There was a woman who issued intergender challenges to prove she wasn’t a fake. There was an African American grappler in the 1880s. There were con men and barnstormers looking to make a fast buck. There were people “working” even in the earliest days of the sport. Oh yeah, and the thing about the horse in the book? It actually happened, just the way it unfolds in the book.”