Kazuchika Okada delivered a rainmaker on Jushin Thunder Liger to win the match and end Liger’s last match inside the famous Kōrakuen Hall. After the match, Okada thanked Liger for helping him get into the wrestling business. 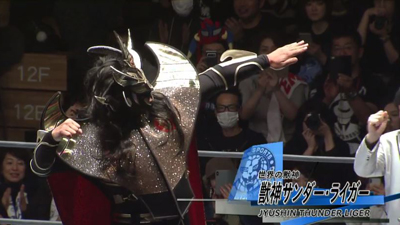 At 55-years-old and after 35 years in the wrestling business as one if not THE greatest ambassador of Japanese wrestling and cruiserweight wrestling in particular, Liger will be calling it a career at Wrestle Kingdom. On Night One he will team with Tatsumi Fujinami, The Great Sasuke and Tiger Mask (with El Samurai) against Naoki Sano, Shinjiro Otani, Tatsuhito Takaiwa and Ryusuke Taguchi (with Kuniaki Kobayashi). In his final match on Night Two he will join forces with Naoki Sano to take on Ryu (Dragon) Lee and Hiromu Takahashi.

On this night though, CHAOS (Kazuchika Okada, YOSHI-HASHI & Rocky Romero) defeated Jushin Thunder Liger, Hiroshi Tanahashi & Kota Ibushi. Ibushi and Okada started the match. The crowd was chanting for both men. Red Shoes the referee pointed at each man listening to the crowd and evaluated which wrestler was getting the louder chant. Ibushi kicked Okada and knocked him off his feet.

Liger entered the match and the crowd exploded since this was the last time that Liger will wrestle in Kōrakuen Hall. However, Rocky Romero dominated Liger. Tanahashi and YOSHI-HASHI exchanged strikes and YOSHI-HASHI gained the advantage and knocked Tanahashi to the floor. The crowd was solidly behind Tanahashi. 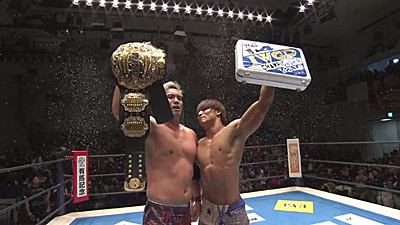 Ibushi delivered a series of fists and kicks to YOSHI-HASHI. Liger received a hot tag and cleaned house and got a near fall on Okada. Okada hit a spinning tombstone followed by a Rainmaker to pin Liger and win the match. The crowd chanted for Liger after the match.

After the match White sunk in and attacked Okada. Naito ran in and attacked White. Gedo hit Naito with a chair. Okada drop kicked White and grabbed the microphone and held up the IWGP Championship declaring himself the best. Okada thanked Liger and the fans for attending NJPW.

The two young lions, Uemura and Tsuji, exchanged many forearms and Tsuji followed it up with a back drop. Uemura locked in a Boston Crab on Taguchi in the middle of the ring. However, Taguchi reversed the hold into an ankle lock. Taguchi followed up with a Dodon on Uemura for the win via pinfall.
…
CHAOS (SHO, YOH & Robbie Eagles) beat Bullet Club (El Phantasmo, Taiji Ishimori & Yujiro Takahashi). Roppongi 3K attacked Phantasmo before the bell. The house lights got turned on as everyone in the match brawled all over Kōrakuen Hall. When the match returned to the ring, members of CHAOS dove over the top rope onto the Bullet Club.

Eventually, the madness settled down with Phantasmo and YOH wrestling in the ring. Ishimori came into the ring to help Phantasmo double team YOH. YOH made a desperation tag to SHO who cleaned house on the Bullet Club. Phantasmo hit Eagles with a belt, which got Phantasmo disqualified and as a result CHAOS won the match. 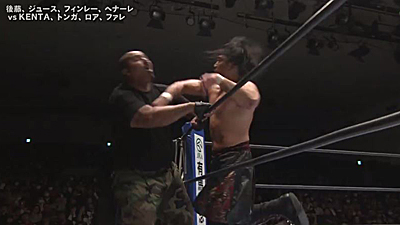 BUSHI defeated Zack Sabre Jr. BUSHI delivered a dropkick to start the match off. Black Mask Horse accompanied Sabre to the ring and he attacked BUSHI early in the match. Sabre grounded BUSHI and applied different leg locks on BUSHI. BUSHI eventually grabbed the rope to get a break. BUSHI attempted a high flying move but his leg gave way. However, BUSHI was able to dive onto Black Mask Horse and followed it up with a DDT on Sabre. BUSHI used the BUSHI roll to pin Sabre for the win.
…
Bullet Club (Tama Tonga, Tanga Loa, Bad Luck Fale & KENTA) beat Hirooki Goto, Juice Robinson, David Finlay & Toa Henare. All wrestlers brawled in the ring as soon as the bell rang. The brawl slowly spilled to the outside of the ring. When the dust settled, Tama Tonga was working over Robinson in the ring.

KENTA and Goto entered the ring and both men exchanged a series of hard strikes. Goto delivered a side suplex for a near fall. Henare entered the ring and dominated KENTA with elbows and kicks. KENTA delivered a spinning clothesline for a near fall. KENTA hit the Go To Sleep on Henare for the win.
…
CHAOS (Will Ospreay & Tomohiro Ishii) defeated Los Ingobernables de Japon (EVIL & Hiromu Takahashi). Ospreay and Hiromu started the match with a very fast pace. Hiromu rolled to the outside of the ring and Evil and Ishii locked up followed by each man running into each other. Evil got Ishii into the corner and delivered many forearms.

Ishii delivered chops to the throat of Evil. All men brawled on the outside of the ring including near the English announce table. Ospreay and Hiromu entered the ring again and the match pace quicken. Ishii and Evil exchanged stiff forearms with each other and the crowd was behind the two men. Ishii hit the brain buster on Evil for the win.
…
Los Ingobernables de Japon (Tetsuya Naito & Shingo Takagi) beat Bullet Club (Jay White & Chase Owens). White whipped Naito into the guard rail while Owens was stomping on Takagi on the outside of the ring. White returned to the ring and mocked Naito who was on the floor outside of the ring. When Naito returned to the ring, White pinned Naito to get a near fall.

Owens came into the ring and dominated Naito. Naito spit in White’s face. White aggressively stomped on Naito and then spit in Naito’s face. Naito tagged to Shingo who cleaned house once he entered the ring. White and Naito were tagged into the match and Naito slowed down the pace and dominated White. Owens came in and got a series of near falls on Naito. Shingo hit the Last Of The Dragon on Owens for the win via pinfall.