BELLEVILE, Mich. – One night following the No Surrender iPPV from Dayton, Ohio, IMPACT Wrestling road tripped to Belleville, Michigan, for its annual Motown Showdown. Streaming live on Twitch from the illustrious Diamondback Saloon, Sunday’s event packed a few hundred into the Metro Detroit bar where every seat was a good one. The in-your-face action and rowdy Motor City audience created the authentic Motown Showdown atmosphere that keeps the promotion returning for more.

The event was headlined by Michigan’s own Rhino, as he challenged for the IMPACT World Championship against Sami Callihan, plus many other bouts that featured IMPACT’s best like Eddie Edwards, Michael Elgin, and Brian Cage. In what was the company’s final Twitch stream of the year, it produced an iPPV quality card that rocked the venue. Here are five memorable moments from my live experience at Motown Showdown: 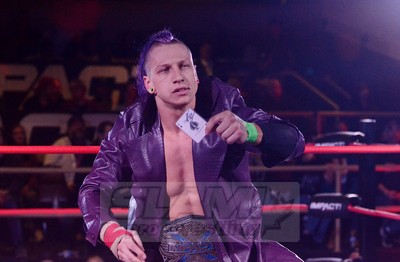 The X-Division kicks off

The opening bout pitted Dez of The Rascalz against X-Division Champion Ace Austin in a championship match. It was the epitome of the division that saw fast-paced movements and high spots alike which pumped the crowd for the night. Belleville got behind Dez in his championship effort, but Ace Austin literally had an “ace up his sleeve” that came into play twice for him to retain. Overall a solid opening match that both impressed and energized the crowd. 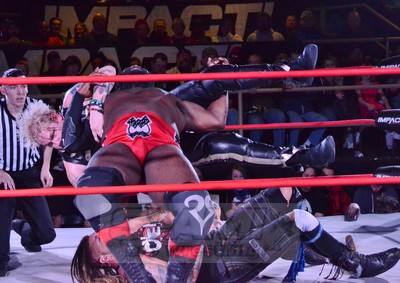 It’s a big pile-up during the OVE vs Eddie Edwards, Rich Swann and Willie Mack bout.

Edwards, Mack, and Swann team up to defeat OVE

In what was scheduled to be Eddie Edwards vs Madman Fulton, an interference between Jake and Dave Christ halted the matchup. Out came Willie Mack and Rich Swann to even the odds and create a wild 6-man tag bout. A brawl spilled out into the saloon where the competitors used the scenery to their advantage. Swann knocked Christ off a lighting pole which followed a giant senton from Swann into the mass of bodies. Once the action moved into the ring the chaos continued; an apathy for the legal man and multiple breakups kept the match alive and active. Eventually, a combination of finishers that ended with the Boston Knee Party from Edwards granted his team the victory. Swann found pleasure in the win as he sang Edwards’ entire theme song straight into the hard cam. 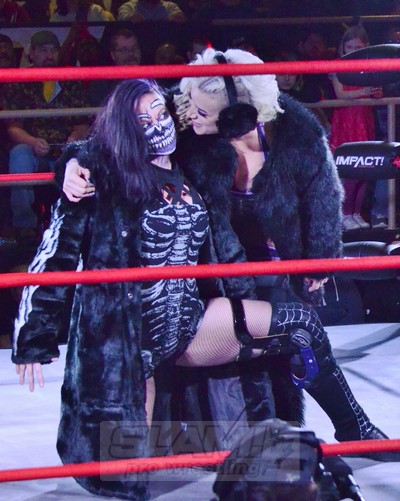 Conflict arises in the Knockouts division

The one women’s match on Sunday teamed Madison Rayne and Havok against Knockouts champion Taya Valkyrie and Rosemary. Both were odd pairings, but Rayne seemed to have a better relationship with her much larger partner. Rayne took to the mic and asked her opponents to lay down for the pin, but they wouldn’t oblige. During the match, Valkyrie and Rosemary had a miscommunication that almost cost them the win, however they recovered. They whipped Havok over the ropes — a brutal back bump she took straight to the saloon’s wooden floors — but Rayne hit a roll-up for the three count. 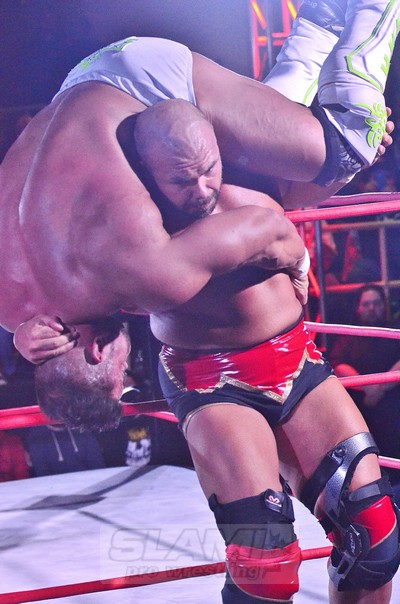 Brian Cage and Michael Elgin get a standing ovation

In a Slammaversary ’19 rematch, “Unbreakable” Michael Elgin battled “The Machine” Brian Cage. The amount of meat in the ring called for a brutal hoss fight. That promise was delivered with so much more. Suplex after suplex, near fall after near fall, signature after signature. The intensity and drama kept on rising for the better of 20 minutes, and no man was willing to give up. It took a small package from Michael Elgin to finally defeat Cage. The Belleville crowd rose to their feet in appreciation of the top tier performance by two incredible athletes. The duels between these two measured one for one, and hinted at a possible third encounter. 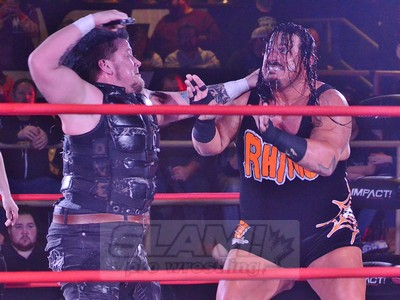 Sami Callihan pulls out the staple gun to go after Rhino.

Main event time, and the hometown hero entered to a welcoming roar. Rhino raced to the ring with a trash can in hand and immediately gored the champion. If Rhino is ever in a street fight, count on him brawling through the crowd; Rhino made his way around the Diamondback in a violent scuffle with Callihan, and the audience loved being a part of it. Back into the ring, Callihan turned the tables when he introduced a staple gun to the flesh of his opponent. He even took a sign from the crowd and paper-cut the mouth of Rhino. In the closing moments, Rhino set up a gore to a corner-set table (also a given for these matches), but Callihan threw the ref in the way who got decimated instead. While everyone was checking on the downed official, Callihan threw a handful of powder to the face of Rhino which assisted in the victory. Motown Showdown closed with a fallen hero and a surviving IMPACT World Champion. 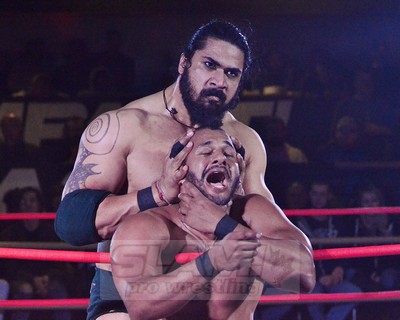 Rohit Raju of the Desi Hit Squad has his ears covered by partner Raj to protect him from the nasty words of the fans. 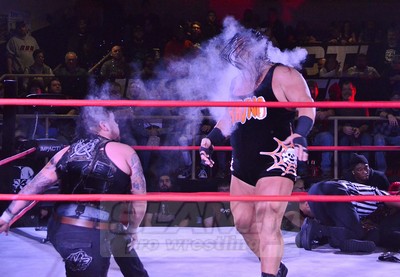 Sami Callihan throws powder at Rhino to escape with his IMPACT World Championship on Sunday night in Belleville, Mich. Photos by Brad McFarlin