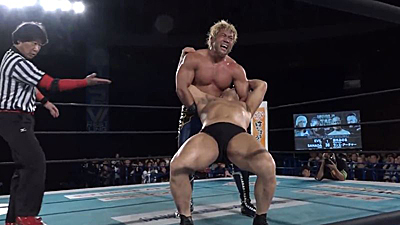 Evil and Sanada defeated the Suzuki-gun team of Minoru Suzuki and Lance Archer on Day 13 of the tournament. Sanada outmaneuvered Minoru Suzuki who had slapped a sleeper on him on the mat. Sanada rolled backwards putting Suzuki into Skull End. Suzuki flipped out of that reapplying the sleeper hold. Sanada escaped that pinning Suzuki with a bridge.

Evil and Sanada have won 11 of their 12 tournament matches.

After falling a bit behind, Juice Robinson and David Finlay were back to their winning ways beating another top team this year: Tomohiro Ishii and Yoshi-Hashi. Finlay hit a Stunner on Yoshi-Hashi. Robinson followed up with Pulp Friction to win the match. The loss means Tomohiro Ishii and Yoshi-Hashi are in a three-way tie for third place with Toru Yano and Colt Cabana, Minoru Suzuki and Lance Archer. Each of these teams has 16 points each.

Shingo Takagi and Terrible versus Yuji Nagata and Manabu Nakanishi

Owens put away Nicholls with a running knee strike and a Package Piledriver.

Toru Yano and Colt Cabana versus Kenta and Yujiro Takahashi

Taichi made Fredericks tap out.