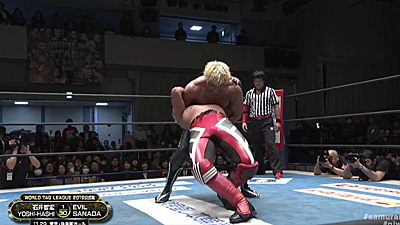 EVIL and SANADA of Los Ingobernables de Japon continue to be tied for the lead in the World Tag League tournament winning eight of their nine matches so far and facing Tomohiro Ishii and YOSHI-HASHI tonight.

EVIL and Ishii started the match off tentatively. SANADA ran into the ring and attacked Ishii. EVIL and SANADA double suplexed Ishii and YOSHI-HASHI. All the wrestlers rolled to the outside of the ring and a big brawl ensued.

Ishii made the hot tag to YOSHI-HASHI who cleaned house on EVIL. Ishii returned to the ring and dominated EVIL with chops and forearms. EVIL fell to the ground in the corner. Ishii whipped EVIL into the opposite turn buckle. However, SANADA ran in and both EVIL and SANADA double teamed Ishii. YOSHI-HASHI hit SANADA with a series of moves and got a near fall. SANADA went to the ring apron and hit a springboard dropkick. Ishii came to the ring and delivered a power bomb on SANADA and YOSHI-HASHI followed up with a splash for another near fall. EVIL and SANADA hit the Magic Killer for a near fall.

The current standings are:

Toru Yano & Colt Cabana defeated Yuji Nagata & Manabu Nakanishi when Yano pushed Nagata into Nakanishi who went down to the mat. Cabana did a superman pin on Nakanishi for the win.

Zack Sabre Jr. & Taichi beat Satoshi Kojima & Hiroyoshi Tenzan when Taichi delivered a low blow on Tenzan and Sabre Jr. followed up with the Zack Driver for the win.

KENTA & Yujiro Takahashi beat Hiroshi Tanahashi & Toa Henare when KENTA hit the Go To Sleep on Henare for the win.