The absolute carnage that was NXT TakeOver: WarGames

The most entertaining wrestlers come with a fire in their belly, a glow of determination in their eyes and a demolition mentality. The NXT women’s roster definitely did not come to play, they came for a fight at NXT TakeOver: WarGames.

In the pre-show we learned that Team Ripley member Mia Yim was attacked by an “unknown” assailant, which lead to Dakota Kia taking her spot. The bout really started to get interesting when Rhea Ripley was let out of the cage. Chairs, garbage cans and kendo sticks were hauled out from under the ring and the Australian Beast took out her anger on Bianca Belair. Not to mention taking three of her opponents and launching them onto a bed of folded chairs. Ouch, indeed! 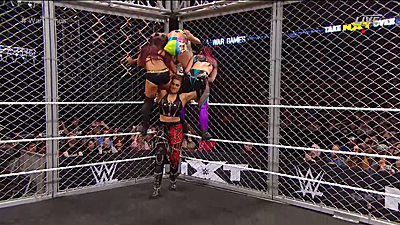 While all of this action is underway, Dakota Kai is released from her team’s cage and instead of rushing to the squared circle she makes a nasty decision. At last, we see the heel turn of the happy-go-lucky Kai.

Tegan Nox was inexplicably pummeled by Dakota Kai as the referees attempted to rip the two apart. The best part of all was when Kai stepped out of the cage and came face-to face with NXT General Manager William Regal. Clearly, she felt she had nothing to lose and pushed him.

As the fight continued back in the ring, Ripley put the tram on her back and demonstrated tremendous strength and power. However, Shayna Baszler looked her directly in the eye and her face read clear and simply…Fight me! Baszler didn’t seem as present or as active as I would have hoped in the match until the last minute. 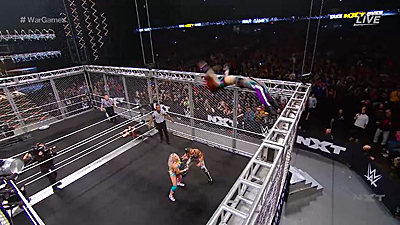 Io Shirai springs off the top of the cage. Photo Courtesy: WWE.

Candace LeRae has amazing stamina, which almost lead her to get a pin on Io Shirai. The rainbow girl got bashed in the face with a lid of a trash can. LeRae got her revenge and attempted to beat miss EST with a kendo stick. Belair using her hair as an advantage began whipping LeRae with her braid. It’s a very streetfight way to defend oneself and it worked perfectly here.

The rest of the match was filled with high-flying leaps off the of the cage, a crazy leap by Shirai who still couldn’t manage to get the pinfall for her team. 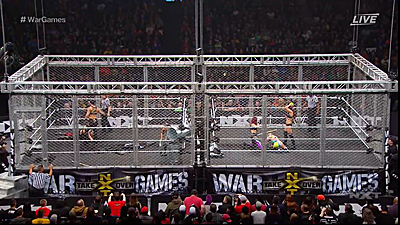 The view from outside the cage. Photo Courtesy: WWE.

Eventually, it came down to leader versus leader. Baszler had Ripley in a headlock and she thought it was over. Rhea Ripley, on the other hand was not going to give an inch. She summoned up enough energy to hold Baszler up and powerbomb her into two chairs. Ripley got the three count and her team has earned their way to Survivor Series.

The men’s WarGames match didn’t disappoint either. It was a story of fight, the underdog coming out on the other side and a familiar face coming back to help a struggling team earn the opportunity to compete against the red and blue brand on Sunday. 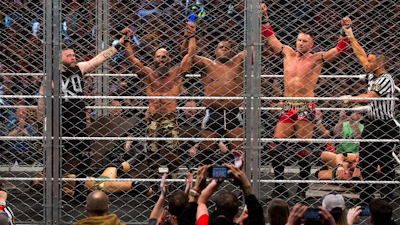 This year’s WarGames was all about the unexplained moments and the anticipation of what each match would present. NXT has a lot of talent and if it’s used in the right way, they should come out with some big wins at Survivor Series. Never underestimate your opponents. I’m looking at you, Raw and Smackdown.
…
Team Ripley (Rhea Ripley, Candice LeRae, Tegan Nox, and Dakota Kai) vs. Team Baszler (Shayna Baszler, Io Shirai, Bianca Belair, and Kay Lee Ray) 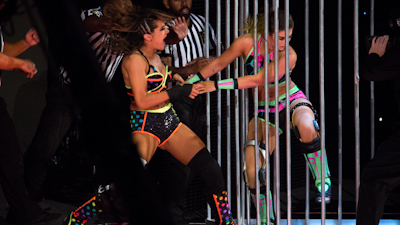 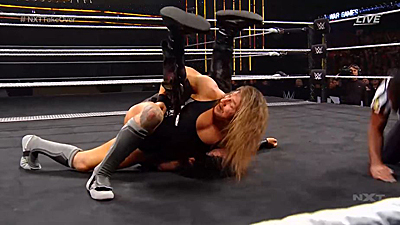 Imperium is in the front row acting as innocent bystanders as they watch the three competitors walk down the rap. Although, it’s never safe to say they are only in the arena to observe.

As time went on, it became a little sloppy and a slow. It looked as if fatigue had set in and it was only mid way through the match. Thankfully, they picked it up. Damian Priest proved to have a win-at-all costs attitude while Pete Dunne and Killian Dain showed a ton of strength. Nothing that wasn’t expected, making this match not as exciting as predicted.

Dunne came out on top by pinning Damian Priest for the win. 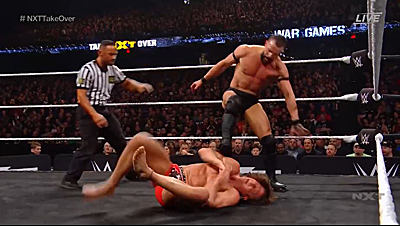 Finn Balor takes it to The Bro. Photo Courtesy: WWE.

I sincerely hope that Matt Riddle’s outfit was a one-time occurrence. The black and white patches on the shorts was not the most flattering choice. The match was very technical heavy and hard hitting. Both of these grapplers are talented so it was going to have to come down to ring IQ. Both looked like they were in a true battle and fighting with everything they have. I think it was safe to say they knew it was going to be a close call. 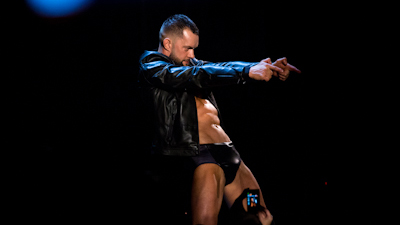 Finn is ready for action. Photo by Ricky Havlik, RickyHavlik.com.

That jack hammer that Riddle unleashed should have been enough but Balor’s veteran savvy allowed him to push through. Beaten and bruised, they put on a good show and I’m sure this won’t be the last time we see them in the ring together again. It was Balor’s experience that gave him the victory as he gave Riddle the 1916 finisher and pinned him for the win. Welcome back, Finn. 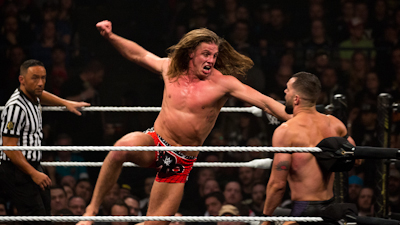 Riddle has a special delivery for Finn. Photo by Ricky Havlik, RickyHavlik.com. 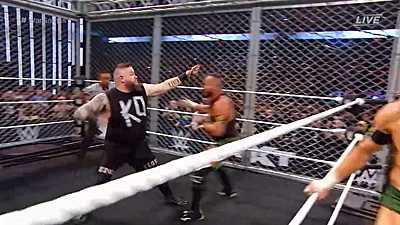 Roderick Strong makes his way to the ring to face Tommaso Ciampa, which only leads us to assume that there is no fourth member of Team Ciampa. I was a little surprised to see that Strong had the advantage as the bell rang as Ciampa has been so resilient in his past matches. The Undisputed Era seemed very coordinated in the squared circle and had a good pace going throughout the match. Then, the three hundred and forty pound athlete got in the cage and destroyed everyone. It’s hard to match the power of Keith Lee. 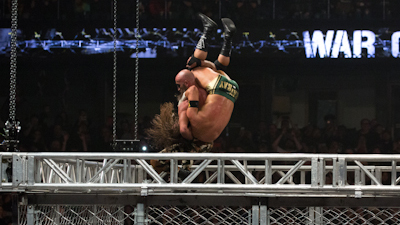 Ciampa and Cole take the express elevator down. Photo by Ricky Havlik, RickyHavlik.com

The commentary during this action was entertainment in itself. When Adam Cole whipped out the tables out from under the ring, Nigel McGuinness asked: What’s the idea here? What did you think they were going to do, set up a table and have a tea party? I don’t think so. Then the most unexpected moment of the whole show happened. Kevin Owens’ music hits and he makes his way to the ring to join Team Ciampa. The Chi-Town crowd roared. 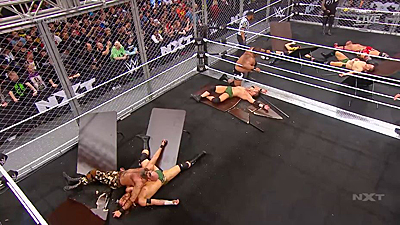 At one point the ring looked like a war zone with bodies lying everywhere, hustling to get back to their feet. I guess Ciampa was saving that resiliency for his last move, when he came down from the top of the cage and threw both himself and Cole through two tables. Ciampa got the 3 count and his team will be competing tomorrow at Survivor Series. As cameras surveyed the destruction, Adam Cole’s girlfriend – wrestler Britt Baker from All Elite Wrestling was shown on camera and identified by the announce team. 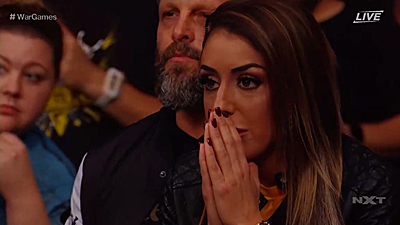