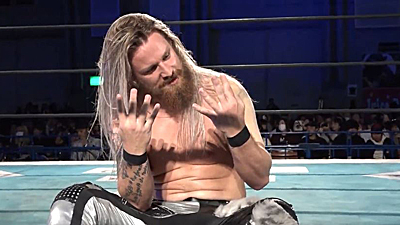 With Tomohiro Ishii and Yoshi-Hashi having a day off, Juice Robinson and David Finlay are at the top of the NJPW World Tag League tournament. On Day Five, the bombastic, crowd-pleasing team has overtaken former tournament leaders by two points.

The shift in fortunes had FinJuice defeating Hiroshi Tanahashi and Toa Henare.

All fired up, Toa Henare refused to shake Juice Robinson’s hand before they locked up to begin the match, which was unusual for Henare. Robinson could not match Henare’s strength and had to tag out to Finlay so Tanahashi entered the match to even things out.

Henare used his muscle to break free from a Stunner attempt by Finlay and a Pulp Friction attempt by Robinson. As Robinson and Tanahashi brawled on the floor, Finlay clobbered Henare with a knee strike from the second rope and a neckbreaker off the ropes to pin him giving FinJuice the lead in the tournament.

Nagata and Nakanishi get their first win of the tournament as Nagata pins Fredericks with the Exploder Suplex.

Kojima pins Honma with The Lariat.

Archer brutally puts Nicholls away with the EVD Claw. Suzuki attacks the official after the match.

Tama Tonga and Tanga Loa versus Kenta and Yujiro Takahashi

In a battle of Bullet Club, Tonga pins Takahashi by draping his legs over the ropes for leverage. The teams hug it out.

Evil and Sanada versus Bad Luck Fale and Chase Owens

Sanada escapes a Package Piledriver to get the three count on Chase Owens with a bridging roll-up.

Shingo Takagi and Terrible versus Zack Sabre Jr and Taichi

Shingo scores the two points for his team by pinning Taichi.