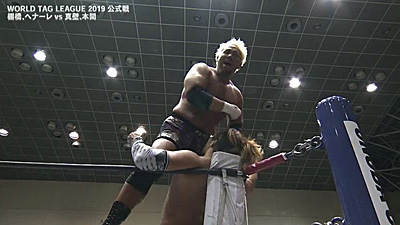 The main event started off with Sabre Jr. punching Ishii a couple of times. Ishii delivered one forearm to knock Sabre Jr. off his feet. Sabre Jr. made a tag to Taichi who stomped on Ishii’s hand to take away his powerful forearm shots. Sabre Jr. returned to the ring to work over Ishii’s wrist. Ishii made the tag to YOSHI-HASHI who cleaned house with a series of high impact moves. Out of nowhere Sabre Jr. locked in a wrist lock to take advantage in the match.

Ishii and Taichi exchanged numerous strikes on each other. Ishii stopped striking and German suplexed Taichi. However, Sabre Jr. and YOSHI-HASHI returned to the ring to battle each other. Taichi power bombed Ishii for a near fall. Ishii returned to his feet and delivered a headbutt on Taichi. Ishii followed up with repeated strikes and a headbutt on Taichi for a near fall. Ishii hit a brain buster on Taichi for the win via pin fall. Tomohiro Ishii & YOSHI-HASHI defeated Zack Sabre Jr. & Taichi.

In the opening match on the card, Juice Robinson & David Finlay defeated Hirooki Goto & Karl Fredericks. Robinson and Fredericks chain wrestled in the center of the ring. Fredericks locked in a hammer lock and Robinson quickly went to the ropes. Robinson was able to dominate Fredericks and dropkicked Robinson. Fredericks tagged in Goto while Robinson tagged in Finlay and both men battled back and forth. Robinson hit Fredericks with a punch and Finlay followed up with a cutter to win the match.

Jeff Cobb & Mikey Nicholls beat Toru Yano & Colt Cabana. The match started off with Cobb shoving Cabana to the mat. When Colt returned to his feet, he asked Yano to tag in. Yano declined and Cobb dominated Cabana. Colt eventually tagged in Yano and faced Nicholls and both men went back and forth with a series of moves. Cobb finally got ahold of Yano and hit the Tour of the Islands to win the match.

Satoshi Kojima & Hiroyoshi Tenzan defeated Shingo Takagi & El Terrible. They kicked off this match with Takagi and Tenzan delivering shoulder blocks to each other with neither man going down. However, Takagi eventually knocked Tenzan to the mat. Terrible and Takagi double teamed Kojima with a clothesline. Kojima was able to hit a DDT out of nowhere to make a tag to Tenzan who cleaned house. Kojima returned to the ring and hit machine gun chops to both Takagi and Terrible. Kojima hit the lariat to pin El Terrible and win the match.

KENTA & Yujiro Takahashi beat Yuji Nagata & Manabu Nakanishi. KENTA took Nagata in the corner and delivered a series of strikes. KENTA whipped Nagata into the turnbuckle and Nagata came out of the corner to clothesline KENTA. Yujiro delivered many chops to Nakanishi who didn’t flinch. Nakanishi slammed Yujiro and followed up with a cover for a near fall. KENTA delivered strikes to Nagata. Nagata was able to block one of the strikes and take advantage in the match. KENTA and Yujiro hit a double DDT for a near fall on Nakanishi and Yujiro followed up with another DDT for the win.

Minoru Suzuki & Lance Archer defeated Chase Owens & Bad Luck Fale. Suzuki and Archer ran into the ring and attacked Owens and Fale before the bell. Suzuki threw a couple of guard rails on Owens and hit them with repeated chair shots. When both men returned to the ring, Owens raked Suzuki’s eyes to gain the upper hand in the match. Archer and Fale exchanged power moves. Fale looked quicker than any of his previous matches. Archer and Suzuki double teamed Owens for a near fall. Archer applied the claw on Owens’ head to pin him and win the match.

Jay White & Gedo beat Bushi & Tetsuya Naito. White trash talked Naito before the bell and exited the ring leaving Gedo in the ring with Naito. Bushi was about to dive onto Gedo but White cut Bushi off to save Gedo. White and Gedo double teamed Bushi and kept him in their corner. Naito repeatedly stomped on White to gain an advantage in the match. Naito followed up with a DDT. Bushi ran into the ring to attack Gedo and the pace of the match picked up. White hit the Bladerunner on Bushi and dragged the legal man Gedo on top of Bushi for the win via pinfall.

Hiroshi Tanahashi & Toa Henare defeated Togi Makabe & Tomoaki Honma. Tanahashi grounded Makabe early in the match. Tanahashi and Henare kept Honma in their corner to work over him. They put Honma in a double Boston Crab in the middle of the ring. However, the referee administered his count because Henare wasn’t the legal wrestler. Henare let go of the Boston Crab at the count of four. Makabe dominated Tanhashi and Tanhashi hit a desperation dragon screw leg whip to allow him to make a tag to Henare who cleaned house. Tanhashi hit the high fly flow on Honma to win the match via pinfall.