For more than two decades, “The Man Beast” Rhino has gored his way through nearly every major promotion in North America — from ECW, WWE, TNA. ROH, or NXT, he’s been there and back. Now in his third stint with IMPACT Wrestling, Rhino made his return to the company after a head-turning rumor revealed WWE’s future plans for him. The intent was apparently to place Rhino on the sidelines with a contract that was double the previous value — a deal which he declined.

During the expiring days of his WWE contract (where it was spelled Rhyno), Rhino appeared at Slammiversary 2019 disguised as a hooded man to attack Michael Elgin. At a later IMPACT taping, his identity was officially revealed and so was his post-WWE destination. IMPACT Wrestling continues to use Rhino as an active roster member, contrary to his prior position. He has been colliding with the likes of Michael Elgin, The North, Rob Van Dam, and more. Here’s my interview with the 44-year-old Rhino before an IMPACT taping at St. Clair College in Windsor, Ontario, on Saturday.

Regarding your WWE departure, what details can you give about why you left and what influenced your decision?

Obviously I want to start out by saying it was a great opportunity to work with WWE once again. You know, there’s a lot of talent there, and they had to cycle in the talent, and matches, and stuff like that. I enjoyed being on the road, so I wanted to be on the road every weekend — you know anywhere from three to four days a week. I wouldn’t have been able to do that with WWE because of the large talent roster that they have. So I figured I’d depart, go to IMPACT, and then pick up a lot of independent dates too.

How accommodating is IMPACT’s schedule to your career now?

With the likes of Scott D’Amore and Don Callis working backstage, what’s their input on characters and IMPACT’s creative process?

They just let the talent kind of do whatever they do, and they just book the matches around that. So they’ve got a great sense for the wrestling business and a sense of what the wrestling fans want and what matches they’d like to see. They’re definitely in touch with the wrestling fans.

How can you compare that to other companies such as WWE?

Well there’s a different formula with the other companies — you know whether it’s WWE, whether it’s AEW, or NWA. I mean the wheel…you don’t want to try and reinvent the wheel. There’s different wheels out there, and different wheels will work for different terrain. Obviously, if you’re going through the streets of Detroit and Michigan, you’re going to need a more durable wheel! Now, if you’re coasting the beautiful, coastal — I think it’s Juan or something like that in California — you can use a nice, very expensive, beautiful rim where you don’t have to worry about the salt and the potholes, you know. So it’s just a different terrain, different type of wheel you’ll need. So don’t try to reinvent it, just try to do your own thing which is a different formula.

With guys like you, Rob Van Dam, Sabu, and Tommy Dreamer, what are you all looking to do in this stage of your career and this era here in IMPACT?

Well we have a lot to offer — we have years of experience to offer. Just passing on what we’ve learned over the years to the next generation. Helping them get over in the ring, or by discussing things with them to try and help them get over. Whether it’s angles, t-shirt ideas, what to do and try on live events and all that stuff. 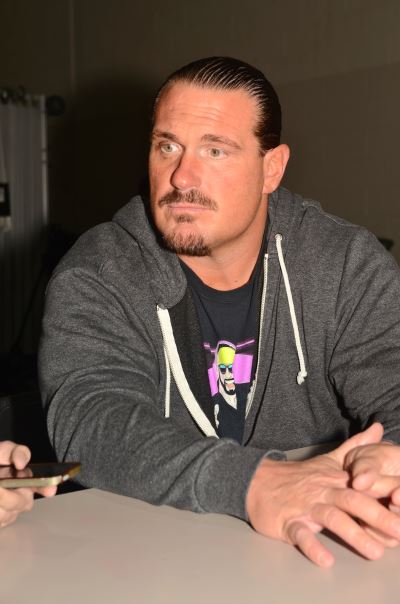 Rhino considers a question from SLAM! Wrestling on Saturday. Photo by Brad McFarlin