Jordan Myles (AKA: ACH) is engaged in a war of words with his current employer, the WWE.

At issue is a t-shirt the WWE designed for him and his character but was discarded. Some say the shirt appears to be offensive Sambo doll imagery. Others say it is just in reference to Myles’ smile, which the NXT announce team has commented on.

Over the weekend, Myles posted an image of the shirt and a series of Tweets stating: 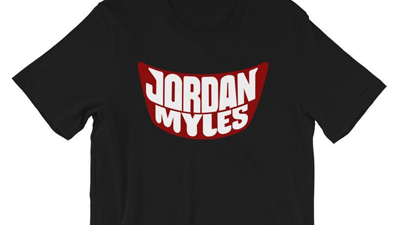 The t-shirt design in question.

“I will keep posting this till my voice is heard. I’m not sorry for anything I say or do. Representation is important. If this is @VinceMcMahon & @TripleH “vision” of me then this is a slap in the face to EVERY African American performer, fan, and supporter.”

“I’ve used this shirt as fuel. I knew the shirt existed and my soul hasn’t been able to rest properly since I’ve laid eyes on it. My voice will be heard… my true opinion will be heard.. and MY PEOPLE will have their moment.”

Myles also stated the shirt represents “what’s wrong with America and the wrestling industry” and asked supporters on Twitter to turn their profile photos black and white in protest.

To offer more proof of his accusations, Myles posted an email in which Landon Baker, the WWE’s digital designer and Creative Services Talent Coordinator, writes that Triple H attended a meeting to revise the logo and wanted the shirt to be more “teethy”. The email dated September 11th of this year.

In his Tweet, Myles tells Baker to go f—ck himself. 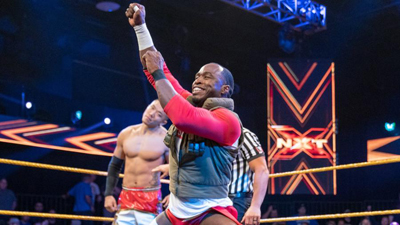 The WWE has issued an official statement saying Myles approved the design at the time.

“Albert Hardie Jr. (aka Jordan Myles) approved this t-shirt for sale. As always, we work collaboratively with all of our performers to develop logos and merchandise designs and get their input and approval before proceeding. This was the same process with Albert, and we responded swiftly once he later requested that the logo/t-shirt be redesigned. No t-shirts were sold,” said the WWE.

“THE WHOLE WWE SYSTEM IS FRAUD! THEY CREATED THIS SYSTEM WHERE YOU CANT TRUST ANYONE, YOU GROW COLD, AND YOU GROW APART FROM WHAT YOU LOVE THE MOST! The fact that @HulkHogan is still employed after giving the locker room an apology for being caught says enough,” wrote Myles.

He also called out RoH’s Jay Lethal and slammed that promotion too.

“F—k RoH too. They only allowed ONE African American to be the “Top Guy” while guys like @cedricalexander TD, @malcolmvelli and myself had to chase this visible carrot and stick. Name another African American who has reached great heights there other than this Uncle Tom,” wrote Myles in a deleted Tweet in which he posted a picture of Jay Lethal.

Lethal and RoH have not responded to Myles’ statement.

Since signing with the WWE Myles won the NXT Breakout Tournament, challenged Adam Cole for the NXT Championship but did not win the title.