If you’ve followed the Quebec wrestling scene of the 1980s, Giant Gustave is a name that certainly rings a bell. Otherwise, you probably saw him in one of the many television projects he participated in. 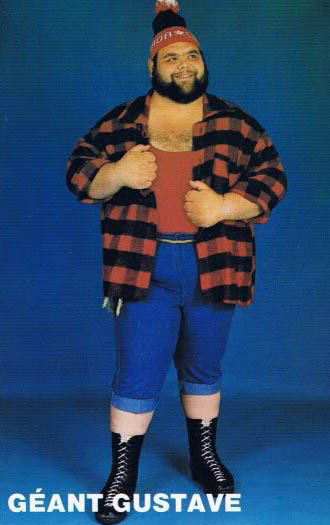 Ouimet, who was only 58 years old, was driving with his wife on Barré Street in Chambly, Quebec, where he was staying, when he lost control of his vehicle and collided with a house. According to the coroner’s office, Ouimet had a heart attack while driving, which caused the loss of control and the accident. He died instantly. His wife, Carole Daigneault, was hospitalized but is now out of danger.

Born in Longueuil on April 25, 1961, Ouimet made his wrestling debut in the mid-1980s after being trained by Édouard Carpentier.

“I remember that he came to see us at our wrestling school, Brito-Bravo, with his brother Denis,” recalled former wrestler and promoter Gino Brito. “I looked at him, I saw the size of his hands, he had hands like André the Giant! So I thought there was probably money to be made with him. He told me that he had done a few matches already.”

Under the name of the Giant Gustave and dressed as a lumberjack, a very popular character in the history of Quebec wrestling, he began to work for International Wrestling.

That’s when he had a lucky break.

Maurice “Mad Dog” Vachon, who, along with his brother Paul, had played a lumberjack early in his career in Calgary, decided to make him his protégé. It’s should be no surprise coming from Maurice, who had helped so many Quebec wrestlers such as Pat Patterson, René Goulet, Gilles Poisson, Rick Martel, Armand Rougeau and Richard Charland to name a few.

“That was all my brother, always wanting to help someone,” Paul Vachon said. 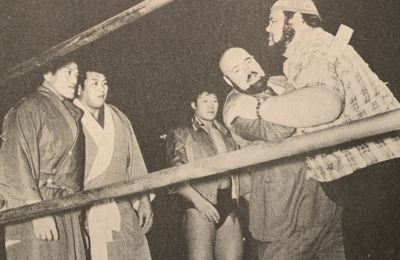 In October 1985, Maurice asked Paul to accompany Gustave to Japan. Through Tokyo Joe, he was booked with New Japan Pro Wrestling. But before he left, Maurice had the idea of filming Gustave pulling buses, much like the Great Antonio did so often, and sending this promotional tape to Japan. His arrival got extra hype through the gimmick.

From October 18 to 30, 1985, Gustave wrestled in Japan, only in handicap matches, facing a host of young wrestlers, who would become more famous later in their career, such as Shinya Hashimoto, Masa Chono and Keiji Muto. He won all of his matches or lost by disqualification. This would be his only tour in the Land of the Rising Sun.

“Maurice wanted him to be seen in Japan,” Paul recalled. “He wasn’t the best in the ring, but in Japan, promoters were often looking for big guys like that. He was a good guy, so Maurice wanted to help him.”

It was certainly a career highlight. Back in Quebec, he would take part in Maurice’s retirement tour. In an interview to promote the tour, Vachon made sure to talk about Gustave.

“Giant Gustave, whose hands are bigger than those of Jean Ferré. The largest French-Canadian on Earth,” Mad Dog said.

He was over 6 feet tall and weighed about 550 pounds. However, his hands are what everyone remembers. “My hand was lost in his,” Brito recalled. Although several media outlets reported upon his death that, according to his casting agency, he held the World Guinness record for the largest hands in the world, a title he even had when he was wrestling, Paul Vachon sheds light on the subject.

“It was a gimmick, a way to put him over,” he admitted. “He really had large hands, but it’s not like someone from the Guinness Book of Records came to measure his hands.”

After the closure of International Wrestling, Gustave worked in Ontario and for a few promotions in Canada and the United States, but his career never really took off. According to Gino Brito, he was not made for this business, which can be cruel sometimes, even more so in the 1980s.

“He was wrestling Tony Ricco one night and Ricco started shooting on him. Gustave didn’t defend himself,” Brito remembered. “After the match, I went to see him and he told me he didn’t need that. I told him that if he didn’t need that, to let me know right away. I was disappointed. I would have liked to book him against the Giant (Ferré).” 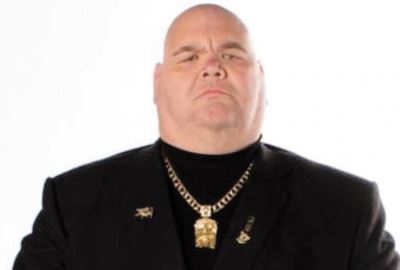 A recent shot of Gustave Ouimet.

FROM WRESTLER TO ACTOR

Ouimet became an actor, debuting in 1989. Both in Quebec and abroad, both on television and in movies, he landed several roles, mostly as bikers or criminals. He has starred in X-Men Apocalypse as Blob, The Countries from Above, No Holds Barred, as well as many Quebec shows and commercials.

A few years ago, Bertrand Hébert had tried to interview him for one of his books on professional wrestling, but Gustave refused. “He seemed bitter about the business,” recalled Hébert.

His death made headlines in Quebec, mainly because of his acting career. On social media, many praised him, since he was well liked by his peers.

Giant Gustave joins the list of former Quebec wrestlers who died in 2019. Michel Dubois, Jacques Rougeau Sr. and Fernand Fréchette have all passed away this year.

Details of his funeral are not known at this time.