While watching “Total Divas” is never really cause for celebration, this week’s episode is a particular downer, with none of the girls ending up happy by the time the credits roll. Nattie, Sonya, and Carmella each ride the emotional roller coaster, ending the night off in various degrees of disappointment and sadness. Which should really be the slogan for this show overall. Check out the recap for all the details.

Ronda and Travis are talking about which one of them is more smelly. They then make up love songs for one another, and if that’s not a commercial for divorce, I don’t know what is.

Sonya goes to Tampa to visit her ex-girlfriend, Arianna for Valentine’s Day. Arianna is hot, and her mom Deanna is too. This has the setup for a great adult movie – especially when Sonya gets handsy on the way to the car – but sadly, this show airs on E! and not Skinemax. At dinner, Sonya tells Arianna she wants to resume dating, and Arianna agrees.

Nattie throws a birthday party for her mom, and things get awkward when both Carmella and Nia show up, despite Nattie assuring Carmella that Nia wasn’t planning on going. Carmella isn’t going to ruin the party with bad blood, so tries to make nice with a hug, but Nia doubts the sincerity.

Sonya arrives with Arianna, and the speculation starts about whether they’re back together. While others notice that Sonya seems happier than before, Carmella is worried because she knew that Sonya and Arianna had broken up because of Sonya’s crazy work and travel schedule. She talks with Sonya, and she’s cool with it.

Then Carmella drops the news that she’s in love with a co-worker, but won’t divulge who it is. Carmella’s been keeping it a secret because she’s already been burned in a public romance with Cass.

Nattie makes a speech about her mom and how this is the first time in 40 years that she hasn’t celebrated a birthday with Jim “the Anvil”. Trinity checks to make sure Nattie is doing okay, and Nattie breaks down in tears.

Sonya visits Carmella’s hotel room, and Carmella tells her that she’s dating Corey Graves. The problem is that Corey’s still married, though he’s in the process of being divorced. 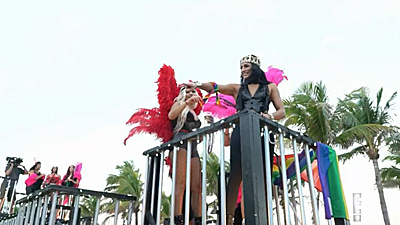 Sonya’s been invited to have her own float in the Pride Parade, so she takes Nattie and Carmella to the float store to check it out. Trinity shows up too, and everyone’s happy that Sonya has the forum to speak up about Pride and her journey. They decide to design a wrestling ring themed float, and everyone’s excited about the idea.

At RAW, Alexa Bliss makes the announcement that the women’s tag team championship will be introduced at the Elimination Chamber PPV. All the girls are thrilled except Nattie, who doesn’t have a tag team partner, since Ronda’s gone on to singles glory. Nattie tells everyone that she wants to be part of the match, and says she’s going to pitch an idea that will get here there. Nia kinds of rains on her parade, saying that Nattie doesn’t have to be part of everything, and Nattie’s like, “bye, Felicia.”

Nattie makes her pitch off-screen, but her idea was flat-out rejected. Nattie starts bawling, so she decides to leave.

At home, Ronda is hanging out with NXT star Marina and her kid. Travis finds the kid cute, and tells Ronda that he wants one of her own. Before they can get started on that, Ronda has to take a call from Nattie who’s whining about not being needed. Ronda talks her off the ledge somewhat, but after the call, is still worried about Nattie. Ronda feels Nattie’s throwing herself too much into work to bury the grief she’s still feeling about losing the Anvil. Ronda then says that’s something her own mother did when Ronda’s father killed himself.

Backstage at the PPV, Carmella shows Sonya a social media post where Corey Graves’ wife calls out Carmella for breaking up her and Corey’s marriage. The internet trolls come out guns-a-blazing, and Carmella starts trending as a homewrecker, which understandably upsets her. She and Graves talk backstage, and Corey has no answer as to why his wife did what she did. Graves is equally upset about it, but has no words that will make her feel better.

Nattie’s watching the PPV at home while all the other girls are making history in the Elimination Chamber match. Her mom tries to pep her up, but Nattie’s in a funk.

During the match, after a Tower of Doom spot, Sonya feels something go wrong in her shoulder – she feels a lot of pain, but guts it out to finish the match. After the show, she goes to the trainer, and he tells her that she has to refrain from any physicality, as her shoulder is messed up. She’s worried that she may be out for a long time.

Sonya’s family and Arianna join her for the Pride Parade. On the way, Sonya gets the news that she has not been cleared to perform in the ring. At dinner, she calls Mandy Rose and lets her know about the situation.

The next day, Sonya and a few of the girls work on the float. Carmella is there, and she tells everyone that Nia’s been chirping to Nikki Bella, twisting Carmella’s words and making it seem as if Carmella has been blasting Nikki (re-read last week’s recap for the full details of that nonsense). Carmella’s just had a lousy week, what with the tabloid gossip about her and Corey.

Sonya can’t do anything physical, so everyone tells her to go home, and they’ll work on the float. She’s not thrilled about the idea, but she relents.

Between Carmella being slagged online and backstage by Nia, and Nattie being so emotional about her dad and her losing her PPV spot, this must have been considered a “very special episode”, because the show ends with a graphic for the suicide hotline. And that’s the first good thing this show’s ever done.

Bob Kapur wants to wish everyone a happy Thanksgiving. Email him your leftovers at at [email protected]