Mat Matters: Can the WWE recover from the Hell in a Cell train wreck?

For the first time in a long time the WWE has direct competition in the newly-established AEW. After AEW beat NXT in the first week of the new ratings war you would think WWE would stand its ground, tape up fists even tighter and come out swinging.

Rather than that, we got the debacle now known as Hell in a Cell 2019. 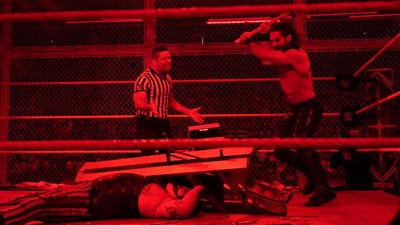 Seth Rollins wants to be your sledgehammer so why don’t you call his name?. Photo: WWE.

As @muffinRobGoth wrote on Twitter riffing on the Firefly Fun House theme song: “We’re really glad that you’re our friend and this PPV had a really s—-t end.”

Problems for the show began on Raw and continued throughout the week to Smackdown, debuting on FOX, when fans were left wondering why only four matches had been announced for Hell in a Cell. Not listing the entire card days in advance was reminiscent of how ECW haphazardly operated in its dying days — something the WWE chastised it for at the time.

With the atrocious card now in the record books we know why the card was kept as ambiguous as could be. Apart from the WWE Raw Women’s Championship match and Daniel Bryan and Roman Reigns facing Erick Rowan and Luke Harper in that bonkers Tornado tag team match, fans were treated to recycled matches which have already played out on Raw and Smackdown numerous times.

The final straw, though, was the atrocious Hell in a Cell match for the WWE Universal Championship. Even though the WWE is the McDonald’s of pro-wrestling and there isn’t anything wrong with that if you take it for what it is, that Hell in a Cell match was an insult to the intelligence of any fan.

Right out of the gate the WWE angered many by tinting the entire bout in an unforgiving red light. Despite many who were either watching the match live from the Golden 1 Center in Sacramento or viewing it from home taking to social media and pleading for the lighting to be switched off, it never was.

The bout itself was fine until Rollins walloped The Fiend with 5,000 flying knees to the head, Stomps, Pedigrees and guided missile launches. Nothing would keep him down for the three count.

That kind of booking is littered with problems not only for The Fiend character by Seth Rollins as well. Before Hell in the Cell, The Fiend was without a doubt the premiere property in the WWE and one of the hottest acts in all of wrestling today. After flubbing his push so many times, the bookers finally got Wyatt on the right track with his current incarnation.

Portrayed as completely unstoppable in Hell in a Cell, how does the WWE go forward with the character though? About the only thing it can do now is proclaim that the Hell in a Cell itself gives The Fiend some unimaginable, supernatural power just like the urn did for The Undertaker during his career. Nothing else makes sense going forward. How are we supposed to accept The Fiend being pinned with a Randy Orton RKO, a Roman Reigns Spear, a Mysterio 619 or a Kevin Owens Stunner after what we saw him survive in the Cell?

Rollins, who has been sinking in popularity since he has become Vince’s golden boy and participated in the WWE’s version of the Dating Game with Becky Lynch, also came out of Hell in a Cell looking even worse than he did going in. The most potent moves in his arsenal could not put away The Fiend and he had to resort to over-the-top, some might say questionable tactics to win the match, even though the Cell is supposed to be “anything goes” as superstars like The Undertaker, Mankind, HHH and others have proved in the past.

I mean, The Undertaker threw Mankind off the top of the Cell and the match continued for crying out loud.

I have never been a fan of outrageous angles. Wrestling already asks us to suspend our disbelief each and every week. To have superstars try to commit vehicular homicide, blow each other up, fall off the roof of Cobo Hall, be electrocuted at Halloween Havoc, give birth to a hand or take a ride with Katie Vick makes a joke out of the business. The best angles have always been the ones that are grounded in reality.

Is it no wonder that the frustrated fans in the Golden 1 Center resorted to chanting “AEW!” and “Restart the match!” and demanded a refund at the conclusion of the disaster that was Hell in a Cell 2019?

Aside from the fans being cheated, it is a shame to see Bray Wyatt take five steps backwards just as he was finally taking huge leaps forward with his character and career. Fans desperately want to cheer for him and the WWE had finally given them a reason to. How much damage HIC did to The Fiend character remains to be seen. To see The Fiend go down in flames on Sunday night brought back the memories of the WWE bungling all sorts of gift-wrapped angles from the nWo to the Invasion.

The WWE is the grizzled veteran in this skirmish against AEW. They are supposed to know better, do better and be better. As one who wants every single promotion to succeed beyond their wildest dreams so that fans have more choice and more variety and the talent themselves can negotiate better contracts for themselves as well as their families, I am trusting that the WWE will dig itself out of the hole they have dug for itself but with Tyson Fury now in the WWE and other such nonsense one just has to wonder how long will it take before the message the fans are sending will be heard by those who work in Titan Towers.