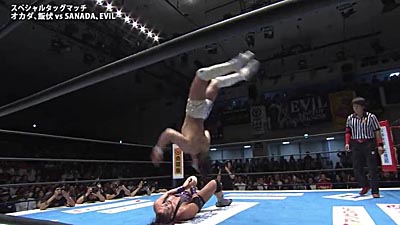 The more the merrier was the theme of NJPW’s New Japan Road with six of the seven matches being tag team wars.

In a special tag team main event match, it was Kota Ibushi and current IWGP Heavyweight Champion Kazuchika Okada teaming up to face the Los Ingobernables de Japón veteran pairing of Evil and Sanada who have won the IWGP Tag Team Championships twice.

Ibushi countered Evil’s strength early on with a series of drop kicks. Okada tags in ignoring Evil and pointing at Sanada to enter the ring. Sanada obliges by flipping over the ropes. Both superstars play to the crowd to see who can get the bigger chants. Surprisingly, the crowd seems divided.

Sanada dodges three Okada drop kicks hitting him with one of his own. All four men fight on the floor. Evil rams Ibushi into a table. Sanada bounces Okada’s head off the ring apron.

Evil takes over hammering on Okada. He pounds the mat before hitting Okada with a cannonball of sorts. Sanada lowers the boom on the champion who doesn’t seem very impressive thus far.

A powerslam and a moonsault gets Ibushi a two count on Evil. Evil powers out of a piledriver attempt, however, Ibushi transitions into a German Suplex almost pinning Evil. As Ibushi runs in for a Bomaye, Evil catches him with a clothesline. Evil hits Darkness Falls on Ibushi. Okada makes the save just in time to halt the pin. Evil dodges Kamigoye. Sanada dives into the ring drop kicking Ibushi. Okada does the same to Sanada knocking him out of the ring. Okada and Ibushi whip Evil in for a double drop kick. Evil holds on the ropes. Okada and Ibushi hit empty air. Evil eliminates Okada from the situation with Everything is Evil. Ibushi pounces nailing Evil with a running knee strike. Sanada slams Ibushi with a TKO. Evil pins Ibushi with Darkness Falls.

In another stand-out match, it was Tiger Mask and Jyushin Thunder Liger joining forces against Suzuki-gun (Yoshinobu Kanemaru and Minoru Suzuki).

It is safe to say that Liger and Suzuki just don’t like each other. Things break down right away with Suzuki-gun charging at the faces, taking things to the floor.

Suzuki chokes out Liger with a steel chair. Suzuki takes an umbrella from a fan. He stabs Liger with the pointy-end over and over again. Ouch!

Back in the ring, Suzuki attempts to rip off Liger’s mask while Kanemaru tampers with Tiger Mask’s. Liger gets in Suzuki’s face. The two trade shots. Suzuki laughs off Liger’s blows.

The official has to check on Liger who is stunned following a haymaker. Kanemaru put the boots to a dazed Liger.

While Kanemaru distracts the official, Suzuki puts Liger in the Tarantula. It is Suzuki’s turn to get the official’s attention. Kanemaru lays Liger over the apron giving him a running kick to the head.

The crowd starts cheering for Liger to make a comeback as Suzuki inflicts more and more punishment. Liger finally tags Tiger Mask into the match. He runs roughshod over Suzuki-gun. Kanemaru has to reach for the ropes to break a leg lock. Tiger Mask tombstone piledrives Kanemaru.

Both men are eventually separated. It isn’t long before they are at each other’s throats again rolling around on the mat. Smashing a steel chair on a ring post, an irate Suzuki heads to the back.

A battle of the two NJPW bruisers. Henare puts up a valiant fight. He takes 3,567 forearms to the head, continues firing back and refuses to fall. He even kicks out of a Pumping Bomber. Made in Japan pins Henare. Tajagi checks on Henare after the match then kicks him in the head. The fans in attendance cheer for Henare as he heads to the back.

Goto beats the tar out of Gedo pinning him with the GTR. Gedo stands over Gedo as a he calls out Jay White.

Bushi gets the win with MX. Taichi and Naito share some words after the match.

Taguchi clobbers Honma with the Funky Weapon. Yano rolls him up to retain the titles.

John Powell is a veteran entertainment journalist, the Editor-in-Chief and one of the founders of SLAM! Wrestling.