Leon Ruff: From Skulk to champion in EVOLVE

“The Skulk” began as an entourage of trainees of AR Fox. Serving as a ringside hype crew, the WWA4 students accompanied Fox to his matches, and eventually became members of the EVOLVE roster as well. One Skulk member however, has risen high above the rest. Leon Ruff broke through the proverbial glass ceiling in EVOLVE, becoming the company’s top underdog. Teaming with his trainer AR Fox, Ruff captured tag team gold from The Unwanted (Eddie Kingston and Joe Gacy), in front of thousands on the WWE Network. The success for the 22-year-old Ruff didn’t stop there, as Ruff and Fox main evented EVOLVE 133 in Livonia, Michigan, on August 24th, surrounded by plenty of friends of family of Ruff’s. 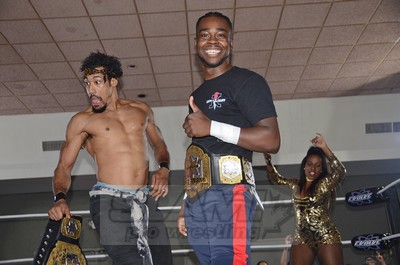 It’s all thumbs up for Leon Ruff and his partner AR Fox. Photos by Brad McFarlin

The duo continued their title reign defeating Matt Riddle and Curt Stallion at EVOLVE 134 the following day in Chicago.

Ruff’s popularity is only starting to grow. “Lenny Wrestling,” at 5-foot-7 and 150 pounds, is an influential figure and champion. He took some time out from his own entourage in Livonia to answer a few questions from SLAM! Wrestling.

Every time EVOLVE comes to Livonia, your entire family comes to support you. How has that support helped your wrestling career?

It helps me because it pushes me to do better — because I see how happy they are, I see how supportive they are, and how proud they are. And I wanna keep giving them that feeling every time they see me wrestle and every time they hear about my wrestling. So them being here lets me know that they’re behind me a hundred percent, and it means the world to me.

You’re the breakout star of The Skulk — what made you stand out from the rest of your crew?

I think what made me stand out was my smile and my personality. The move set was, you know, some of it was new and creative, but I think it was the personality. And everyone got that feeling like, when they watch me, they’re like, “We know he’s enjoying what he’s doing. We know that he really loves this”, and everyone can gravitate towards that — I feel. 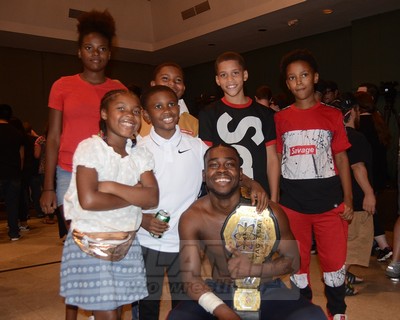 Leon Ruff and some of his friends and family in attendance in Livonia.

Being from Detroit, how did you get your start with AR Fox in Atlanta?

I moved from Detroit to Georgia, and I looked at wrestling schools, and it was two of them — and I saw the school that Fox trains and at another school. When I was, you know, writing down like the pros and cons of which one school had that the other didn’t have, AR Fox’s school had more I could benefit from than the other school. So that’s how I chose the WWA4.

You’re heavily influenced by the straight-edge lifestyle — what influenced your decision to be straight edge and have it involved in your wrestling career?

I first heard of straight edge when I was a kid skating, and I met a kid, and he was showing me how to skate. And he told me how he doesn’t drink, or do drugs, and I thought that was so cool. I’m in the hardcore scene — a lot of people in the hardcore scene are straight edge. And I see so many people, as you know, like rappers or very influential people talking about drugs or drinking, and I wanted to be that person that said, “Hey, you don’t have to do all those things to have a good time. You don’t have to do any of that, you know, you can live a clean lifestyle.” That’s basically how it came in wrestling.

You were featured on EVOLVE’s WWE Network special — what impact do you hope you left on your new audience?

I hope I left them wanting more. Like, “Oh, we wanna see this kid again!” And I hope I had them thinking, “Where are we gonna see him?” or ,”How quickly can we see him again?” I wanted them to look at me and just see that a kid from Detroit who set out to achieve a dream is living his dream. And I wanted them to know, “I can also live my dream as well if somebody like Leon can do it.” 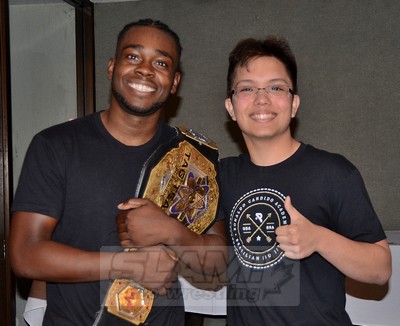