NJPW Destruction In Kagoshima: KENTA vs. Ibushi settled but WK14 briefcase is not 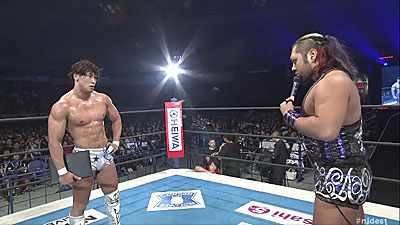 With Kota Ibushi claiming the annual G1 Tournament it’s time to see if he’ll still main event at WrestleKingdom 14. Standing in the Golden Warrior’s Way is KENTA as both will wrestle over the WK14 Main Event briefcase in tonight’s main event.

KENTA blasts Ibushi, grabs the briefcase and unloads. KENTA takes the contract out and destroys the briefcase. He grabs the microphone and says the briefcase belongs to him and he will remake it with the Bullet Club theme. The bell hasn’t rung by the way. Red Shoes calls for a doctor.

After Ibushi convinces the medical staff he can compete KENTA is like a shark smelling blood, instantly going for the pin. Ibushi isn’t going down that easy in front of his home crowd and guts it out.

After a hard fought win to retain the contract rights to be in the Main Event at WrestleKingdom 14, EVIL shows up to confront Ibushi. He says he wants to challenge Ibushi for the briefcase. Ibushi agrees and it looks like the journey to Jan. 4, 2020 isn’t quite over for the Golden Warrior.

Great show of NJPW Japan Dojo (Uemura) vs. Los Angeles Dojo (Connors). This starts to get good when the two trade Shibata chops. There’s a great dropkick by Connors who goes for a Boston Crap on Uemura afterwards. He locks it in deep but Uemura makes it to the ropes to force the break.

Connors slaps the face of Uemura a few times and dares Uemura to hit him harder. Uemura obliges and tanks Connors’ slaps. The two trade blows and the fight spills to the mat. A deep arm drag and a double underhook by Uemura allows him to slap on the Boston Crab.

Connors can’t reach the ropes the first time, he tries another desperate climb but Uemura gets him back to the center and forces the tap.

Connors offers his hand but Uemura declines to shake. Connors walks off and Uemura celebrates his first win the Young Lion Cup.

We have NJPW Japan Dogo (Narita) vs. Fale Dojo (Richards). Richards avoids a suplex and gets a move of his own for a two-count. Narita gets a picture perfect belly-to-belly bridge for the win. He now is tied atop the leaderboard with 8 points.

Shoto Umino faces off against Nakanishi and that goes horribly for the Young Lion. After mauling Umino, Nakanish tags in Fredericks but Umino hits a dropkick to buy time and tag in Taguchi. That earns Fredericks six hip attacks. He hits another, but Nakanishi tags in.

Nagata tags in and the two veterans go to work on each other. They trade forearms and Monster Morning gets the better. Out comes the “Hoo!!!” and a clothesline but Nagata kicks out. Nagata breaks out of a torture rack and hits a exploder suplex.

Out comes the arm hold but Fredericks breaks the submission. Henare and Tsuji tag in. Henare is in the Boston Crab and Fredericks tries to break the hold with a few chops but it does nothing. Henare gets up and the two trade shots. Henare hits Toa Bottom and this one’s over.

Both Henare and Nakanishi do the Haka pose and we now get into the real portion of the show.

The ring clears and Bad Luck Fale is the lone man in the ring. We get back in and chaos reigns for the entirety of the match. G.o.D. loads YOH up for the Magic Killer. SHO spears Loa, allowing YOH the quick rollup for the win.

Bullet Club doesn’t take the loss well and Tama Tonga cheapshots YOH. He gets a kendo stick and unloads on YOH before leaving. The winners finally get their hand raised after the Bullet Club leaves.

We’re told this is the last time Liger will wrestle in Kagoshima so Liger leads his team to the ring. Of course Suzuki starts off by cheapshotting his opponents, leaving Honma and Kanemaru in the ring. Suzuki decides to take Liger out of the ring into the fans and drop a few barricades on him. So yeah, no different from their previous encounter.

Liger tags in after a bit and he plays traffic cop. Suzuki-Gun is out of the ring and Liger goes for a pin on DOUKI. Suzuki breaks up the pin and tries to take Liger’s mask off. Suzuki then hits the ref and Liger with chair shots and the ref calls for a DQ.

Suzuki isn’t happy until he’s ripped Liger’s mask off and holds it in his teeth, flexing like a jerk. The Young Lions surround Liger and cover his face. The crowd is silent and the Young Lions offer Liger their shirts to cover up.

Liger comes into the ring and demands the microphone while he’s still covered by shirts. Liger calls out Suzuki and says he needs to get revenge. The fans chant for Liger as he’s accompanied to the back.

Great trading of running clotheslines by Goto and Takagi with Goto finally getting the better. That gives Okada the chance to hit SANADA with a Tombstone. He hits BUSHI with an elbow drop then calls for the Rainmaker. He unloads on BUSHI and gets the win for his team.

Okada stands over SANADA and hoists up his championship belt

Nasty outside spot with White Irish Whipping Naito into the barricade and then White doing the tranquillo pose. Around 10 minutes in Naito prevents a pinfall by kicking Takahashi. Takahashi gets a close two count on EVIL afterwards and then Switchblade avoids Naito’s tornado DDT.

EVIL calls for Everything is EVIL and gets the pinfall over Takahashi.

White tries to hit EVIL afterwards but Naito cuts him off. A destino is blocked by White and then a low blow by White while Red Shoes is getting Naito’s title. White starts yelling at Naito.

A great pre-match package to update everyone on why these four guys are facing off. Crazy high-flying to start with stereo planchas by the Birds of Prey.

Ishimori isn’t really a high-flying wrestler but he’s so quick it doesn’t matter. Unlike traditional criticism of the Young Bucks being they’re spot guys, nothing in this match felt like a spot. It was natural. It felt organic. El Phantasmo retains the titles by pinning with a CR II and I felt like this match could have gone another 10 minutes and I wouldn’t have complained. Great semi-main event by these four and I would love to see this rematch at WrestleKingdom 14 with some unique twist thrown in.