NJPW Destruction in Beppu: ZSJ is the new RevPro champ 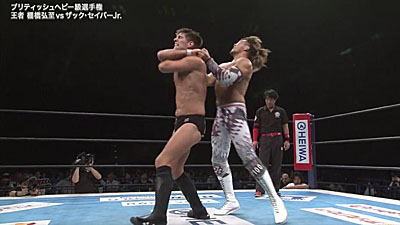 The night kicked off with a Young Lion’s Cup match. Both men started the match by shooting for takedowns. They ended up in the ropes and the referee broke them up. Fredericks gave an insult pat on the chest when they broke from the ropes. Tsuji took down Fredericks and worked over his leg. Both men returned to their feet and Fredericks delivered a desperation dropkick followed with a spine buster and a half Boston crab, and Tsuji tapped out.

The match started with a tentative collar and elbow lock up and quickly went to the mat. Both men scrambled to gain an advantageous position. This match was much quicker paced than the previous Young Lion’s match. Coughlin locked in the Boston crab on Umino in the middle of the ring. Umino slowly made his way to the ropes to force a break and the crowd applauded. Umino delivered a Fishermen’s suplex with a bridge to win the match.

The match started with all men brawling on the outside of the ring. When the dust settled Sho and Kanemaru battled in the ring. However, Liger and Suzuki brawled outside of the ring among the fans. Kanemaru dragged Sho back into his corner to tag Suzuki who dominated Sho. Liger ran in to break up the beating.

This match set up the two main events at Destruction in Kagoshima, which are Kota Ibushi vs. KENTA for Ibushi’s right to challenge for the IWGP Heavyweight Championship at Wrestle Kingdom 14 and IWGP Junior Heavyweight tag team champions El Phantasmo & Taiji Ishimori defending against Will Ospreay & Robbie Eagles.

All men brawled inside and outside of the ring to kick out off the match. Eagles and Ospreay dove onto El Phantasmo and Ishimori. Eagles and Ishimori returned to the ring and engaged in fast action, which was cut off by Bad Luck Fale running in to break it up.

This match is building to Shingo vs. Goto at Destruction in Kobe on the 22nd, as well as Okada vs. SANADA at King of Pro Wrestling. Shingo and Goto started the match off and the two exchanged a series of power moves.

BUSHI delivered a high flying move out of nowhere on Goto. Goto delivered a suplex on BUSHI to ground him and slowed the match down. SANADA put the paradise lock on Okada and released it with a drop kick to get a near fall. Okada hit a DDT on SANADA for a near fall. Goto and Shingo brawled and Goto hit the GTO on Shingo who rolled out of the ring. SANADA locked in the Skull End on Romero to win. After the match Goto and Shingo brawled outside the ring.

White and Owens doubled teamed EVIL. However, EVIL was able to tag Naito. Naito dominated Owens while trash talking White who was on the ring apron. White and Naito went to the outside and brawled. EVIL and Owens followed and brawled into the crowd.

When the match returned to the ring, White was dominating EVIL and all men again brawled on the outside. Owens attempted the package piledriver on Naito but EVIL broke it up. Naito hit the Destino on Owens for the win.

Ishii and Tama started the match off with Tama attempting to knock Ishii off his feet, which he failed at. Tanga Loa stuck his knee out to hit Ishii. The match went to the outside with the Guerrillas of Destiny dominating Ishii. They returned to the ring and worked over Ishii in their corner. Ishii kicked out of a couple near falls.

Winner: The Guerrillas of Destiny

Tanahashi shot in and took Sabre down to the mat. Sabre quickly returned to his feet and locked in an armlock. Tanahashi reversed it and Sabre rolled out of it. They continued chain wrestling with neither man gaining an advantage. When both wrestlers returned to their feet the crowd applauded them.

The crowd was chanting Tanahashi and he made a comeback by drop kicking Sabre. However, Sabre was able to lock in an armbar in the middle of the ring. Tanahashi fought out of it and hit the sling blade and the high fly flow. Sabre locked in the guillotine choke out of nowhere. Both men went back and forth with roll up pin falls. Sabre Jr. rolled up Tanahashi for the win and to become the new RevPro champion. After the match, Sabre said he has been the British ace for over a decade.