NXT’s move to USA, live and longer, all about opportunity: Triple H

WWE NXT has always been seen as the developmental brand for Raw and Smackdown. It’s been a place where fresh faces get their reps in the squared circle and truly harvest their craft. These wrestlers get to showcase their skills in front of a crowd in hopes that one day they would be called up to the main stage. This week, that perception will change for the better.

This Wednesday, September 18, WWE NXT will be moving to the USA Network, a major platform for the brand. Although this shift will provide more opportunities for the current roster, founder and senior producer Paul “Triple H” Levesque, revealed that other members of the WWE want to be a part of this move.

“If you are an athlete on Raw or Smackdown, you now see NXT as a viable option,” he said on a media conference call on Monday. Levesque confessed that there isn’t a week that goes by where he doesn’t get a call from wrestlers on the “red” or “blue” roster about NXT.

The USA Network has a larger distribution than NXT’s former home, the WWE Network, and the fact that NXT will now be a two-hour live show, piques the interest of those who may not have as much TV time as others.

One name that was mentioned in this mix was Kevin Owens. Could he make his way back to NXT? “There is no question that he is one of the best guys in the industry today,” he said. “I wouldn’t hesitate to jump all over that.” 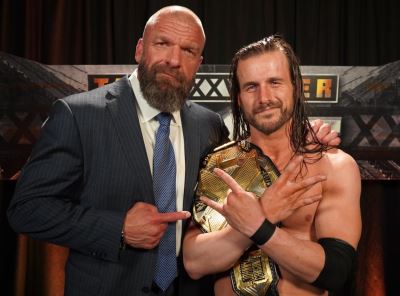 Levesque added that the more eyeballs that are on the athletes, the better.

That talent also includes those from NXT UK and the “205 Live” cruiserweight division. “I think you will see more back and forth between NXT USA and UK because [they], in a way, complement each other,” he said. Levesque believes that not only will this allow the performers to have more exposure, but it will also keep things fresh and exciting for the fans.

The WWE would like to use the Worlds Collide concept to keep the audience on their toes, similar to the ones that took place on January 26 and 27 at Royal Rumble Axxess this year. “The goal would be to have three distinct brands, Raw, Smackdown and NXT, to battle against each other and give our passionate fans more of what they want.” These events won’t impact any of the storylines, but will present a fun and interesting competition within the company.

The length of these NXT live episodes is also a new attractive feature. There has to be enough creativity to fill this time slot, but Levesque isn’t too focused on the amount of time they’ve been given.

“I don’t know about you, but if I’m looking at my watch at the end of the movie wondering how much time is left, that’s not a good thing,” he said. “We really want to build the storylines that will lead to the epic moment you see at the Takeover shows.” The aim is to produce meaningful content that will keep people engaged and excited for the larger events.

Along with the creative content, Levesque hopes to give all of the wrestlers the opportunity to prove themselves on television, something that has been a challenge with the current one-hour format.

“When you give an opportunity and allow more talent to shine, you’re creating competition for people to fight for those Takeover spots,” he exclaimed.

Having an environment where the wrestlers feel supported and appreciated is also something that Levesque wants to continue to foster. That is why the live programming will remain at Full Sail University in Winter Park, Florida, just outside Orlando, where the WWE Performance Center resides.

“I cannot state how incredible our partners are there. Their desire is amazing,” Levesque said.

The fans are also a big factor on why the events will remain at the university. Levesque explained that he wants to bring them along the ride for this journey and grow the energy that they bring to the venue every week. “It’s kind of become this little NXT fight club location. They are loyal and proud of it. As much as the talent wants to showcase themselves, the fans want to show off their brand.”

He added that the fans are as much a part of the new slogan, “We Are NXT,” as the wrestlers.