When Toronto’s Jody Threat first entered the world of professional wrestling, WWE was never her goal. She hadn’t even watched the product prior to breaking into the business. Yet with three years of experience under her belt, she found herself among more than 40 individuals involved in the global company’s first all-Canadian tryout earlier this year.

“All this is just so weird to me,” Threat said of the opportunity during SummerSlam week in Toronto, Ontario. “Three years ago, I didn’t even know what wrestling was.”

Threat’s introduction to the independent wrestling scene happened on a whim. During a night out with her sister, she came across a sign for ‘live pro wrestling’ — a show put on by Toronto company Superkick’d.

It was love at first fight. 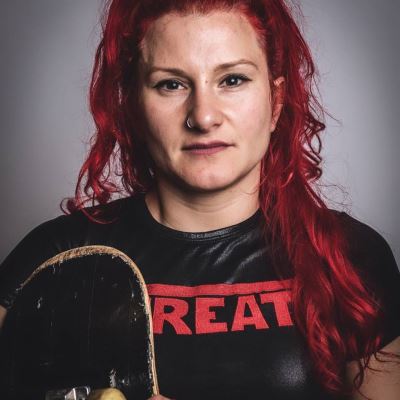 “It was a vibe that I had never experienced before, at least to that extent,” Threat said. “It was just so completely different. It really spoke to me and got me instantly hooked, and within 10 days I enrolled in wrestling school in Toronto.”

Her initial goal was to simply have matches on the independent scene. Nine months later, Threat graduated from training with the promotion that drew her to the business and branched out to other Ontario companies, with bookings in the United States not far behind. Threat now can be seen at Smash Wrestling, Black Label Pro in Indiana, and Glory Pro in the greater St. Louis, Mo., area, among others.

“To be invited to something that is so meaningful and large, it was mind blowing,” Threat said of the WWE tryout. “Once I succeeded with my goals to work the indies, the next goal was a tryout.”

Going into the two-day event, where she met both William Regal and NXT trainer Matt Bloom, she said she felt “very” prepared, especially with the timing of her first United Kingdom tour days prior and having the chance to talk to and train with NXT UK talent. Back in Canada, she said, she reached out to others for advice to be as prepared as possible.

“It was almost like the universe set me up for success,” said Threat, who has trained under Impact wrestling star Josh Alexander since he opened Canadian Strong Style Wrestling Academy in March.

“It was just really cool to be able to be welcomed into that opportunity, especially being the first only-Canadian tryout,” Threat said. “It’s neat to know that my name is on the radar on a bigger picture.”

Inspired by the skater lifestyle and the world of punk, Threat’s work ethic in the independent scene has been noticed, securing her that tour of the United Kingdom, as well as a dream match against then-NXT UK Women’s Champion Toni Storm, all in the span of a few weeks.

“I haven’t even had a second to sit and reflect on what happened,” Threat said days after she faced Storm at Smash v. Progress during SummerSlam weekend in Toronto. 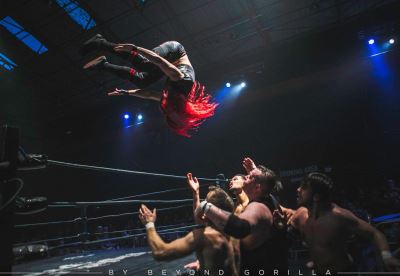 FROM MANIA WEEKEND TO A UK TOUR

In late July, Threat (“5-foot-4 and 160 lbs. of wildness”) went overseas for the UK tour — an opportunity that emerged through networking. She was in New York during WrestleMania weekend and brought her gear in case a spot opened up. And one did — she ended up on the Fight Club v. Destiny event.

“I wasn’t booked,” Threat said. “I was truly just there because people I was traveling with were booked … and they threw me in a scramble. I guess through the work that I did in the scramble, the promoter for Fight Club really [dug] what I was doing.”

One thing she brings to ring, she said, is intensity — from the moment her music hits.

“I just run in there with a burst of energy and pop in the ring and kind of let loose,” Threat said.

Threat considers her wheelhouse diverse, where she can go from having a “super indy” style match to a more traditional performance.

“I personally like to wrestle somewhere in the middle of that, and I think it just makes me comfortable with working with a variety of wrestlers,” Threat said.

After that, Fight Club: Pro owner Martin Zaki offered her an opportunity to wrestle in the UK. In the span of 11 days, Threat worked five shows and trained four times, making mention of how much Rickey Shane Page helped her on the tour.

The biggest takeaway, she said, was that “indie pro wrestling can work.” A few companies pulled resources to pay for her flight, and while she was overseas, she worked at Fight Club and Progress, among other promotions.

“[They were] OK with me working any promotion I want … Everyone just wanted the best for me, or at least that’s how I felt,” Threat said, “I was so welcomed in the locker rooms. People were throwing help at me.”

She also noted that it’s possible to be a full-time wrestler, not signed to a major company. 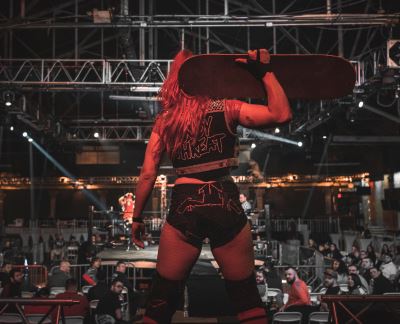 Being based in Ontario, Threat said she works with a lot of the same people and sometimes worries if she can “hang with the big dogs.” But her time in the UK allowed her to go head-to-head with new athletes.

“Besides [Canada’s Giselle Shaw], everyone else I had never locked up with ever,” Threat said. “Just being able to go with them, it was just really neat. It was reaffirming that, yeah, I can wrestle.”

Also reinforcing that belief was Threat’s role in the team that helped WWE Hall of Famer Trish Stratus shake off any ring rust prior to the seven-time women’s champ’s SummerSlam retirement match against Charlotte Flair.

“Someone she used to train with has a ring, and he’s involved with the Ontario scene in providing rings,” said Threat.” Sometimes when she needs to get that rust off, she’ll hit him up.”

That connection also knows Threat through her work in Ontario.

“It was neat to know that I was trusted enough [to be on that team],” Threat said. “Again, [it helped] reassure me that my skills are at a level where I’m trusted to work with someone of great importance like that.”

PREPARING FOR A ‘STORM’

One week before leaving for the UK tour, Threat learned that she would have her dream match against Storm. Threat admittedly didn’t know much about wrestling when she first got in the business, but began watching shortly after her training started. Storm stood out right away.

“Toni is just so different in how she moves,” Threat said. “I was very drawn to her right off the hop. She was one of the first female wrestlers I was really able to follow. Shortly after I started training, she was in the first Mae Young Classic.”

Storm competed in the inaugural all-female tournament, falling to Kairi Sane in the semifinals. She returned the following year to win the tournament, defeating Io Shirai. Now a member of the NXT UK roster, Storm defeated Rhea Rhipley in January to win the brand’s women’s title.

While in the UK, Threat also stepped in the ring for Japan’s promotion Sendai Girls’ Pro Wrestling, and Storm, who lost the NXT UK women’s title to Kay Lee Rae in August, happened to be on the same card.

“We didn’t work, but I was able to at least meet her and so it was really neat that when she came to Toronto, we already kind of knew each other,” Threat said.

It was Storm’s humbleness that stood out to the Toronto native.

“She was so cool and down to earth,” Threat said. “She’s sitting there holding the UK women’s WWE belt, and she’s just so cool, where as I’m new to the scene, and I’ve been wrestling less than three years… For her to give me that level of respect, it was awesome.”

The two also hit it off “really well,” according to Threat.

“I didn’t feel like I was beneath her at all,” Threat said. “She was a really great leader in the ring… The feedback after [the match] was really positive.”

But becoming Jody Threat — an “amped up version” of her true personality — caused some initial hesitation.

“Skateboarding is something that is so special to me, and I put it aside when I started wrestling,” Threat said. “I didn’t want to bring that world in this world.”

But she stuck with it and said it has worked out well — the surname a nod to punk band Minor Threat — with her now having an “easier time” understanding how to portray Jody Threat with confidence. In the beginning, she focused more on becoming comfortable with wrestling fundamentals and, more recently, has been able to shift attention to the character.

That character work also will be evident when Threat appears on a television show that is expected to debut in the fall. Not able to say much, she did confirm the show will be accessible both in Canada and the U.S.

“What I can say for sure, is it is a show that has been picked up by a network,” Threat said. “I am a character in this show. It’s a dark comedy. It’s hilarious. Kind of like a mockumentary, if you will.”

Threat will next be in action at Rebelution, an all-female show, Sept. 14 at the Don Kolov Area in Mississauga, Ontario. For more information, visit show’s Facebook event page.