TORONTO – While the veteran Japanese star CIMA may not be on the AEW All Out card on Saturday in Chicago, looking down the road he expects both himself and his students at Oriental Wrestling Entertainment to be involved in the weekly AEW television events starting in October on TNT.

CIMA (pronounced Shee-ma) knows that he owes his current gig in All Elite to the Young Bucks, Nick and Matt Jackson. 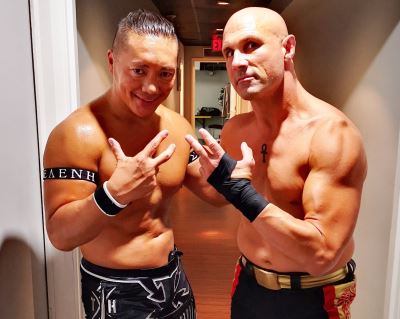 “AEW and Young Bucks are my long-time friends and Kenny Omega has always been nice to me. In my opinion, AEW, the sky’s the limit,” he said of AEW, while in Toronto for the first cards ever presented by OWE outside of China.

Asked who he wanted to face on the AEW roster, CIMA said, “everybody in AEW.”

On the shows in Toronto, CIMA teamed Christopher Daniels in one bout, beating Private Party (Isiah Kassidy and Marq Quen). He praised Daniels as a “20 years friend.” Does that make it easier, wrestling with someone that you have known for so long? “It’s not easy, however, CD and myself are always thinking. We try our best.” In another bout, he fought up-and-coming Canadian Daniel Makabe.

The 41-year-old star, born Nobuhiko Oshima, is being modest, of course. His accomplishments in the ring since his debut in 1997, particularly in Dragon Gate, need little boasting. He has won championships around the world and mentored and promoted current stars like Ricochet and PAC (Neville in WWE), who is on the All Out card, facing Omega.

His current role is not just as a wrestler, though. When Dragon Gate ceased operations he took two of his former students and current Strong Heart tag team partners, Lindaman and T-Hawk, with him to Shanghai, where the three of them are the trainers for OWE and have been tasked with making wrestlers out of Chinese athletes who know little about professional wrestling.

“My boys have a bright future. They were not comfortable taking those martial arts kicks at first,” explained CIMA about his Chinese students. “So, in my opinion, therefore, they have high potential.”

At the top of the heap, the single OWE talent brought to the shows in Toronto, is Gao Jinglia. He beat “Speedball” Mike Bailey in one bout, and Sammy Guevara in another. 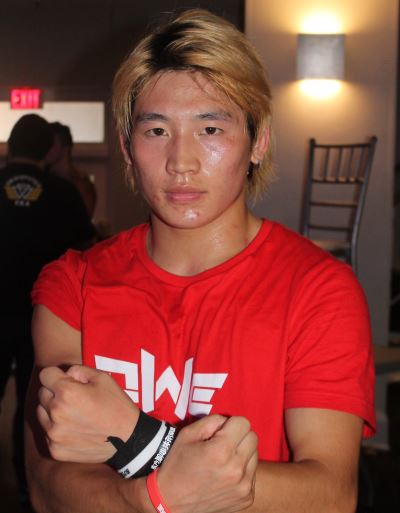 Gao Jinglia is the prized student of CIMA and other OWE trainers. Photo by Greg Oliver

CIMA called Gao Jinglia a “fast learner.” He’s been at it for two years, less a time on the sidelines with an injury. He started from scratch, reminded CIMA. “He didn’t know professional wrestling, so I taught him everything.”

The fans in China are similarly new to the action, he said. “They don’t know pro wrestling, we should be educating them too,” he said. What are they like? “Quiet, because, sometimes, one-two, after big move, one, two, kick-out, however, audience, no reaction, because they don’t know.”

Generally open to talk, though his command of speaking English is limited, CIMA did not want to get into politics, when as whether the Chinese government has much say in anything OWE does. “I don’t know details,” he said, adding that it was “not my job” to deal with it.

What his job really is, is trainer.

It took some thought to move to Shanghai.

“My family stays in Osaka, Japan. So we’re separate. Over one month, one time, two times, I travel and meet them,” he said. The flight from Shanghai to Osaka is a little over two hours, nothing compared to the long flights to wrestle in North America.

Through the years, CIMA did develop a good skill set for the travel. “I can sleep anywhere.” 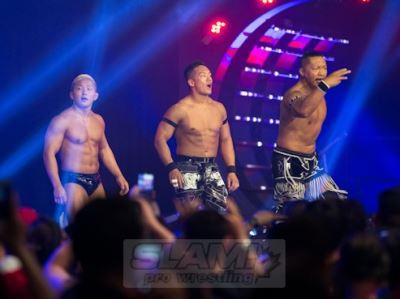 Plus, he mostly travels with his Strong Hearts companions, Lindaman and T-Hawk. “They are like my brothers. We work together … eat together.”

They also tour together. During their time in Toronto, the OWE crew took a bus down to Niagara Falls to see one of the wonders of the world (“Awesome” was how he described it). In a previous stop in Toronto, while working for DragonGate, CIMA didn’t get to see much of the city. This time, with four days between OWE shows, he did.

“I love Toronto,” he said, launching into a story—the longest answer of the interview.