Bull Nakano steals the show at The Summit

TORONTO – It’s never been a more exciting time to be a female wrestler in the business today. The women’s evolution far extends the boundaries of the WWE; independent promotions all over the world are producing high quality female athletes. However, if it weren’t for those who paved the way for these ladies, things may have been different. One of those trail blazers is Japanese legend Bull Nakano.

Nakano has inspired many women to get in the squared circle and prove what it means to hold true power. Over 300 people had the opportunity to witness this dominance on Saturday, August 10, at The Summit at The Met in mid-town Toronto. 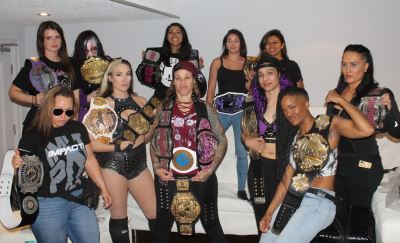 Championships were on display at The Summit on Saturday in Toronto. Photo by Greg Oliver

It was during the RISE Championship bout where the crowd got to see what the Japanese villain was all about. Ariel Monroe defeated Zoe Lucas for the title in a tough battle. Being the bratty cheerleader that she is, Lucas attempted to flee the ring with the belt. She stood dead in her tracks when Nakano came down the ramp with a pair of nunchucks and proceeded to beat Lucas down. Nakano grabbed the title, handed it to Monroe and walked out of the ring. Monroe’s face dropped and some members of the audience bowed to the legend.

Sitting quietly at the back of the room, the 51-year-old Nakano — who is considerably slimmed down from her dominant wrestling days — talked with SLAM! Wrestling about the experience, which included a seminar the day previous in London, Ontario.

“I really didn’t expect any of this,” Nakano said with an emotional tone and tears in her eyes. Sitting on the couch next to her nunchucks, she explained that it was important for her to be here, where she can see the product of what she helped create years ago.

“You really understand what they go through as wrestlers ” she continued, “and it touches my heart to see everyone cheer and clap for me out there.” 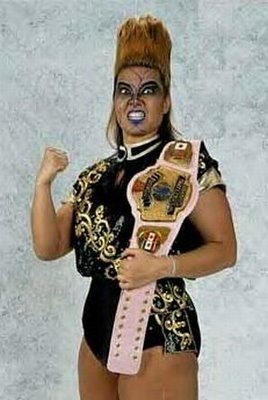 Nakano (real name Keiko Aoki) has a special connection to RISE Wrestling, as it was announced in 2017 that she would join the company as a facilitator along with Cheerleader Melissa Anderson, who was also present at The Summit. Nakano said that she never thought she would one day have this much affect on other women. “It’s a very good feeling to have, knowing that these women look up to me.”

It wasn’t just the wrestlers, either. Over 100 tickets were sold to the meet and greet with Nakano and the other women, with a tough starting time of 9 a.m. on a Saturday. Some came with their faces painted in Nakano’s distinct lines and colourful lipstick.

If you speak to any athlete that was in that venue on Saturday, they would all tell you the same thing.

“With Bull Nakano being here, it’s inspired all of us,” said Vanessa Kraven, a Canadian wrestler who has competed in several independent promotions. She highlighted that this event was a huge moment for all of them. “It just stands to show that women’s wrestling now is more prevalent than ever before.”

Smash Wrestling hosted the event, teaming up with U.S. based companies SHIMMER and RISE, along with Canada’s Femmes Fatales promotion. It was a unique showcase of the top female wrestlers in one event.

“It’s a little surreal,” said Alexia Nicole, who recently made an appearance on IMPACT! Wrestling. The Bubblegum Princess added that she never expected to be in the same place as Nakano and that it’s truly an honour to be in her presence. “I’m really happy to be a part of something like this and it’s a huge opportunity that I wanted to take advantage of.”

Nicole was not the only one who understands the influence that Nakano had on women’s wrestling. “I love working with Bull Nakano. She’s a legend in this business,” said Mercedes Martinez, the current Femmes Fatales champion. If you have the chance to learn from the best, Martinez advises to never turn it down. “Anybody who can be in a show with Bull or be associated with her really is lucky.” 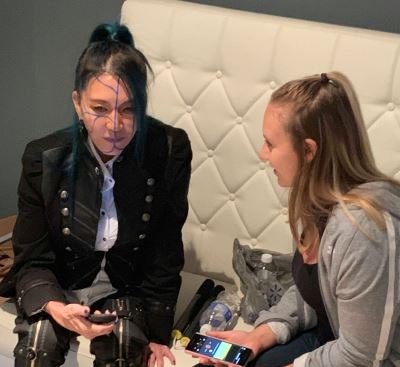 By the end of the show, everyone was on their feet applauding all the women that performed that day, but also to commemorate how far they’ve come. The year 2019 has definitely been a milestone onefor female wrestlers. The Summit was a celebration for those who made women’s wrestling what it is today and what it will be for years to come.