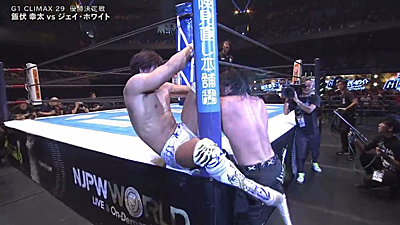 It was a busy G1 Climax finale. Not only do we have a winner of the tournament but a New Japan favourite made a run-in and Bullet Club recruited a new member.

Kota Ibushi defeated ‘Switchblade’ Jay White to become the winner of the G1 Climax 29 tournament. He is now guaranteed a main event spot at Wrestle Kingdom.

In a match that went over 30 minutes, White did hit Blade Runner but didn’t have the wherewithal to cover Ibushi. Ibushi fought out of a sleeper suplex by grabbing White’s wrists and head butting him.

Tanga delivered on his promise at the finals of the G1 Climax as Kenta joined Bullet Club.

When it looked like Ishii and Yoshi-Hashi had the match won, Kenta ran into the ring, gave Ishii a running knee to the face and a Go to Sleep. The crowd booed. Kenta smiled as Tama Tonga pinned Ishii. Kenta and Bullet Club beat down Yoshi-Hashi and some Young Lions.

Out of nowhere, Katsuyori Shibata stormed the ring knocking Kenta down with a haymaker to the face.

Shibata clobbered him with his running kick in the corner. Shibata threw off this shirt in anger as the crowd went wild.

Shibata pounded Kenta with shot after shot. Shibata took out all members of Bullet Club then nailed Kenta with running stalling drop kick.

Shibata was distracted by Gedo while he was putting Kenta to sleep. Kenta punted Shibata into next Tuesday. Gedo walloped Shibata with his kendo stick.

Absolutely disrespecting Shibata with his own pose, Kenta sat cross-legged on his chest. Kenta confirmed his entry into Bullet Club by throwing up their Too Sweet sign.

Tama Tonga blew his nose on Shibata’s shirt and threw into the audience.

“Get this s—t out of here,” scowled Tonga.

The crowd chanted and clapped for Shibata as he circled the ring in rage.

Since 2017, Shibata has taken on the role of coach with the New Japan LA dojo after he suffered a subdural hematoma and needed emergency surgery. The speculation has been that he would never wrestle again.

Shibata wasn’t the only one to take it on the chin at the G1 Climax. The feud between Juice Robinson and Jon Moxley escalated. Moxley did not take kindly to himself and Shota Umino losing to Toa Henare and Juice Robinson. He hit Robinson with the IWGP United States belt knocking him clear out of the ring.

“This guy belongs in a 1990’s jazzercise class. We are going to toughen him up,” said Moxley before he slammed Robinson through a table.

Karl Fredericks and Clark Connors beat Yota Tsuji and Ren Narita. In an intense battle of the American and Japanese dojos, Fredericks makes Tsuji submit to the Boston Crab. Everyone from the two sides gets into it pushing, shoving, suplexing each other. “That’s L.A. Dojo!” Connors shouts.