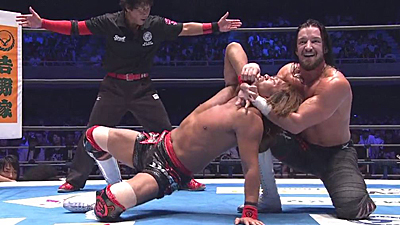 Much to the chagrin of those in the Nippon Budokan, Jay White is the B Block finalist. Fans booed and started filing out of the arena before White even had the time to address them and celebrate. White won his last six matches to secure the block win.

White will square off against Kota Ibushi to determine the winner of the G1 Climax 29 on Monday. The winner is rewarded with a spot in Wrestle Kingdom’s main event.

White beat the leader of Los Ingobernables de Japón, Tetsuya Naito, during their final match in the tournament. Hirooki Goto, Jon Moxley and Tetsuya Naito all finished in second with 10 points.

Following what seemed like 42 reversals, White hit the sleeper suplex, a Death Valley Driver and Blade Runner to advance to the finals.

To further humiliate Natio, White posed over him stealing his trademark eye-opening taunt.

“Naito. Naito. Tranquillo. Get him out of here. Get that piece of s—t out of here,” said White as Naito was led away. The crowd booed White.

“I told you. This is my G1. Even when I was down three to none, I told you,” White said admonishing the crowd.

White called out Ibushi. Ibushi obliged coming down to the ring to face his challenger. White promised that Gedo would not be involved in their match.

“I don’t believe it,” said Rocky Romero on commentary.

White offered to shake Ibushi’s hand. White took a swipe at Ibushi. Ibushi dodged launching a kick at White. White rolled to the other side of the ring.

“Ibushi, tomorrow at the G1 final you will breathe with the Switchblade,” White cackled.

Cobb’s power was just too much for Yano. Cobb stopped Yano’s low-blows to defeat him with Tour of the Islands.

Ishii takes everything Taichi can dish out except for Black Mephisto.

Moxley almost puts Robinson to sleep. Robinson holds onto the official’s pants to stop the count. Moxley argues with the referee. He wants to be declared the winner. Red Shoes refuses to call for the bell. Moxley has free reign to brutalize Robinson. Moxley fills the ring with plunder. While Moxley sets up a table in the ring, Juice rolls him up for the pin.

Goto hit the GTR then got cocky allowing Shingo to crush him with a Pumping Bomber and Last of the Dragon.