G1 Climax 29 Night 17: Ibushi and Okada battle for A Block 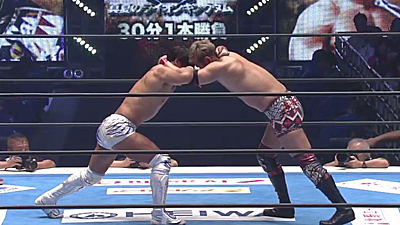 For the second year in a row the Golden Star is in the finals of the G1.

Ibushi will face either Hirooki Goto, Jay White, Jon Moxley or Tetsuya Naito in the finals of the tournament on Monday. The B Block finalist will be determined tomorrow.

The winner of the G1 Climax 29 tournament is rewarded with a spot in the main event of Wrestle Kingdom.

Ibushi was well on the road to beating Okada when he caught his drop kick in mid-air reversing it into a powerbomb. That didn’t pin Okada though. Okada got back into the fight by drop kicking Ibushi square in the jaw as he tried to deliver his Bomaye tribute to Shinsuke Nakamura.

Ibushi thwarted a Rainmaker with a high kick to the head. Even a second high kick, a jumping knee to the face and a Kamigoye couldn’t put Okada away. It took a second Kamigoye to beat him and for Ibushi to become the A Block winner.

“I will not lose. I will not go down the same path as I did last year. I will keep fighting to the very bitter end. That is something I promise all of you,” said Ibushi thanking the Nippon Budokan crowd and everyone he fought in A Block this year.

Archer now sports a Mohawk with some red braids. Archer beats Evil with the EVD claw. Young Lions rush into the ring to break the hold. Archer puts the hold on a Young Lion.

Sanada wraps up Owens and Gedo in Paradise Locks. Fale rises to use an inside cradle to pin Sanada.

The Most Electrifying Wrestling in the World Today defeats Kenta with one of his thrilling submission holds.

Hiroshi Tanahashi Versus Will Ospreay

An amazing Hook Kick, a Hidden Blade and a Storm Breaker give Ospreay the win in one of the greatest matches of his career. If you have any doubt that Will Ospreay is one of the very best wrestlers today, watch this match.

Suzuki-gun (Yoshinobu Kanemaru, Minoru Suzuki and Taichi beat Yoshi-Hashi, Hirooki Goto and Tomohiro Ishii). Suzuki pinned Yoshi-Hashi with the Gotch Piledriver. Ishii and Taichi have a stare down. They grab each other by the throat.

Los Ingobernables de Japón (Bushi, Shingo Takagi and Tetsuya Naito) defeated Bullet Club (Chase Owens, Yujiro Takahashi and Jay White). Shingo won the match for his team with the Pumping Bomber and Made in Japan. Jay White told Naito he will be his Destino tomorrow night. He is the last win White needs. Naito asked White to speak in Spanish. “Do you believe this mother—-r?” White said to the camera. Naito spit in White’s face.