TORONTO – ROH mainstays Mark and Jay Briscoe managed to narrowly retain their ROH World Tag Team Championships after fending off the Guerillas of Destiny in the tenth-ever ROH Ladder Wars match. The two ROH brothers left the match bloody and bruised and brought the Toronto crowd to their feet several times. 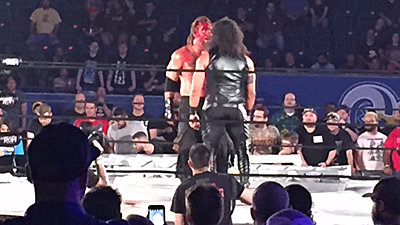 The Briscoes rushed G.O.D. before the bell even rang, and soon chairs and other weapons were flying. The sound of chairs hitting flesh reverberated throughout the arena several times, and it didn’t take long before both Briscoes had, as J.R. would put it, dawned crimson masks. But that didn’t deter the Briscoes, who continued to fight as hard as they could. Despite being thrown onto ladders, barricades, through tables, and off the top of one ladder, they persevered, showing the guts and determination that have made them such big stars in ROH. 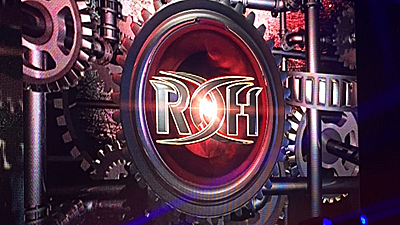 Before the first televised match began, all the ROH staff and wrestlers came out for a ten-bell salute to honor the memory of Harley Race, who passed away a few days ago. This was a fitting show of respect to one of the toughest and most revered individuals in wrestling history.

To the surprise of no one, PCO was adored by the Toronto audience, who cheered his name repeatedly and roared whenever he did anything in the ring. After some generic tag team wrestling, Villain Enterprises won the match after PCO hit a gorgeous moonsault from the top rope.

The former Justin Gabriel was ready to wrestle when Silas Young came out and cut a promo on Black and the fans. Young said Black wasn’t worthy of wrestling him and left. Black wanted to wrestle all the same and issued an open challenge, which was answered by ‘The Villain’ himself. The two of them had a fantastic technical match, with Black getting several near-falls. This match made Black look great and demonstrated why he was so underused in WWE years ago.

Steelz showed great intensity, but this contest felt decidedly average. The crowd was much quieter following the Black-Scurll contest that happened just before, which hurt this match. Klein looked to be in control for the majority of it, and hit enough big moves to win in dominant fashion. After it ended, Angelina Love attacked both of them and posed with the belt.

The story here was that Gresham had something to prove to his partner, ROH veteran Jay Lethal. He did so by living up to his nickname ‘The Octopus’ and seemed to have an answer for everything LifeBlood threw at him. That proved true until Bandido came in, and the two of them had a classic ROH technical exchange that got a standing ovation from the crowd. These wrestlers also showcased their creativity throughout the contest, especially when Bandido Powerbombed Gresham onto Lethal as Lethal had Haskins in a Figure-4 Leglock. The story continued as Gresham shoved his partner Lethal away to try and prove he could win, but that ended up playing into LifeBlood’s hands. In the end, Lifeblood won when Haskins locked in a Sharpshooter (because, Canada) to score an impressive win.

Tracy Williams came out for a match, but was attacked by a weapon-wielding Flip Gordon. This was presented in a way that was meant to make fans boo Flip, but that was a hard thing to do. After all, the fans were already chanting his name during PJ Black’s open challenge earlier in the night, so making him into a heel is proving to be more difficult than originally thought.

This was the polar opposite of their G1 Supercard match in that this one lasted almost twenty minutes. They brawled all over the arena and into the stands, knocking over guardrails as they did. RUSH won after hitting his Bull’s Horns finisher, winning in decisive fashion and seemingly putting an end to this feud.

Despite being injured earlier in the show, Tracy Williams insisted on facing Taylor for the title. That injury was central to this match’s story, as Taylor targeted Williams’ shoulder several times. No matter what Williams did, he couldn’t get any sort of advantage or momentum going, which allowed Taylor to retain his title with little difficulty. 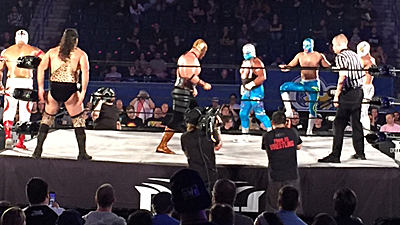 There was no story in this match: it was simply six luchadors showcasing their style. Although the match was somewhat chaotic (there didn’t appear to be any rules on double-team moves or multiple people being in the ring at the same time), that didn’t take away from the action. This match was filled with impressive aerial maneuvers, graceful dives, high-speed reversals, and lightning-quick changes in advantage. It was the perfect way for CMLL to showcase its talent and style, which might someday gain a solid foothold in the Toronto wrestling market.

Taven & Shelley had the ‘purest’ ROH match of the entire card. It had all the elements of a classic ROH wrestling bout: technical exchanges at the beginning, limb targeting, outside dives, someone being thrown into the guardrail, and countless near-falls that brought the crowd to their feet. Shelley had the World Title won many times, yet Taven continued to find a way to kick out of Shelley’s offense. In the end, it took three Climaxes from Taven to keep Shelley down for the three-count.

After his win, Taven cut a promo saying no one was worthy of challenging him now, only to be interrupted by RUSH. After a brief staredown, Taven left the ring and RUSH stood tall. It looks like this will be the next world title feud for ROH.